Livelihood protection for citizens aimed at 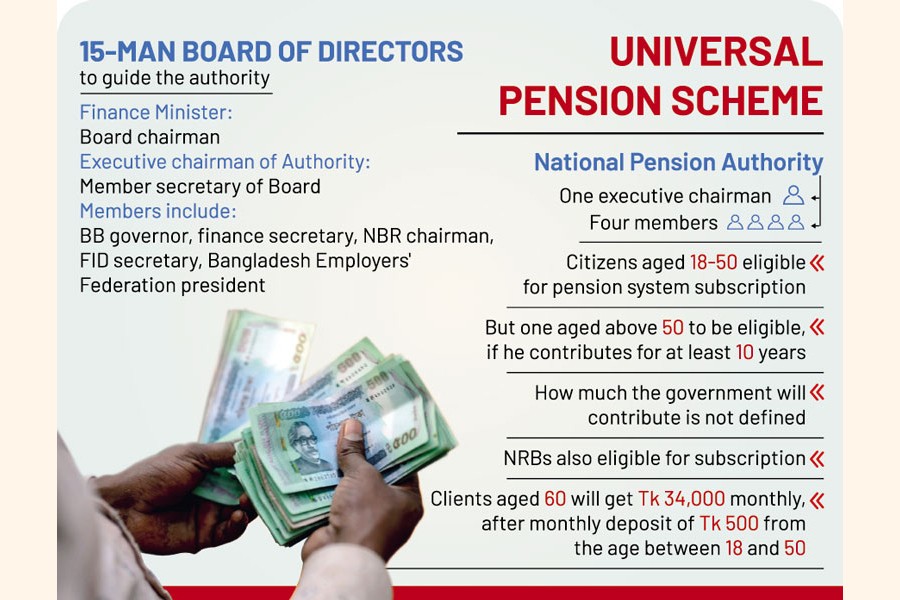 Bangladesh is introducing universal pension to expand economic protection for the citizens, although the option is now voluntary, as parliament passed the bill Tuesday to this effect.

Under provision of the much-hyped Universal Pension Management Bill 2023, National Pension Authority will be constituted. The Authority consists of four members and one executive chairman.

Citizens aged between 18 and 50 will be eligible for the contributory pension system.

But a person aged above 50 years will also be eligible for the facility provided that they contribute to the pension fund for at least 10 years. After death of the clients, the nominee will get certain defined benefits.

The lawmakers argued that how much money will be contributed by government is not defined.

The organogram also incorporates, among others, the Bangladesh Bank governor, the finance secretary, the National Board of Revenue chairman, secretary of the Financial Institutions Division, and the Bangladesh Employers' Federation president.

The governing body will hold at least three meetings a year.

The pension fund will be formed with the subscriptions of both registered clients and institutions. The government will provide grants for the poor and insolvent citizens. The fund will grow with the yearly profits from the investment of the money. The fund will draw yearly inflow from the clients as well.

Non-resident Bangladeshis will also be eligible for registering into the pension system.

The employees who are now working under a company may shift the account to other company when they join another organisation. They will get the facility to transfer the account. That is to say, they need not open new accounts.

The Authority will fix the minimum premium rate for the clients.

Placing the bill, the finance minister said the bill has been elaborately discussed at the parliamentary standing committee and then the minister rejected the proposal of seeking public review.

The Finance Division prepared the draft of the bill, which seeks to provide "financial security to the growing elderly population in case of unemployment, disease, paralysis or penury".

The inclusion in this pension scheme will be voluntary unless the government issues a gazette for making it compulsory.

If an elderly person dies before the age of 75, the nominee will get the pension for the remaining period.

Finance Minister AHM Mustafa Kamal had placed the bill in the House in August last. In its budget speech of this fiscal year the minister said universal pension scheme for citizens aged 61 and above will be introduced from fiscal 2022-23.