Eminent economist Prof Rehman Sobhan observed on Thursday that larger members of the South Asia are losing faith in the regional entity and looking for alternative groupings.

"The very idea of a South Asian community is receding," he said while delivering a keynote speech in a special session in memory of Saman Kelegama on the last day of 10th South Asia Economic Summit (SAES X) in Kathmandu, the capital of Nepal. 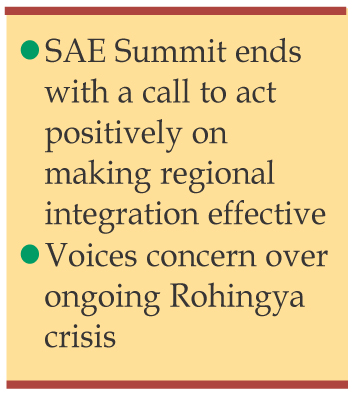 "Today the member governments of SAARC (South Asian Association for Regional Cooperation), particularly its larger members, appear to have lost faith in the regional entity which brought them together and are looking towards alternative regional grouping both within and beyond South Asia," he added.

Afghanistan, Bangladesh, Bhutan, India, Maldives, Nepal, Pakistan and Sri Lanka are the members of the SAARC.

Pointing out that the current move away from SAARC is not a new phenomenon, the senior economist urged the civil society leaders in the region to be proactive to keep the idea of South Asia alive.

To keep the idea alive, the chairman of the Centre for Policy Dialogue (CPD) also suggested sustainable engagement going beyond research skills.

"In my view, the idea of South Asia can only be kept alive if it remains embedded in your professional concerns and institutional priorities," he told the audience.

In this connection, he also recalled late Kelegama's commitment and contribution to moving the agenda of regional cooperation and integration.

Against the backdrop, the SAES X concluded Thursday evening in Kathmandu with a call to the leaders of the regional countries to act positively on making the regional integration process a success and effective.

Participants in the three-day summit also argued that rationale for regional integration is stronger now for inclusive and sustainable development and greater welfare of the people in the region.

At the closing session of the summit on Thursday evening, speakers also added that challenges like the impact of climate change can't be dealt with by any country alone and it requires regional cooperation.

Kathmandu-based South Asia Watch on Trade, Economics and Environment (SAWTEE), in association with National Planning Commission and the Ministry of Commerce of the Government of Nepal organised the three-day summit.

Dr Posh Raj Pandey, chairman of the SAWTEE, made concluding remarks in the closing session.

The 11th summit will take place in Pakistan at the end of next year.

Earlier in the morning, a plenary session took place to discuss the potential role of SAARC observers in regional integration process.

Dr Debapriya Bhattacharya, distinguished fellow of CPD, moderated the session where some of the discussants expressed grave concern over ongoing Rohingya crisis and influx of Rohingya people into Bangladesh from Myanmar.

They cautioned that Rohingya crisis may cause new kind of problem and terror across the region.

"Rohingya crisis will not only impact Bangladesh but also the whole region," said Dr Najma Afzal, a member of the provincial assembly of Punjab in Pakistan.