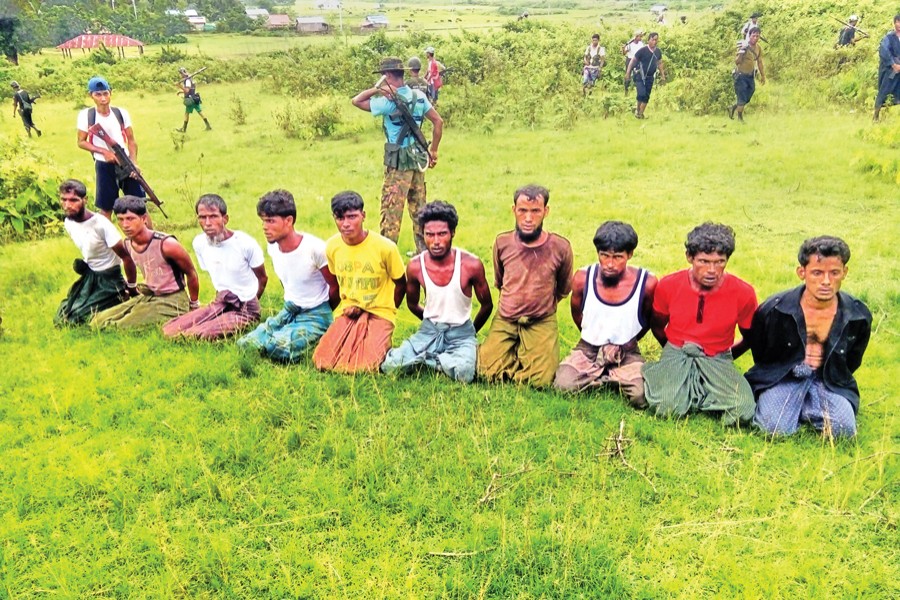 Ten Rohingya Muslim men with their hands bound behind their back kneel while members of the Myanmar security forces stand guard in Inn Din village on September 2, 2017. They all were later executed. — Reuters

INN DIN, Myanmar: Bound together, the 10 Rohingya Muslim captives watched their Buddhist neighbors dig a shallow grave. Soon afterwards, on the morning of Septtember 2, all 10 lay dead. At least two were hacked to death by Buddhist villagers. The rest were shot by Myanmar troops, two of the gravediggers said.

"One grave for 10 people," said Soe Chay, 55, a retired soldier from Inn Din's Rakhine Buddhist community who said he helped dig the pit and saw the killings. The soldiers shot each man two or three times, he said. "When they were being buried, some were still making noises. Others were already dead."

The killings in the coastal village of Inn Din marked another bloody episode in the ethnic violence sweeping northern Rakhine state, on Myanmar's western fringe. Nearly 690,000 Rohingya Muslims have fled their villages and crossed the border into Bangladesh since August. None of Inn Din's 6,000 Rohingya remained in the village as of October.

The Rohingya accuse the army of arson, rapes and killings aimed at rubbing them out of existence in this mainly Buddhist nation of 53 million. The United Nations has said the army may have committed genocide; the United States has called the action ethnic cleansing. Myanmar says its "clearance operation" is a legitimate response to attacks by Rohingya insurgents.

Reuters has pieced together what happened in Inn Din in the days leading up to the killing of the 10 Rohingya - eight men and two high school students in their late teens.

Until now, accounts of the violence against the Rohingya in Rakhine state have been provided only by its victims. The Reuters reconstruction draws for the first time on interviews with Buddhist villagers who confessed to torching Rohingya homes, burying bodies and killing Muslims.

This account also marks the first time soldiers and paramilitary police have been implicated by testimony from security personnel themselves. Members of the paramilitary police gave Reuters insider descriptions of the operation to drive out the Rohingya from Inn Din, confirming that the military played the lead role in the campaign.

The slain men's families, now sheltering in Bangladesh refugee camps, identified the victims through photographs shown to them by Reuters.

The dead men were fishermen, shopkeepers, the two teenage students and an Islamic teacher.

Three photographs, provided to Reuters by a Buddhist village elder, capture key moments in the massacre at Inn Din, from the Rohingya men's detention by soldiers in the early evening of Sept. 1 to their execution shortly after 10 a.m. on September 2. Two photos - one taken the first day, the other on the day of the killings - show the 10 captives lined up in a row, kneeling. The final photograph shows the men's bloodied bodies piled in the shallow grave.

The Reuters investigation of the Inn Din massacre was what prompted Myanmar police authorities to arrest two of the news agency's reporters. The reporters, Burmese citizens Wa Lone and Kyaw Soe Oo, were detained on December 12 for allegedly obtaining confidential documents relating to Rakhine.

Then, on Jan. 10, the military issued a statement that confirmed portions of what Wa Lone, Kyaw Soe Oo and their colleagues were preparing to report, acknowledging that 10 Rohingya men were massacred in the village. It confirmed that Buddhist villagers attacked some of the men with swords and soldiers shot the others dead.

The statement coincided with an application to the court by prosecutors to charge Wa Lone and Kyaw Soe Oo under Myanmar's Official Secrets Act, which dates back to the time of colonial British rule. The charges carry a maximum 14-year prison sentence.