Suggesting structural change in formulation of the national budget, the country's renowned economist Professor Dr Rehman Sobhan said on Thursday the existing budget practice is more in the nature of a drama (natok).

A group of the parliamentarians, in the budget making system, praise the finance minister regarding the budget without knowing what is going to be delivered.

Mr Sobhan made the remarks while expressing his observations over the budget in a webinar - 'Social protection and employment in budget FY2021-22: Was the focus adequate?' 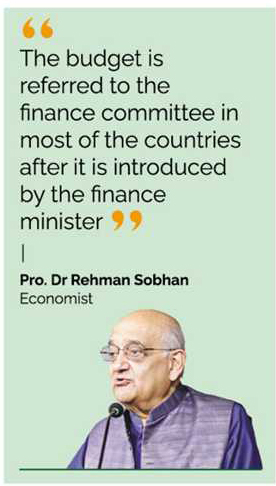 Expressing dissatisfaction over very little discussion on the budget in the parliament, Dr Rehman Sobhan further said the budget is referred to the finance committee in most of the countries after it is introduced by the finance minister.

The finance committee intensively analyses and discusses the budget with economists, professionals and grass-root people, takes their intakes, and incorporates those into a report that the committee presents to the house before the final approval.

"We all know that the budget here is more in the nature of a drama, where, in fact, discussion takes place, quite a number of MPs come, and say I want to have a project in my area."

Half of the MPs praised the finance minister without knowing what it actually contributed, and very few people would have 10 minutes to make discussion on the budget.

Sharing previous experiences, he said they used to have dialogue about the budget with the finance minister.

"At present, the minister is missing in action, even in the civil society dialogue."

The economist suggested a structural change in budget formulation to make it more participatory.

Parliamentarian Rashed Khan Menon said the structure of budget discussion needs to be changed. They have raised the issue on several occasions in the past, but have not seen any result.

He also said the immediate past finance minister held dialogues with some groups, including the civil society, but such dialogues have not been taking place over the last few years.

"Budget discussion in the parliament is actually meaningless. It is not possible to discuss the whole budget in just 10 minutes, as it is a huge task."

"It's not a drama. It is a stage-managed scene happening," added Mr Menon, also chairman of the parliamentary standing committee on ministry of social welfare.

"There are too many affluent individuals, who are not paying tax; and it is very unfortunate. If we can bring more people into the tax net, we will be able to spend more on social protection."

The budget making process has become a bureaucrat-dependent system, which is not a good sign for the country at all, he noted.

DCCI former president Shams Mahmud said economists and scholars say that the poverty rate has gone up over 35 per cent from the previous 20 per cent due to adverse impact of the coronavirus pandemic.

He said investment is not taking place because of improper business policy although money has become cheaper after a cut in the interest rate.

Mr Shams Mahmud hailed the proposed corporate tax cut in the national budget. "But it should have been linked with job retention," he added.

Professor Dr Laila Ashrafun of Shahjalal University of Science and Technology said the traditional way of budget making would bring little for the people in different regions.

"We need to go to the regions, understand nature of the problems that people are facing, and make a budget to have better outcomes. So we need dialogues," she added.

"If we exclude two other programmes - savings certificate interest assistant and agriculture subsidy, the social protection budget will be as low as 1.9 per cent," he added.

But the government found no increase in poverty, which was very contradictory, she said, expressing her surprise over lower allocation for health sector event in the Covid time.