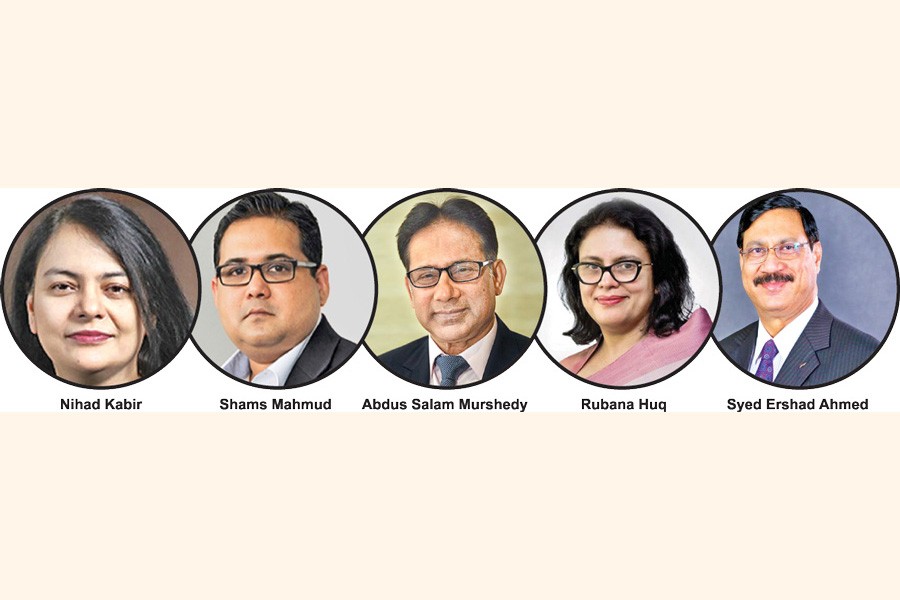 Business leaders have hailed the just-announced budget, saying it has addressed the impacts of Covid-19 and recovery measures from the crisis well.

Some, however, were sceptical about its implementation and termed the fiscal blueprint ambitious.

The Metropolitan Chamber of Commerce and Industry, Dhaka (MCCI) hailed some tax measures in the budget, including the individual's tax-free threshold and corporate tax reduction.

President Nihad Kabir told the FE on Thursday the government now needs to focus on how the budgetary measures will be implemented so that the country can make a speedy recovery from the current public health exigency.

She said the source tax is reduced for all export sectors, but there will be no significant benefits if the advanced income tax on the domestic industry is not curtailed.

Ms Kabir said though the allocation for the health sector has been slightly increased, "doubling or tripling the allocation would not bring any success without building up the capacity".

She emphasised proper utilisation of the allocations made for the education sector, especially to train up and develop the skills of youths.

Although the Dhaka Chamber of Commerce and Industry (DCCI) called the budget friendlier to both business and people, it found it "an ambitious recipe" for the next fiscal year.

The chamber's president Shams Mahmud, in his initial budget reaction, said the budget has set a GDP growth target at 8.2 per cent and that of inflation at 5.4 per cent.

"...the budget is a progressive and higher growth-oriented, which is appreciable," he said.

He also appreciated the initiatives offered for boosting investment and employment.

The budget is inclusive, though its expenditure is huge and it aims to increase investment, stimulus to the entrepreneurs, ensure social safety-net," he said.

He argued the implementation of this huge budget is a big challenge: "we need to re-consider revenue the collection target."

He hailed the proposal for lifting tax-free individual income slab, which may ease burden on taxpayers and more taxable people will be encouraged to pay levies.

Lauding the corporate tax cut by 2.5 per cent for non-listed companies, the DCCI president suggested the government consider a bit further so that entrepreneurs can sustain in post-Covid-19 era.

The Bangladesh Garment Manufacturers and Exporters Association (BGMEA) has welcomed the expenses of the in these challenging times.

In her instant reaction, the association's president Dr Rubana Huq hailed the decision on keeping corporate tax rate unchanged for the apparel sector.

It praised the continuation of the 1.0 per cent extra incentives, reducing tax on yarn, VAT waiver of PPEs and masks production, continuing zero duty on cotton import, VAT rebate on the import of RFID tags, industrial rake, and cutting table.

The BGMEA, however, requested the government not to raise tax at source to 0.50 per cent from the existing 0.25 per cent.

The American Chamber of Commerce in Bangladesh (AmCham), in its reaction, hailed the government to take certain measures for protecting critical domestic industries in crisis.

The chamber, however, said the uncertainty over Covid-19 and consequent repercussions are creating added pressure on the economy.

AmCham president Syed Ershad Ahmed, in his reaction, demanded automation and introduction of e-payment and e-TDS system, reduction of the number of VAT payments from monthly to quarterly, modernisation of the customs law and disputes, and facilitating foreign direct investment.

President of the Exporters Association of Bangladesh (EAB) Abdus Salam Murshedy hailed the proposed budget, saying that the impacts of Covid-19 and recovery were well considered in the budget.

"The wellbeing of people has been taken into consideration in the budget and all sectors got required allocations," he said.

The Association of Mobile Telecom Operators of Bangladesh (AMTOB) said the government is weakening the mobile sector by imposing tax burden regularly and creating pressure on users.

In his instant reaction, the association' secretary-general S M Farhad said the goal of doubling the current 7.0 per cent contribution of the mobile sector to the country's GDP may not be achieved.

"This year, the government has increased the supplementary duty on all mobile services from 10 per cent to 15 per cent, which is very disappointing," he said adding this will put extra pressure on customers.

He requested the government to reconsider the budget proposal for the telecom sector.

"We demanded Tk 250 billion as rescue package for the aviation, tourism and hospitality industry. Biman alone demanded Tk 50 billion. But finally the government has allocated such an amount, which is not enough for the promotion and recovery of the aviation and tourism sector," he said.