BD plans to raise issue in talks with China, India 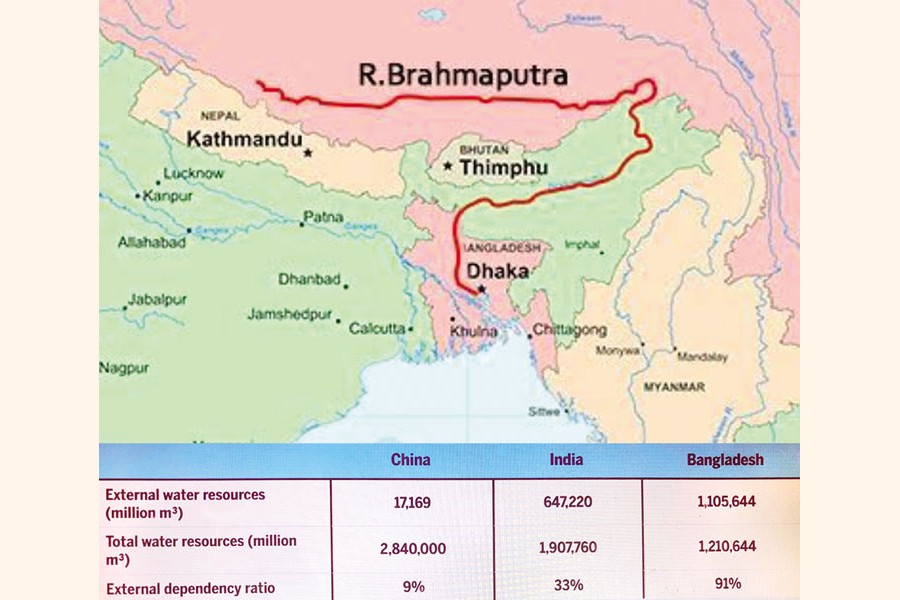 Concerned over the moves by China and India to construct dams in the upstream of the Brahmaputra River, Bangladesh is planning to raise the issue in the upcoming water talks with both the countries.

Bangladesh is heavily dependent on external sources for water. The 1,800-km-long Brahmaputra, which enters Bangladesh from India after originating from Tibet region under China, is the largest source of external water for Bangladesh.

If both the countries withdraw water in the upstream from the Brahmaputra, Bangladesh will be a barren land, environmentalists said.

The total water resource of Bangladesh is estimated at 12,10,644 million cubic metres, of which 11,05,644 cubic metres come from external sources.

According to statistics, at least 60 percent of Bangladesh's population relies on the Brahmaputra's catchment basin.

A catchment or basin is an ecological system of drainage that sees rainfall or river water drained into the surrounding environment, and can be accessed through lakes, wells or small tributary rivers.

"We will talk to India first. The Indian water resources minister will visit Dhaka soon, and we will discuss about the issue of construction of dams in the upstream of the Brahmaputra," state minister for water resources Zahid Farook told the FE.

"If China constructs a dam in the upstream, then definitely India will have concern. Similarly, if India and China both go ahead with such dam projects, Bangladesh will have concern. But we want to resolve the issue amicably through discussion."

"It is well known to all that withdrawal of water in the upstream of any common river will seriously impact the countries in the downstream. So, we consider this a matter of concern," Mr Zahid added.

Officials said constructing dams in the upstream means that the countries concerned will have the leverage to withdraw or release water as per their requirement.

"We may see heavy water flow when we do not need water, and there might be no water in the dry season when we require it most," a senior official of the Ministry of Water Resources said while presenting the worst scenario.

China first disclosed its plan to construct a dam on the Brahmaputra (in Yarlung Zangbo), when Yan Zhiyong, chairman of the Power Construction Corp of China or POWERCHINA said China would implement its hydropower exploration plan in the downstream of the international river.

"There is no parallel in history…it will be a historic opportunity for the Chinese hydropower industry," Yan was quoted as saying by the Chinese media.

The new dam is planned to produce at least 60 gigawatts (GW) of electricity. To put that into perspective, one GW is the quantity of energy captured by 3.125 million solar panels or 412 wind turbines. One GW is also enough to power 110 million LED lights, said an analyst.

Later, in March this year, China's parliament adopted the 14th five-year plan, which included the hydropower project on the Brahmaputra in Tibet near India's Arunachal Pradesh.

Chinese officials also hinted that the construction work of the dam might start this year.

But India was apparently not appeased by the Chinese assurances in this regard, and responded with the announcement of its plan to construct another dam on the Brahmaputra in Arunachal soon after the disclosure of the Chinese plan.

T S Mehra, a senior official in India's federal water ministry, told media in December that they had proposed construction of a hydro-electric dam with 10-GW capacity in Arunachal to mitigate adverse impact of the Chinese dam project.

"Our proposal is under consideration at the highest level of the government."

The planned dam would create a large water storage capacity in India to offset effect of the Chinese dam on water flow, he added.

However, Dr Ainun Nishat, leading environment expert of the country, looks at the issue from a different angle.

If China is going to produce electricity through constructing a dam on the Brahmaputra in the upstream, Bangladesh can negotiate to have a share in the project, he said.

"We can invest partly, and have a share of the power generated from the project. India can also join us, so that the negative effect of the project can also be minimised through consultations."

About campaigns against construction of the proposed dams, he said dams are essential for many reasons, including flood management.

"I am not against construction of dams, but the dams should be constructed in a manner so that these will not cause serious harm to ecology and locality."

"Previously dams were built according to the design of engineers, but now we suggest stakeholders' consultation before designing a dam," he added.

On the other hand, Chinese officials said they would address the concern of both India and Bangladesh in this issue.

Soon after the disclosure of the dam building plan, Chinese foreign ministry spokesperson Hua Chunying was asked about it in a media briefing in Beijing.

She said, "Hydropower development in the lower reaches of the Yarlung Zangbo River is China's legitimate right. When it comes to use and development of cross-border rivers, China always acts responsibly."

China has a policy featuring development and conservation, and all projects will go through science-based planning and assessment, giving full consideration to impact downstream and accommodating interests of both the upstream and downstream regions.

The development of the lower reaches of the Yarlung Zangbo is in the early stages of planning and assessment, she noted.

"There is no need to read too much into that."

Regarding the concerns in India and Bangladesh, she said, "For a long time, China, India and Bangladesh have had good cooperation in sharing hydrological information, flood and disaster reduction and contingency management. We will continue our communication through existing channels."

"There is no need for any anxiety in this matter," she added.

According to international law, the countries that are upstream of a river have the sovereignty to build dams on their stretch of water, even though it may impact the countries further downstream.

However, the right is balanced by the principles of 'reasonable use' and 'no harm'.

But China is not a party to the UN Convention on the Protection and Use of Transboundary Watercourses and International Lakes.