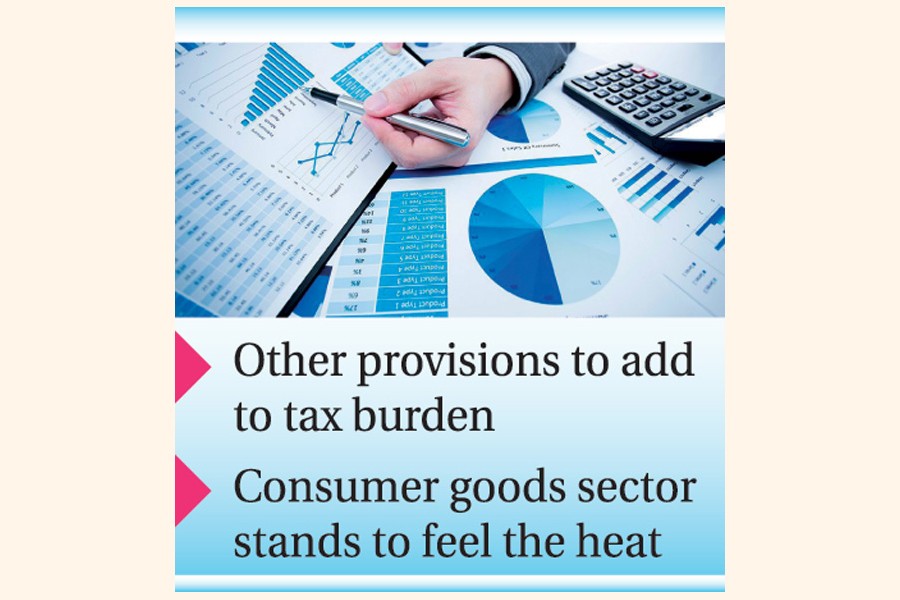 Slashing of corporate tax in the budget is unlikely to help bring down the effective tax rates of companies, hamstrung by a set of new provisions.

Despite the cutback on corporate tax for non-listed firms, the effective tax rate of a company could go up to 40 per cent in FY 2021, said businesses and tax experts.

Officials of the National Board of Revenue NBR implicitly agreed, saying there would be no significant loss in the collection of direct taxes, despite offering a set of tax benefits in the budget.

The benefits include a 2.5 per cent cut in corporate tax for non-listed firms, increase in tax-free threshold for individual taxpayers to Tk 0.3 million, a new tax rate 5.0 per cent for marginal taxpayers, bringing down the highest slab of income tax rate by 5.0 per cent, etc.

Businesses said the tax on promotional expenses may cause increase of effective tax rates ranging from 6.0 per cent to 40 per cent depending on the profit base of 5.0 per cent to 30 per cent.

The Foreign Investors Chamber of Commerce and Industry or FICCI, in a recent analysis, found the increase in effective tax rate.

As per the newly incorporated provision, section 30 (O) of income tax ordinance-1984, any promotional expenses exceeding 0.5 per cent of the disclosed business turnover will be considered inadmissible or taxable expenses.

Fast-moving consumer goods and similar industries spend around 5.0 per cent to 10 per cent of its turnover as promotional expenses, which have been established locally and internationally as one of the key drivers of consumer goods sales, said FICCI president Rupali Chowdhury.

If the consumer goods and other sectors want to minimise the tax cost on promotional activities, they will have reduced more than 90 per cent such activities, she said.

If the fiscal measure comes into force, thousands of people will lose their jobs who are employed to provide promotional goods and services, she added.

She argued all legitimate promotional expenses should be considered allowable expenses.

"It's like killing the golden goose. Such a measure would discourage new foreign investment too as investors rely on word of mouth of the existing investors," he added.

He said such measures should be reconsidered while passing the finance bill-2020 for the sake of COVID-hit businesses.

For reconsidering the fiscal measures, the FICCI president on June 17 sent a set of proposals to the finance minister, the NBR chairman and the private sector adviser to the Prime Minister.

Talking to FE, Adeeb H Khan, tariff and taxation subcommittee chair of the Metropolitan Chamber of Commerce and Industry or MCCI, Dhaka, said the imposition of taxes on promotional expenses would push up the effective tax rate of a company in the upcoming fiscal.

"I appreciate the proposed reduction of corporate tax rates for the vast majority, but new taxes in other areas would axe the benefits," he said.

Minimum tax rate is high in Bangladesh, with real tax rate going up to 50 per cent, in some cases, while imposed tax rate is 35 per cent in the law, he added.

Former president of the Institute of Chartered Accountants of Bangladesh Humayun Kabir said the reduction in corporate tax rate would help the country improve its indicators in the Ease of Doing Business Index of the World Bank.

He, however, said the enhancement of sources taxes and fiscal measure on promotional expenses may increase tax burden while offsetting the benefits of rate cut.

In the budget, the NBR has withdrawn the reduced tax benefit for new 12 commercial banks that got licence after 2013.

ICAB fellow member Snehasish Barua warned the impact of capping 'promotional expenses' and 'overseas travelling' up to 0.5 per cent of turnover can be detrimental from a business perspective.

In the post-Covid period, when businesses would need more proactive participation in the global market and can achieve so through foreign tours and travels while promoting their products and services, fixing a limit in case of claiming such expenses will hinder their profitability, especially for companies having lower profit margins, he said.

"This could gravely impact our international competitiveness to attract more FDI. In our neighbouring countries, no such provisions exist," he said.