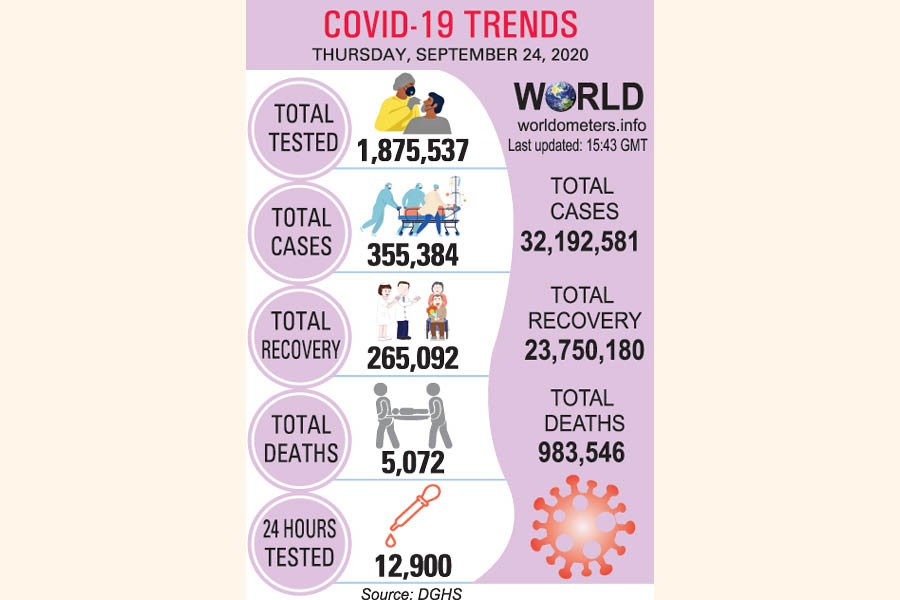 The entire caseload of coronavirus infections in the country reached 3,55,384 with 1,540 more people infected afresh in the last 24 hours ending on Thursday noon.

According to the Directorate General of Health Services (DGHS), the latest infections were recorded from a total of 12,900 samples tested during the period, and the infection rate was 11.94 per cent.

At the same time, 28 more patients succumbed due to the respiratory disease caused by the new virus. The latest fatalities took the death toll to 5,072 in Bangladesh, which now stands eighth in terms of deaths.

Although the number of infections kept falling in recent weeks, the rate is still above the danger level, according to the healthcare professionals.

Subsequently, the vacancy in the Covid-dedicated hospitals keeps widening gradually, as almost 80 per cent of the hospital beds remain empty.

According to the DGHS data, there were 13,618 dedicated beds across the country for coronavirus patients as of September 24, but only 2,668 of them were occupied by the patients.

The number of empty beds has been increasing fast because of sharp rise in the number of recovered persons. The tally now reached 2,65,092.

The DGHS daily health bulletin, issued on Thursday, said a total of 12,900 samples were tested across the country since Wednesday morning.

With the tests, a total of 18,75,537 samples have so far been tested here, and the infection rate was as high as 18.95 per cent, which is second highest in South Asia after India.

Of the tests, some 1,540 samples were found Covid-19 positive along with 28 more deaths recorded during the period, it noted.

"With these numbers, the overall tally of confirmed cases and deaths rose to 3,55,384 and 5,072 respectively," mentioned the bulletin, signed by DGHS additional director general Dr Nasima Sultana.

Seventeen of the latest deaths were recorded in Dhaka division, followed by six in Chattogram, two in Khulna, and one each in Sylhet, Rajshahi and Rangpur divisions, the bulletin added.

Globally, more than 32.1 million people have been infected by the novel coronavirus and 9,82,442 have died until Thursday 4:30 pm, according to Worldometer info.