Dhaka may turn to WTO for redressal 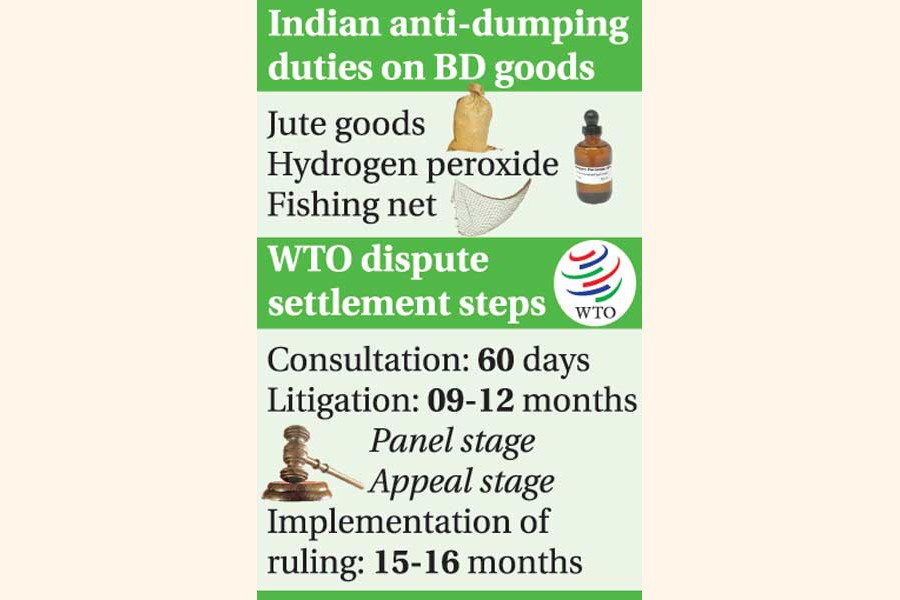 As India declined to lift the anti-dumping duty on Bangladeshi goods, the commerce ministry high-ups have asked one of its wings to start dispute settlement procedure in the World Trade Organisation (WTO).

India turned down Bangladesh's plea to withdraw the anti-dumping duty on jute goods, hydrogen peroxide and fishing net at the bilateral commerce secretary level meeting held in New Delhi in mid-January this year.

Officials said the WTO Cell of the commerce ministry has been asked to recourse to the dispute settlement procedure as per the suggestion of the Bangladesh Tariff Commission (BTC).

The BTC in a report in July last said India imposed the anti-dumping duty, "violating the WTO rules".

If WTO dispute settlement procedure can be started after taking legal advice from Advisory Centre on WTO Law (ACWL), it said, India may lift the anti-dumping duty.

"We are waiting for approval from the minister to start legal proceedings formally," a senior commerce ministry official said.

Another official said Bangladesh made all possible efforts for withdrawal of the anti-dumping duties but India paid no heed to neighbour's request.

"Now there is no alternative but to go to the WTO seeking remedy," he added.

Back in January 2017, India slapped the anti-dumping duty on Bangladesh's jute yarn, hessian and bags ranging between $19 and $352 per tonne.

After one year, India also put anti-dumping duty, $2.69 per kilogram, on fishing net exported from Bangladesh to its domestic market.

Indian businesses alleged that Bangladesh was exporting those goods there at much lower prices than their production costs.

As a result, they said, the local industry was facing tough competition from Bangladesh's exporters and in some cases, losing market.

However, Bangladeshi exporters denied the allegation. Since then, they were requesting India to lift the duty which was adversely affecting exports to the neighbouring country.

At the commerce secretary level meeting, the Indian side reiterated that anti-dumping investigations were carried out by its Directorate General of Trade Remedies (DGTR) through quasi-judicial proceedings.

Therefore, there was little scope for government intervention in the process, they said.

However, they said a review would be carried out as per law if Bangladesh 'makes a formal appeal'.

The imposition of the anti-dumping duty dealt a heavy blow to exports of Bangladeshi goods to India.

Exports of these items declined significantly since India slapped the anti-dumping duty and the downtrend was continuing, according to officials.

A senior commerce ministry official told the FE that India was one of the major markets for Bangladeshi jute goods.

"As exports of jute goods to India faces setback, overall export of the item declined last fiscal year," he said.