Dhaka’s no to further cut in customs charges 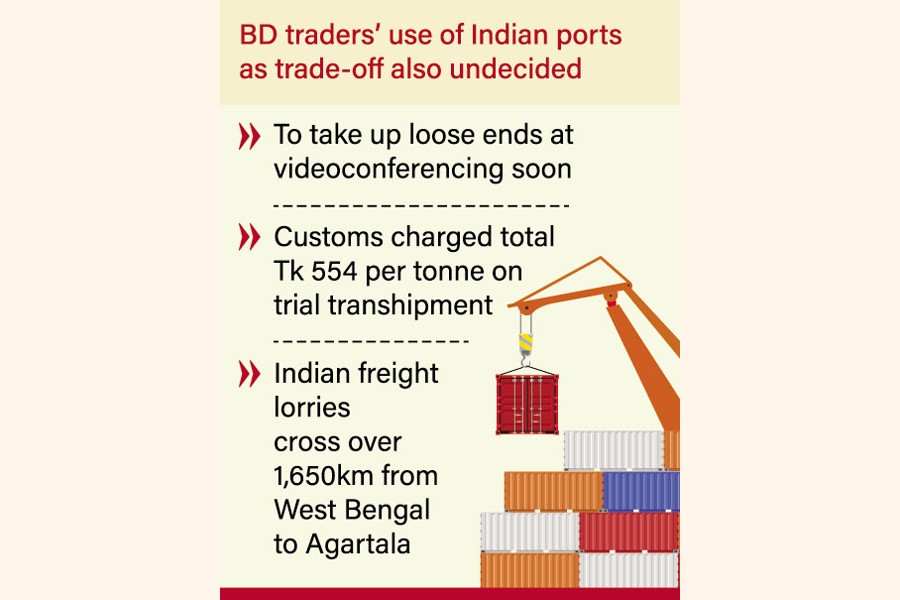 Bangladesh held back from agreeing to cut customs charges further for India's use of Chittagong and Mongla seaports as transhipment routes for transporting cargoes to its landlocked northeastern states, officials said.

At the same time, no decision is taken regarding amendment of two agreements allowing Bangladeshi traders to use India's ports for transporting cargoes to and from third countries, they added.

These are the two vital issues, among others, put on the negotiating table at the Indo-Bangla shipping secretary-level meeting held last week in New Delhi.

India used Chittagong port as a transhipment point on a trial run in July last year to carry four Indian containers to its states of Tripura and Assam.

In that trial run Bangladesh customs charged a total of Tk 554 per tonne, which include document-processing fee, transhipment fee, security charge, escort charge, other administrative fees, and scanning charge.

However, as India now wants to start regular transhipment of goods, the giant neighbour requested Bangladesh to lower the charges further, and the issue was discussed at the bilateral shipping secretary-level meeting last week.

Officials who attended the meeting told the FE that the two sides could not reach a consensus over the proposed rate cuts.

India wants to use Chittagong and Mongla ports to transport goods to its northeastern 'seven-sister' states of Arunachal Pradesh, Assam, Meghalaya, Manipur, Mizoram, Nagaland and Tripura.

Indian vehicles need to travel over 1,650 kilometres to carry goods from West Bengal to landlocked Agartala through Guwahati and the distance can go down significantly if it can use Chittagong and Mongla ports and Bangladesh territory. The freight transportation cost will also be cut down then.

For the Indian use of the two seaports of Bangladesh on the channels of the Bay of Bengal, Dhaka and Delhi signed a memorandum of understanding (MoU) back in 2015. Thereafter, the two neighbours also signed an agreement in 2018 to this effect.

Officials said India also raised the issue of Bangladeshi traders' use of its seaports for transportation of cargoes to and from third countries, as a trade-off.

An amendment to the Protocol on Inland Water Transit and Trade (PIWTT) and Bangladesh-India coastal shipping agreement will be needed to clear the decks.

"In the meeting no concrete decision on amendment of the two deals was taken," one official said.

Shipping Secretary Mohammad Mezbah Uddin Chowdhury, who led the Bangladesh delegation to the Delhi talks, told the FE Sunday the issue of lessening customs charges was discussed at the meeting but the negotiations could not be capped with a conclusion.

"We will further discuss the issue through videoconferencing," he said.

Mr Chowdhury further said the use of Indian ports by Bangladeshi traders was also discussed, but no concreted decision was taken on this score either.

Asked about the outcome of last week's meeting, he said the two sides had in-depth discussions but the points raised by them needed to be further examined.

"Both sides will take decision on the issues discussed through the videoconferencing in a week," he added.