Consumers crack under the weight of inflation 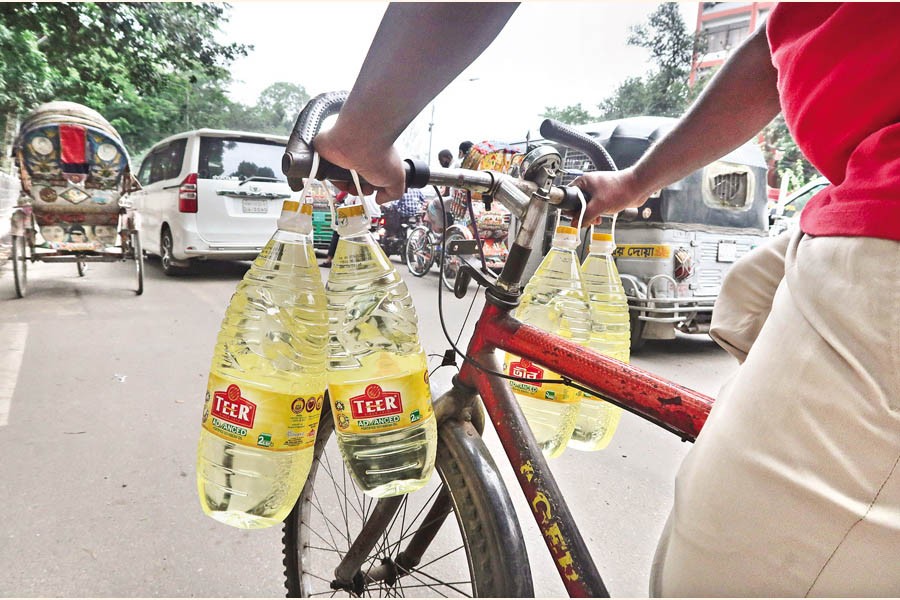 A man carries four bottles of soybean oil by his bicycle, as he makes his way home after buying the edible oil at a subsidised price from a sales point of TCB at Abdul Gani Road in the city on Tuesday — FE photo by Shafiqul Alam 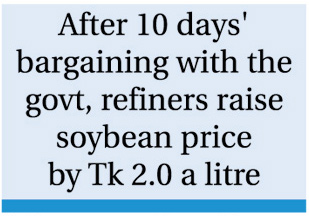 The prices of edible oils, including the bottled soybean, have witnessed a fresh hike just in a week, thus amplifying woes of low-income consumers.

The commoners' only respite is the open market sale (OMS) operated by the state-run Trading Corporation of Bangladesh (TCB), as their heightened crowding before such outlets says it all.

For a Tk 26-42 difference a litre than that of the mainstream oil market, hundreds thronged OMS trucks on Tuesday to buy the commodity at subsidised rates.

But many returned empty-handed amid limited allocation than consumer demand, the FE's visit to some OMS trucks in Dhaka city found.

Meanwhile, after 10 days' bargaining with the government, refiners finally raised soybean price by Tk 2.0 a litre against their earlier review of Tk 5.0.

The new MRP (maximum retail price) for a one-litre oil jar has been fixed at Tk 141 which was fixed at Tk 139 by the government on March 15.

However, the refiners earlier decided to supply the same at Tk 144 a litre from April 25.

The Bangladesh Vegetable Oil Refiners and Vanaspati Manufacturers Association (BVORVMA) proposed to the Bangladesh Trade and Tariff Commission on April 19 to raise the price to Tk 150 a litre following an upward price movement globally.

But following commerce ministry's request and considering the fasting month of Ramadan, they further reviewed it on May 03 and fixed the latest price rate, according to a BVORVMA statement.

The five-litre soybean jar price has been set at the maximum of Tk 670 and loose soybean price at Tk 119 a litre.

"But prices of both bottled and loose soybean oil increased in the market with the refiners' declaration to do so," said West Dhanmondi grocer Belal Hossain.

"Neither bottles with Tk 144 price tag nor jars with Tk 141 a litre has practically come to groceries. We're still selling old products with Tk 139 a litre MRP."

According to Mr Hossain, some grocers have been selling such old bottles at Tk 140-142 for the last one week.

He said new bottles might be supplied in a day or two.

"But loose soybean and palm oil prices witnessed further hike by Tk 4.0-5.0 a litre during the period," said Harunur Rashid, a grocer at Rayerbazar.

Meanwhile, the TCB has been selling soybean oil at the subsidised rate of Tk 100 per litre against a market price of Tk 126-142 a litre. Even the price is Tk 10-20 less than that of palm oil which caused a surge in crowd before TCB trucks.

Md Humayun Kabir, spokesperson for the TCB, said 520 trucks are selling six essential items across the country with 120 operating within the capital. Soybean oil allocation has been increased to 1,400 litres per truck while per person is allowed to buy maximum five litres, he told the FE.

The TCB is also selling sugar, lentil, onion, chickpea and date for each OMS truck at subsidised rates.

The FE found Many customers returned empty-handed from trucks amid limited allocation than demand.

Md Didarul, a worker of a roadside tea stall, queued up before an OMS truck at Khilgaon in Dhaka at 11:00 am.

He said, "I failed to buy oil as the stock ended long before I could reach the salesperson."

More than 95 per cent of the local demand for edible oils is met through imports.