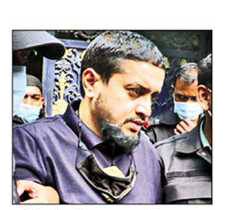 The elite police unit apprehended him from his Merul Badda home on Friday during an overnight raid led by RAB-3 Executive Magistrate Palash Kumar Basu.

The RAB team seized a large cache of gold and ornaments made of the precious metal, Tk 19 million in cash, liquor, a pistol and a few rounds of ammunition, she said.

Aside from the firearm and alcohol, the law-enforcement agency has confiscated the foreign currencies of 10 countries worth Tk 900,000, for which he also faces charges.

The RAB is preparing to start cases against Monir with the Badda police station under the arms, drugs and Special Powers Act.

Five vehicles were found on the businessman's property, three of which were confiscated as they did not have valid documents, RAB officials said.

Monir possesses assets worth more than an estimated Tk 10.5 billion, according to the authorities. He owns more than 200 plots in Badda, Niketan, Keraniganj, Uttara and Nikunja.

He is also implicated in a graft and land-grabbing case, the charges in which include forging RAJUK's seal.

Monir is a donor to a political party, the RAB said.