Govt extends general holidays until May 30 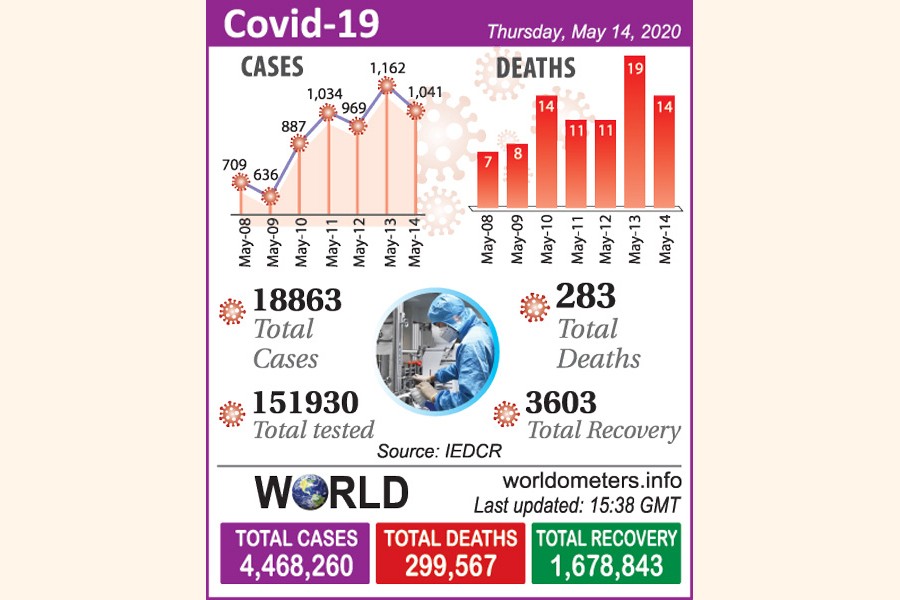 The government has once again extended the ongoing shutdown of public and private offices up to May 30, as COVID-19 situation across the country is showing no sign of improvement, officials and physicians said.

Rather, the numbers of confirmed cases and deaths kept rising alarmingly in the last several days, forcing the government to go for sixth spell of holiday extension, according to them.

The government issued a gazette notification on Thursday, stating that the extended shutdown covers weekends and holidays of the Eid-ul-Fitr.

The government's latest decision on shutdown extension came on the day when the country recorded 1,041 fresh infections and 14 more deaths in the last 24 hours ending on Thursday morning.

Additional director general (administration) of the DGHS Prof Dr Nasima Sultana on Thursday's online news bulletin said a total of 7,392 samples were tested in 41 labs across the country since Wednesday morning.

Of the tests, some 1,041 samples were found COVID-19 positive along with 14 more deaths recorded across the country in the last 24 hours, she said.

"With the latest numbers, the overall tally of confirmed cases and deaths rose to 18,863 and 283 respectively."

Nine of the deceased were from Dhaka, and the remaining victims were from Chattogram, the DGHS official also revealed.

At the same time, 242 more people recovered from the deadly virus infection. With these, the recovery rate has climbed further (19.1o per cent), and the total tally of recovered persons reached 3,603.

In the past 24 hours, a total of 201 people have been put in isolation, and with them a total of 2,570 people are now under isolation, Dr Sultana further said.

Besides, 36,422 people are currently in home and institutional quarantines, she added.

Director of management information system (MIS) of the DGHS Dr Md Habibur Rahman said the number of infections, recovery and death were 3,792, 65 and 35 respectively in the 8th week (from April 26 to May 02) of the pandemic in Bangladesh.

"In the last five days until Thursday morning, the number increased to 5,093, 1,189 and 69. So, things are deteriorating very fast here. That's why the government has extended the shutdown again, and it's the right decision," he added.

He said the government earlier reopened clothing factories, and it is probably impacting the country's pandemic situation now after 14 days (of the reopening).

"Reopening of shops and shopping malls will start affecting us after May 20. I fear further deterioration of the situation from next week," he added.

Globally, around 4.5 million people have been infected by the novel coronavirus, and 298,740 of them have died until Thursday 6:00 pm, according to Worldometer info.

Meanwhile, restriction on movement of public transports in the country has also been extended until May 30 in line with the government's decision to continue the lockdown for checking coronavirus pandemic.

Like the previous spells, all emergency services and goods-carrying vehicles will remain out of purview of the shutdown.

It also alerted people not to use these vehicles for carrying passengers during the shutdown.

With this fresh spell, the transport movement restriction has been extended for fifth time since March 26.