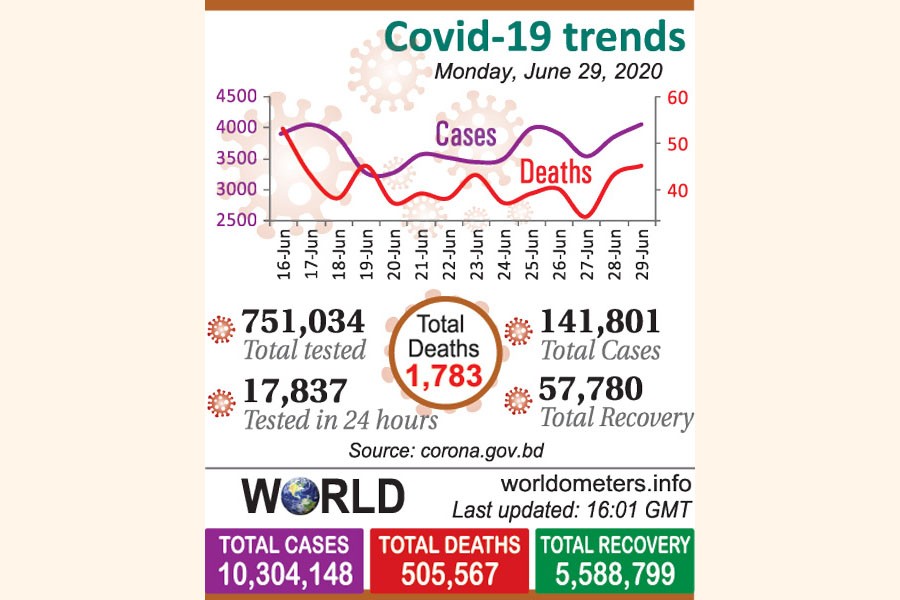 The government finally imposed charges on Covid-19 tests on Monday when the country saw yet another deadliest day as far as infections and fatalities are concerned, officials and physicians said.

According to a circular issued by the health service division under the Ministry of Health and Family Welfare, an amount of Tk 500 has to be paid for taking a Covid-19 test from home, while the fee will be Tk 200 if a sample is given to a dedicated test booth or government hospital.

In the last 24 hours ending on Monday morning, the densely-populated nation reported 4,014 new cases and 45 deaths across the country, official data showed.

This is the highest number of confirmed cases that the country reported a day. The previous high was 4008 recorded on June 17 last.

In terms of death, Monday's death toll was the third highest, according to state-run Directorate General of Health Services (DGHS).

With the latest statistics, the overall number of infections and death toll related to the respiratory disease caused by the corona virus rose to 141801 and 1783, the DGHS sources said.

In Monday's health bulletin on novel coronavirus, additional director general (administration) of the DGHS Prof Dr Nasima Sultana said that a total of 17,837 samples had been tested in 68 labs across the country since Sunday morning.

With the tests, a total of 748,034 samples have so far been tested across the country.

Of the new tests, some 4014 samples were found Covid-19 positive along with 45 more deaths recorded across the country during the period, she said.

"With these numbers, the overall tally of confirmed cases and deaths rose to 130474 and 1661 respectively," she said.

The rate of infections now reached 18.96 per cent while the ratio of fatalities rose to 1.26 per cent, according to her.

Twenty-two of the latest deaths were recorded in Dhaka division followed by ten in Chattogram, five in Khulna, three each in Barishal and Sylhet and one each in Rajshahi and Mymensingh divisions, Dr Sultana said.

The DGHS sources said 64,959 people now remain in both home and institutional quarantine while 14,942 others in isolation.

Simultaneously, some 2053 patients recovered from the infections in the last 24 hours, taking the tally of recovery to 57,780, according to the source.

There are 14690 general and 374 ICU beds available across the country for corona patients. Now, 4881 and 213 of those are being used for treating the patients, it said.

Globally, over 10.2 million people have been infected by the novel coronavirus and 505,071 died until 6:30 pm Monday, according to Worldometer info on coronavirus.