Govt sticks to its decision to keep factories open 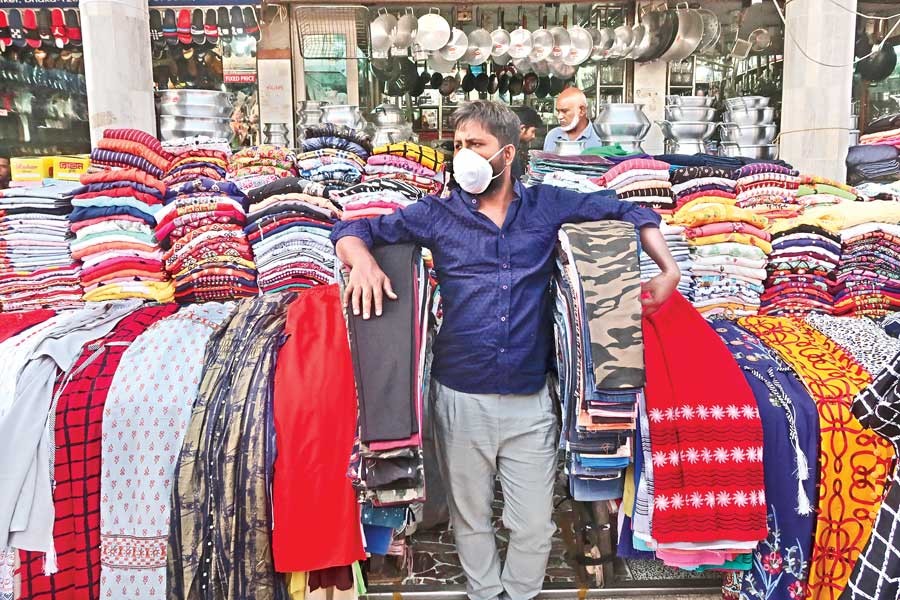 With no customers around amid coronavirus pandemic, a vendor bides his time at his pavement shop inside the New Market in the city on Sunday — FE photo by Shafiqul Alam

The government on Sunday reiterated its decision to keep the factories in the country open amid the coronavirus pandemic.

The decision was announced again after separate meetings with labour leaders, said a statement issued by the labour and employment ministry.

The government is putting emphasis on workers' awareness citing safety as priority, the statement said, adding that the changing situation would be taken into account later.

The government on Saturday asked factory owners to keep the production in the factories running after a tripartite meeting with apparel sector and other trade bodies' leaders and union leaders.

Shramik Karmachari Oikya Parishad, a platform of 11 labour rights bodies, on Sunday demanded ensuring proper safety and protective measures in all the industrial units including readymade garment (RMG) and the areas they dwell across the country to protect workers from the possible Covid-19 infections.

They also demanded rationing facility of daily essentials including medicines for the workers and arrange industrial zone-based institutional quarantine facility, if needed.

Besides, they pressed for keeping the operation in the factories running and requested the government to ensure monthly wages for the workers if the factories are closed.

The SKOP leaders made the demands at an emergency meeting with state minister for labour Monnujan Sufian held at Sromo Bhaban in the city on Sunday.

"Personal protective equipment must be ensured for all factories in both formal and informal sectors," Razekuzzaman Ratan, a SKOP leader, told the FE after the meeting.

If any worker is affected with coronavirus, industrial zone-based institutional quarantine must be ensured and workers should be made aware of the treatment process, he said, adding that factory owners and the government jointly should ensure all required treatment and other necessity during the quarantine period.

Safety and cleanliness must be ensured in the places workers are living, he said, adding that only safety inside the factories could not prevent the spread of the virus.

Wazedul Islam, another leader, said in recent days, prices of essentials went up significantly and the government should introduce rationing for workers.

Both the SKOP leaders said they did not want closure of any factory now including garment saying that closure would create more panic and coronavirus would spread as workers would be moving across the country.

They said if the situation deteriorates and it becomes necessary to shut factories, closure must be announced with full monthly payment of workers.

The SKOP leaders demanded an emergency fund worth Tk 50 billion for workers and formation of a task force comprising workers, owners, government officials and experts to decide what to do amid the ongoing coronavirus pandemic.

Later, the minister held a meeting with more than 70 trade unions engaged in the country's RMG sector.

A few of the leaders demanded immediate closure of garment factories while others pressed for keeping the units open, Sirajul Islam Rony, a labour leader, said after the meeting.

Garment Sramik Odhikar Andolan, a platform of 10 trade unions of RMG sector, made a five-point demand.

Workers of all garment factories have to be given leave for at least 14 days with full monthly payment and transportation allowance, Taslima Akhter, a leader of the platform, said after the meeting.

No workers would be terminated and during the leave period and in case of prolonging the factory closure, she said, the government and factory owners have to ensure regular wage payment.

Citing the data on work order cancellation and suspension, they urged the government to provide financial support including incentives, and low interest rate bank loan for factories to overcome the crisis.

According to BGMEA, some 347 garment factories have faced work orders cancellation and suspension worth $ 927 million until March 22.