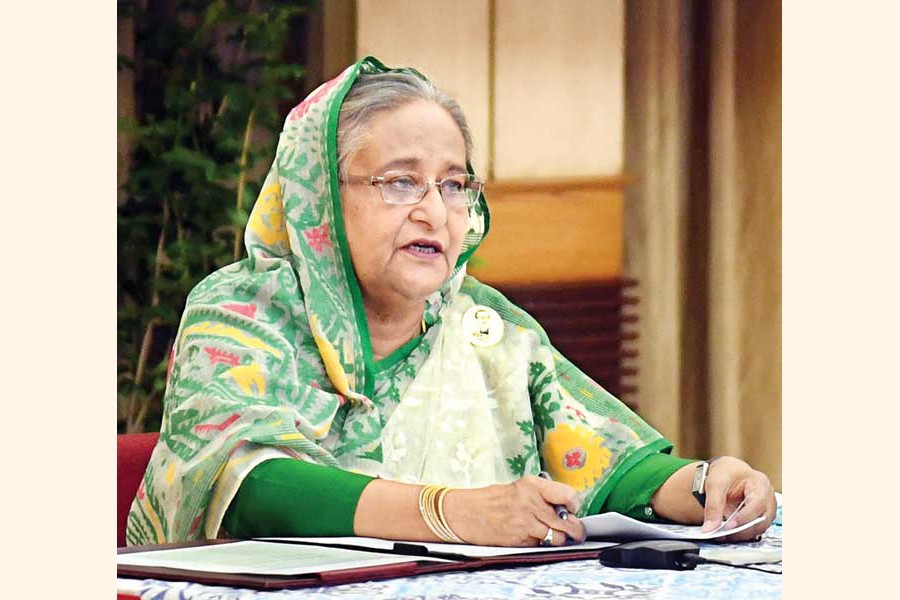 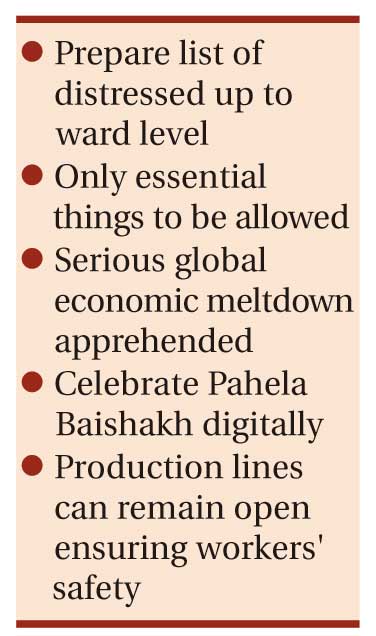 The premier said this while exchanging views on the country's coronavirus situation with the public representatives and field level government officials through a video conference from her official Ganabhaban residence.

When the cabinet secretary drew the Prime Minister's attention about the extension of holidays till April 9, Sheikh Hasina said it can be extended till April 9, but it will not be a complete shutdown.

"It can be done on a limited scale, and a scope will have to be created for movement of some people," she said.

The government will review the situation after completion of the 14-day (quarantine period), she said.

Sheikh Hasina added: "Everything can't be stopped. The essential things will remain in operation. But all the educational institutions such as schools and colleges will remain closed till April 9."

The prime minister has directed all to celebrate the Pahela Baishakh, the first day of the Bengali New Year, digitally without creating any mass gathering, in response to the government's "stay-at-home" guideline.

"You can celebrate the Pahela Baishakh digitally as much as you want. But, the celebration by creating mass gatherings must be stopped (as mass gatherings have been prohibited considering the coronavirus situation)," she added.

The Prime Minister apprehended that due to the COVID-19 attack there might be a serious economic meltdown.

The premier said the world is going to witness an economic recession and its impact may fall on Bangladesh too.

"Hence, from now on we'll have to take measures to face this impact," she said.

About the continuation of production in mills and factories during this period, Sheikh Hasina said their production could be kept up through discussion and maintaining the health safety of the workers and employees.

While exchanging views with public representatives and officials of the Sylhet district, the Prime Minister said the tea workers could continue their work by maintaining (social) distance among themselves.

The Prime Minister asked all concerned to ensure the supply of essentials to keep the prices under control.

"We've to maintain our food production and we've to look after that. Please don't leave single inch of land fallow and single wetland without farming fish," she said.

She also said the government would provide all essential assistance.

During the time, the Prime Minister asked the Agricultural Minister to ensure all kinds of agriculture materials including seeds, fertilisers and other essentials for the farmers.

The Prime Minister asked all concerned, including public representatives and officials of the administration, police and health department, to work in a coordinated manner to protect the people from coronavirus.

The Prime Minister said the government took its steps to prevent spread of Covid-19 from the very beginning and for that reason there had not been many cases in the country.

"We've to look after the matter so that this COVID-19 could not break out in the country in future. We've to continue this (holidays) and take the sufferings for some more days," she said.

"We're taking this decision for the welfare of all," she said.

She, however, said that offices would remain open in a limited way. "I'll look into what we can do regarding this. We'll take steps so that the ways of income of the people remain open," she said.

"We've to maintain the supply side so that the prices of essentials remain stable and keep within the commoners reach. We've to ensure that," she said.

She said the government is televising class lecturer through Sangsad Television for the sake of students.

Regarding the PPE, the Prime Minister said only the doctors and other related people who are serving the COVID-19 infected patients will use PPE.

"There's no need to wear PPE for others," she said.

The Prime Minister again asked the officials concerned to prepare a separate list of distressed people up to ward level who are in a very bad situation due to the government-declared holidays and usually do not get any government assistance from the social safety net programmes.

In this connection, she mentioned the jobless working class people like day-labourers, rickshaw and van pullers, and disabled people to ensure their livelihood at this crisis moment.

"But let me tell you one thing, there must not be any type of corruption and irregularities in this programme," she said.

She asked the concerned officials to ensure that all distressed people get the government assistance.