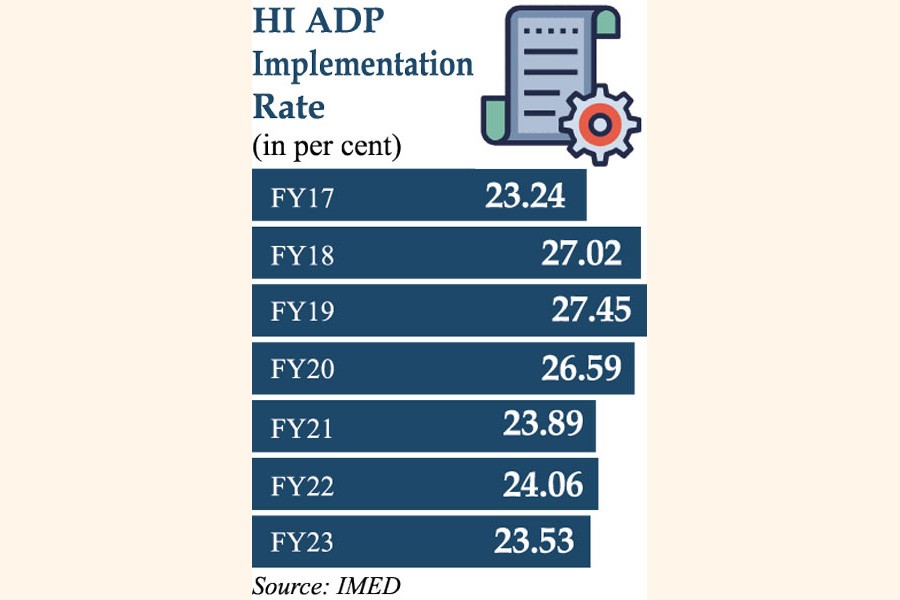 Implementation of the Annual Development Programme (ADP) in the first half (H1) of the current fiscal year (FY) stood at 23.53 per cent, the lowest in the last six years, officials said on Wednesday.

Officials at the Implementation Monitoring and Evaluation Division (IMED) said the government ministries and agencies could not improve their capacities even during the recovery process from the Covid-19 pandemic when the projects suffered serious setbacks.

"It is very unfortunate that the public entities have been failing to improve their capacities even after repeated reminders to expedite the development work," said a senior IMED official.

According to the IMED, the government agencies spent Tk 603.13 billion, 23.53 per cent of the total Tk2.56 trillion allocations for some 1500 development projects, during the July-December period of the current FY.

When asked, IMED Secretary Abul Kashem Md. Mohiuddin told the FE that they had given some special guidelines to the ministries for improving their project implementation capacities.

He said the Prime Minister as well as the ECNEC meetings also instructed expediting the execution by avoiding inflated cost and time overrun.

"You would see some outcome within the next 2-3 months of our steps already shared with the projected implementing ministries and agencies," Mr Mohiuddin said.

He added that the IMED is now discouraging the project implementing agencies and ministries to extend the project tenures and costs amid the impact of the global economic crisis on the national economy.