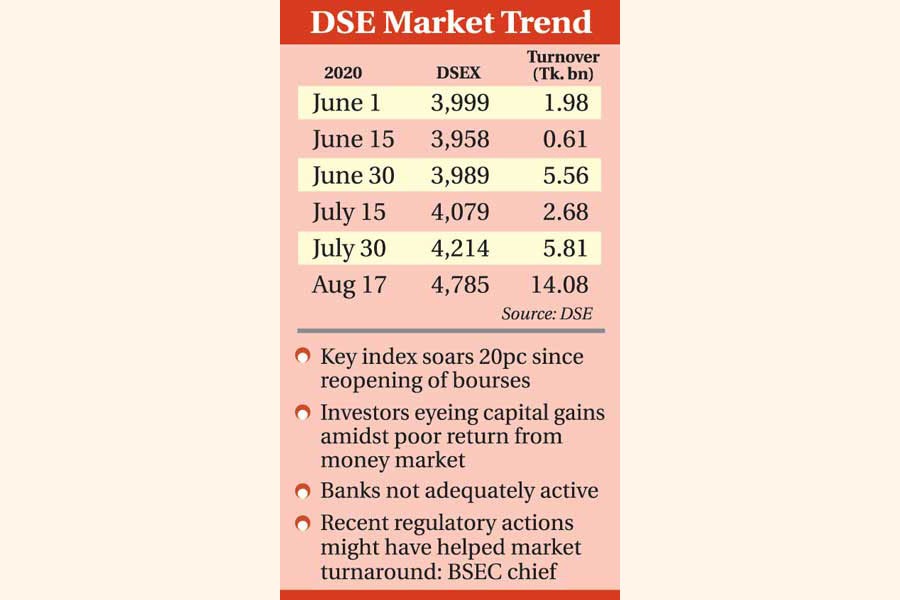 Active participation of high net worth individuals has given boost to the capital market in recent days, according to market insiders and experts.

Other factors such as lower returns on the money market, lucrative price level of listed securities and strong regulatory actions against wrongdoers also helped buoy the market.

DSEX, the broad index of Dhaka Stock Exchange (DSE), surged 800 points or 20 per cent since the market reopened on May 31, 2020, to settle at 4,859 on Sunday. The country was in a 66-day shutdown aimed at slowing the spread of new coronavirus.

The index level has been the highest since October 9, 2019.

The DSE's turnover, which went down below Tk 3.0 billion, 15 sessions ago, also crossed Tk 11 billion on August 9 and crossed the Tk 14 billion on Monday.

"The nature of money is that it will be pumped into a channel, which ensures investment safety along with providing better returns compared to other investment tools," said Sharif Anowar Hossain, president of the DSE Brokers Association.

Talking to the FE, different market operators said investors are injecting fresh funds into the market targeting capital gains as returns from the money market have declined.

Former chairman of the securities regulator Faruq Ahmad Siddiqi said it may be difficult for the market to continue its ongoing trend in the long run if investors become market-oriented for capital gains only.

He also laid importance on bringing disciplines in the primary market for the sake of secondary market. The latest monetary policy statement also highlighted the issue.

Dividend yield of some 26 companies, which normally attract long-term investment, has ranged from 2.0 per cent to 8.3 per cent for the last 12 months, in terms of cash dividend.

Before the recent rally, the DSEX tumbled to a seven-year low to 3,603 points on March 18 as investors turned jittery, amid rising fear of the deadly pathogen.

The market now has rebounded and continued its upward trend without much institutional and foreign portfolio investments.

Only 15 banks have invested Tk 2.54 billion against the Tk 20 billion funds set up to breathe new life into the market in line with the central bank order.

Under such a situation, the stock market has continued its upward trend mainly riding on general investors, including high net worth individuals. Preferring anonymity, chief executive officer (CEO) of a leading brokerage firm, owned by a large business group, said money is coming rapidly from their all types of clients, including the ultra-rich.

"Now, we need not insist our clients on depositing money. They are depositing funds ranging from Tk 0.50 million to Tk 50 million to ensure their position in listed securities," said the CEO. He said apart from high net worth individuals, different companies and their subsidiaries having liquid funds are also taking position in the market targeting capital gains as returns on the money market fell.

After the reopening of bourses, the return of benchmark stood at 16.44 per cent between May 31 and August 16 on the DSE. The broad index return was 9.11 per cent for the period of January 1 to August 16 on the premier exchange.

The return of broad index is considered market return because it is calculated taking into account free-floating shares alone.

On the other hand, call money rates are below 5.0 per cent. As a result, the recent return from the capital market was higher than that of the money market.

An official of the securities regulator, who looks after daily transactions on bourses, said the increased transactions between June 17 and August 16 indicate that the market turnover was mainly driven by individual investors.

He said the market turnover makes a jump, despite lower participation of general investors.

"The trade that has increased gradually proves the turnover value of over Tk 10 billion could not be achieved without the participation by individual investors," the BSEC official said.

Even the shares of 'Z' category companies are also seeing price hikes.

Following the price hike in listed securities, the market capitalisation on the DSE soared by 15 per cent to Tk 3,635 billion on Sunday.

Chief executive officer of VIPB Asset Management Shahidul Islam said around 90 per cent of their fund was invested in the secondary market before the outbreak of COVID-19.

"Our portfolio investment rose very marginally amid the recent upward trend. So, I think the continuous upward trend has been driven mainly by high net worth individuals," Mr. Islam said.

He said the securities regulator is working on bringing disciplines in the market and investors will judge the regulatory measures.

"I cannot think of non-compliance with the BSEC's order by a brokerage firm or merchant bank. We are working towards ensuring investment safety," the BSEC chief said.

The incumbent commission led by Prof. Islam has taken many actions against the wrongdoers to ensure the accountability of the stakeholders. As part of the efforts, the commission recently has imposed an aggregate amount of penalty worth Tk 420 million on firms for irregularities.

The BSEC has also taken an initiative to restructure the boards of 'Z' category companies to reactivate their operations complying with the securities rules.