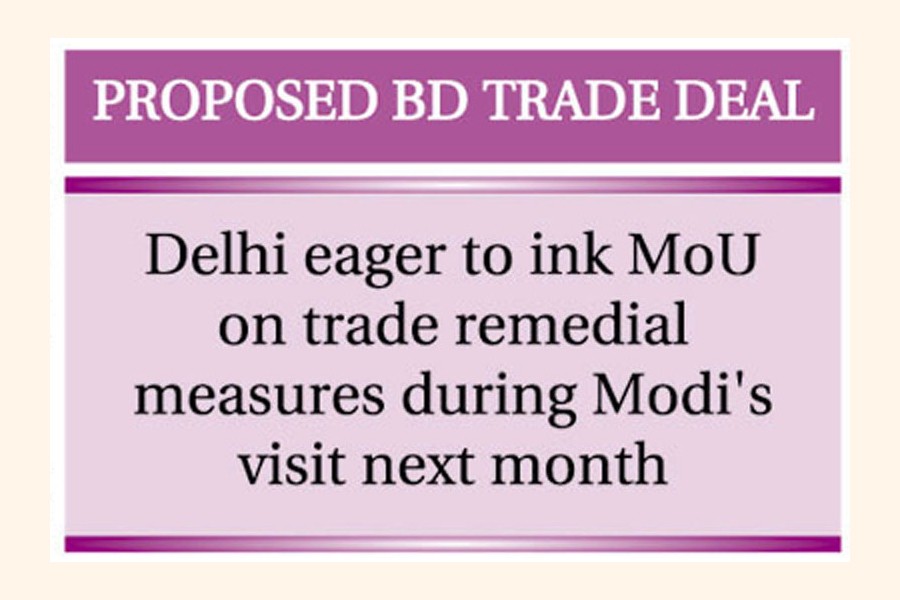 India has again opposed inclusion of the issue of anti-dumping (AD) in a bilateral trade agreement that it has proposed to strike with Bangladesh, officials have said.

The neighbouring country, they added, did not also agree to an alternative proposal by Bangladesh for inclusion of a provision like 'pre-initiation consultation' on anti-dumping issue in the proposed deal.

India declined to keep any anti-dumping provision in the first draft of the agreement--- memorandum of understanding (MoU) on bilateral trade remedial measures--- arguing that it was a quasi-judicial matter.

Latter, officials said, Bangladesh had proposed to include a provision that any party of the MoU should hold consultation first with the other before initiating any anti-dumping measures.

In a letter to the commerce ministry of Bangladesh last week, the Indian High Commission in Dhaka expressed India's interest in signing the deal sans any provision for 'pre-initiation consultation' during Prime Minister Narendra Modi's Bangladesh visit in late next next.

The MoU aims to establish a framework of cooperation in the area of trade remedial measures and the two sides have already exchanged drafts in this regard.

According to trade officials, India always brands the anti-dumping issue as a quasi-judicial matter and has expressed its unwillingness to discuss the issue. Thus, several anti-dumping cases on Bangladesh's export to India remained unresolved for years, they added.

A senior commerce ministry official said that if a provision for 'pre-initiation consultation' can be kept in the MoU, both sides will have to consult first before initiating anti-dumping cases in future.

"If the MoU includes the provision, filing of anti-dumping cases can be avoided through quick consultation," he said.

Officials said the ministry of commerce sought opinion from the Bangladesh Trade and Tariff Commission on the Indian draft and their reservation against the 'pre-initiation consultation'. The commission, meanwhile, recommended trying further to include the provision, they added.

Alongside the tariff, para-tariff and non-tariff barriers, they said, Indian antidumping and countervailing measures were other major concerns for the Bangladeshi traders.

Presently, Bangladesh is holding negotiation with India on the countervailing duties they imposed on several goods, and the negotiations were taking place under the WTO (World Trade Organization) Rules.

The negotiation on countervailing measures under a bilateral pact might produce quicker results than that of the multilateral platforms, they opined.

"Signing a trade dispute remedial deal with India, excluding the issue of countervailing measures, would not be that much beneficial for Bangladesh," noted a trade official. Presently, Indian anti-dumping duty is applicable to export of at least three Bangladeshi items - jute goods, hydrogen peroxide and fishing net.

In January 2017, India imposed anti-dumping duty on Bangladesh's jute yarn, hessian and bags ranging between US$19 and $352 per tonne. A similar duty, ranging between $27.81 and $91.47 per tonne, was also imposed on export of hydrogen peroxide to India from Bangladesh in April 2017.

In 2018, India slapped anti-dumping duty, $2.69 per kilogramme, on fishing net exported from Bangladesh to its market.

Despite scores of consultations for years, India did not however withdraw these trade barriers, badly affecting Bangladesh's export there, said the officials.

He said that as a poor nation, Bangladesh should continue applying its LDC status. "Being a graduated LDC, perhaps after 2024, Bangladesh would continue enjoying the similar flexibility for a specific time period."

"In this context, Bangladesh should not rush for signing such an agreement with India at this stage, and rather it should wait to see how the WTO provisions will be applicable after the graduation."

At present, India is dealing with disputes related to subsidies and countervailing measures under the WTO rules, and Bangladesh should follow the same, he suggested.