Khaleda released after 25 months behind bars 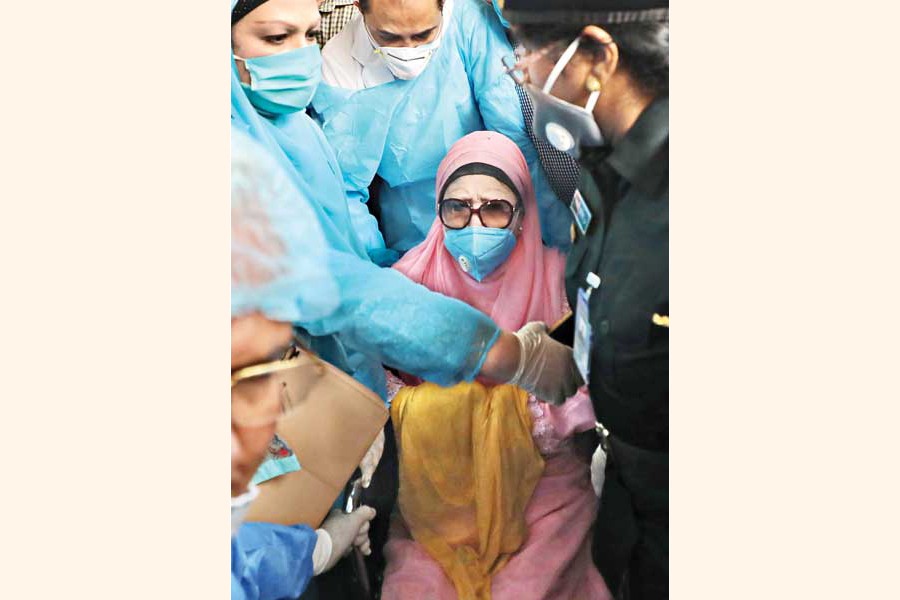 BNP chief Khaleda Zia was released from jail after 25 months behind bars amid the government's precautionary measures to fight the coronavirus outbreak, reports bdnews24.com.

The home ministry had earlier sent an order for Khaleda's release to the prison authorities, after Prime Minister Sheikh Hasina's approval.

Khaleda was released from the BSMMU, where she was receiving treatment, on Wednesday afternoon. A huge crowd gathered there to get a glimpse of Khaleda, raising coronavirus risks at a time when Bangladesh and the rest of the world are practising social distancing.

The document was sent to the jail authorities at 2:10pm.

The BNP chief's personal security force with five cars and a microbus were seen at the hospital premises while her Nissan Patrol SUV was already waiting to pick her up and take her to her Gulshan home 'Feroza'.

Several senior party leaders, including BNP Secretary General Mirza Fakhrul Islam, and some of her family members were seen waiting at the hospital there for her release. After the formalities of her release ended at the cabin block, a new wheelchair was taken to the sixth floor room no. 621.

Khaleda, who is ailing, had been receiving treatment in prison. Expressing concerns over Khaleda's health amid 'risks of coronavirus infection', BNP lawyers demanded her release the day before.

Khaleda has been in prison since February 2018 after she was sentenced to a total of 17 years in two graft cases involving Zia Orphanage Trust and Zia Charitable Trust.

An FE Report adds: After the release at around 4:20pm, Khaleda Zia was taken to her Gulshan-2 residence by the family members.

The situation became chaotic when BNP supporters crowded the hospital. The BNP secretary-general was then seen requesting the supporters to clear out the hospital premises.

However, to disperse the crowd, at one point, police had to charge baton on BNP men to clear the way for the BNP chairperson.

She then left the hospital premises, escorted by her personal security force, and flanked by party people and family members.

Talking to the media about the release of Khaleda, Fakhrul said, "It's a great relief that we are taking her home. Hope she will get well soon mentally in home environment."

"Her (Khaleda) treatment will continue at the residence for now while the party leaders have been in touch with her family members for next course of action," he said.