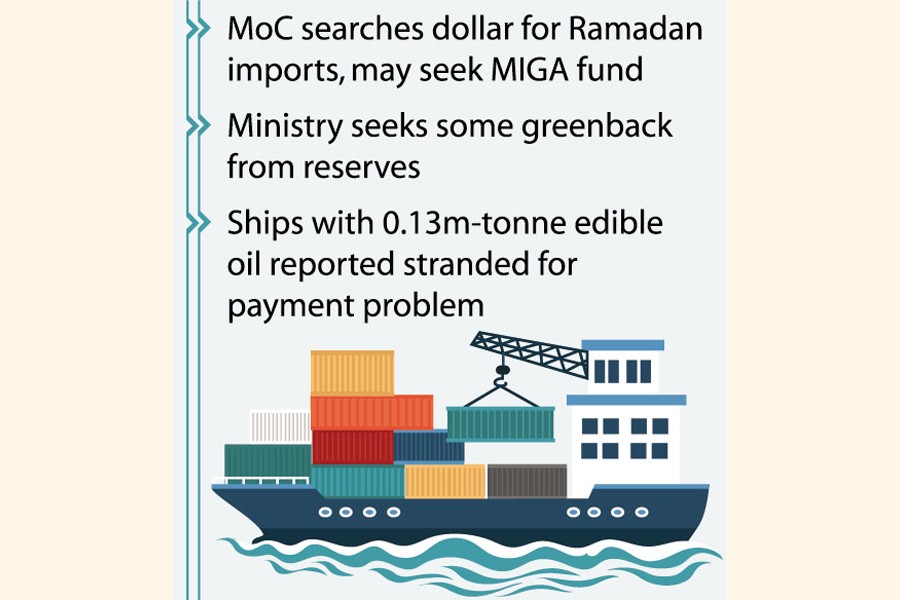 The BB governor made the assurance in a meeting with visiting Board of Directors of Dhaka Chamber of Commerce and Industry (DCCI) at the BB headquarters, a DCCI press release stated.

Mr. Talukder said the country currently faces three major challenges and he named them as the ongoing Russia-Ukraine war, interest-rate hike by the US Federal Reserve and recent Covid situation in China.

"Despite these challenges, the economy is quite stable. The current situation of LC may ease within the next couple of months," he said.

The governor reaffirmed that the BB has been relentlessly working through relevant policy measures and actions like lowering the LC margin to ensure seamless supply of essential commodities to the market during the Ramadan consumption binge.

Considering the importance of remittance inflow, he mentioned that recently there had been some changes in the process of sending remittance, including the waiver of relaxation of required documents and fees by the local banks and engaging Mobile Financial Services (MFS) to bring remittance home.

As a result, he expects that the remittance inflow will increase considerably in future.

Remittance is a major source of recharging the country's foreign-exchange reserves, now under stress, after export income.

He also called upon the Bangladesh Bank to assist the commercial banks with adequate foreign-exchange supply to settle the LCs to ensure continuous supply of essential commodities during the upcoming month of Ramadan.

The DCCI President thanked Bangladesh Bank for unveiling a timely Monetary Policy Statement (MPS) that would help both private and financial sector to turn around as the MPS includes some "instrumental policies and guidance".

He also hailed the initiative of continuing the re-financing scheme of Tk 500 billion for agriculture, CMSMEs and import-substituting industries.

The DCCI chief further emphasized necessary reforms, like easing the documentary requirements for CMSMEs to access finance and, especially, in relation to Credit Guaranty Scheme for the better interest of the CMSME community. Besides, he urged easing the documentation process for young and innovative startups so that they can avail loans easily.

He also underscored the need for enhancement of the private-sector credit growth to accelerate the contribution of private sector in the economic resurgence, in this given geo-economic context.

He suggested ensuring good governance to contain the soaring non-performing loans (NPL) by taking stern measures for quick loan recovery focusing on habitual defaulters as well as necessary reforms to regulations in the banking sector.

In a letter Sunday, in the meantime, the commerce ministry requested providing required US dollars from the foreign-exchange reserves so that the commercial banks, including state-owned ones, can make import payment.

Against the backdrop of dollar crunch, traders at a meeting early this month had urged the government to keep aside a certain amount of US dollar from the forex reserves to facilitate import of the commodities and ensure smooth supply.

Accordingly, the ministry requested the BB to look after the matter so that essential consumer supplies are not affected ahead of the month of fasting and religious festivals, as banks were still reluctant to open LCs.

When contacted, senior secretary of commerce Tapan Kanti Ghosh said: "The ministry has already requested the central bank to help prevent any supply disruption during Ramadan."

Talking to the FE, former secretary of Moulvibazar Wholesale Merchant Association Golam Mowla said imports were facing a setback for unavailability of dollar with the banks.

There has been short supply of some essentials, especially sugar, on the local market, he said, apprehending supply disruptions during Ramadan unless sufficient imports take place before then.

Meanwhile, the clearing of some imported goods from ships at Chittagong port was learned to have hit an impasse for want of dollars needed for payment of forex part of LC value.

According to media reports, ships loaded with 0.13 million tonnes of edible oil remained stranded for days as the importers could not make payments. As a result, they were counting a significant amount of charges.

Analysing government statistics, it comes clear that the demand for some essential items generally increases during Ramadan. Of these, the sugar demand increases substantially.

Traders concerned lamented that they could not even open LCs for importing edible oils, gram, lentils and dates due to the banks' reluctance.

Experts said to facilitate import of fuel oils and fertilisers, some support from the forex reserves had been given to four state-owned banks.

In an urgent meeting on essentials on January 18, with the senior secretary of commerce, Tapan Kanti Ghosh, in the chair, the BB representatives informed that a BB high-profile meeting did not approve a proposal in this regard and it asked the state-owned banks to ensure opening LCs for only government imports.

The commerce secretary expressed his dissatisfaction over the non-implementation of the taskforce-meeting decision. "It is unfortunate that necessary support is not provided to import the essential items," he said.

Under the circumstances, a fund managed by the Multilateral Investment Guarantee Agency (MIGA) is also under consideration for this purpose if the interest rate and other terms and conditions can be settled through negotiations.

Last week, Bangladesh sought the MIGA loan highest at 4.0 per cent interest rate, but the World Bank's cross-border investment platform asked for a rate of 6.0 per cent.

The senior officials of the MIGA offered US$500 million or $1.0 billion loan to Bangladesh at a rate between 5.0 per cent and 6.0 per cent for importing basic commodities like rice, wheat, lentils, sugar and edible oils.

Bangladesh avails loan from the international financial institutions at 2.0 per cent. Since it is a bad time, the interest rate may be the highest 4.0 per cent. But the MIGA seeks 6 per cent inclusive of commission.

The MIGA itself will not provide the loan, but would arrange the funds from the international financial institutions.