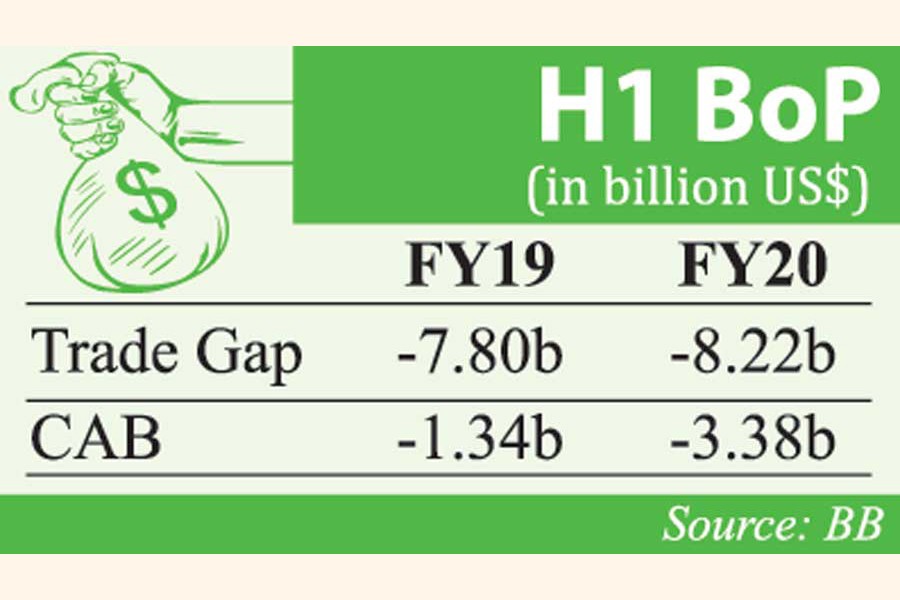 Although the country's merchandise trade gap widened, the deficit in current account balance declined significantly in the first half (H1) of the current fiscal year 2019-20.

The central bank statistics released on Tuesday showed that the trade gap recorded at $8.22 billion in the July-December period of the current fiscal year.

The trade gap registered a 5.38 per cent increase over the same period of the past fiscal year (FY'19) when it was $7.80 billion.

Workers' remittance jumped by 25 per cent during the period under review while export and import of goods declined by 5.90 per cent and 2.72 per cent respectively, according to the statistics released by Bangladesh Bank.

"Though the balance of payments is now at a comfortable level, it is at the expense of reduced exports and imports," said Dr Ahsan Mansur while talking to the FE on Tuesday evening. "We are now at a shrinking environment of trade."

The executive director of Policy Research Institute of Bangladesh (PRI) was of the view that there would be a pressure on the exchange rate as well as BoP when import would pick up."

A modest increase in inflow of foreign direct investment (FDI) and decline in medium and long-term loan contributed to keeping the financial account surplus at low level.

As a result, overall balance of payments registered $27 million surplus in July-December which was in a deficit of $513 million.

"Overall BoP in the first half of the current fiscal year is a reflection of weak economy," said the former economist of International Monetary Fund (IMF). "We are no more export-led economy. Export is not the engine of growth now which was even two years back."

Dr Mansur also warned that current high growth of remittance may not be sustainable as less people are going abroad now.