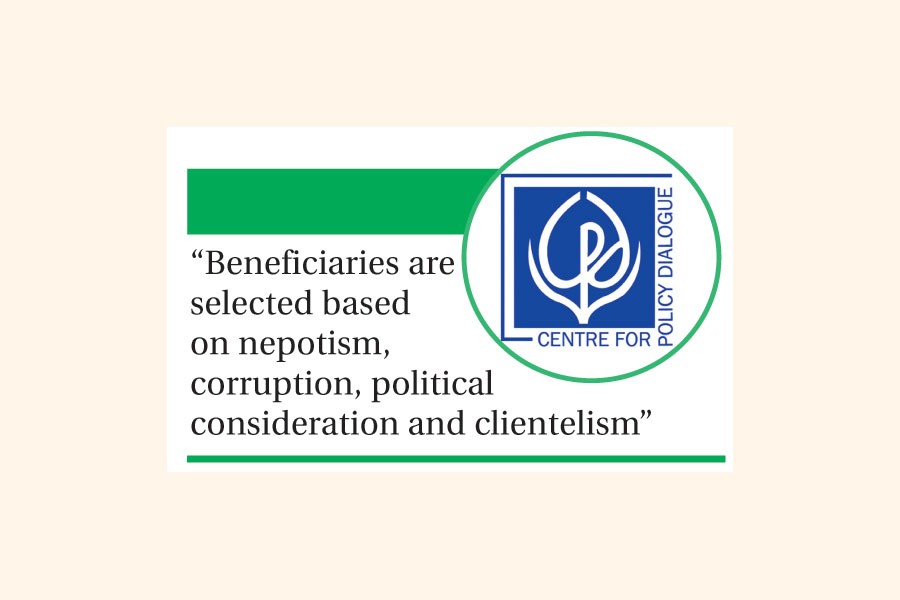 As many as 65 per cent of the fund from the government's social safety net programmes (SSNPs) goes to non-poor owing to nepotism, corruption, political consideration and clientelism in selecting beneficiaries, according to a CPD study released on Wednesday.

The study styled "Efficiency of Delivering Social Protection Programmes in the North-West Region" conducted by the Centre for Policy Dialogue (CPD) also revealed that the school secondary stipend programme is the most corrupt segment where 72 per cent beneficiaries were non-poor and only 28 per cent poor students.

"For example, according to the statements of a number of UP chairmen and members, and government officials during the field study, most of the targeting errors in case of maternity allowance and old age allowance occur in the form of cards being given away on political consideration," senior research fellow of CPD Towfiqul Islam Khan said in his keynote presentation in a virtual dialogue.

With the assistance of Citizen's Platform for SDGs, Bangladesh, CPD organised the dialogue in association with Oxfam in Bangladesh.

Mr. Khan said, "Social Safety Net Programmes in Bangladesh are able to cover only a proportion of the total poor population. Only 32.5 per cent poor households received some forms of assistance, while about 19.8 per cent among the non-poor were included in such programmes."

The survey was conducted based on the Household Income and Expenditure Survey (HIES) 2016 of Bangladesh Bureau of Statistics (BBS) in Nilphamari, Rangpur, Kurigram and Gaibandha districts.

These districts belong to the Rangpur Division, the poorest in Bangladesh in terms of poverty level. The survey also focused on the efficiency of the delivery of five core-lifecycle based social protection programmes.

These include maternity allowance, primary and secondary school stipend programs, employment generation programme for the poorest and old age allowance.

A total of 1,500 households (HHs) with at least one SSNP beneficiary were interviewed using a semi-structured questionnaire.

As per the survey findings, about 65.6 per cent among the interviewees from the households receiving SSNP assistance were from the non-poor category, while only 34.4 per cent of the assistance went to the actual poor.

For old age allowances, 32.2 per cent beneficiaries were poor, while 67.8 per cent were non-poor.

Among maternity allowances, 41.5 per cent of the beneficiaries were poor and 58.5 per cent were non-poor.

In case of employment generation for the ultra-poor, 49.6 per cent recipients were poor and 50.4 per cent were non-poor.

About 72 per cent secondary school stipend beneficiaries were non-poor students and only 28 per cent were poor students.

On the other hand, 63.8 per cent recipients of primary school stipend were non-poor and 36.2 per cent were poor.

Mr. Khan said that the number of beneficiaries are relatively high in those districts due to higher poverty rate.

Among the beneficiaries, 43.9 per cent non-poor people are enjoying social safety net privileges in Gaibandha, 30.4 per cent in Kurigram, 34.1 per cent Nilphamari and 21.6 per cent in Rangpur, he added.

More than half of the beneficiaries for employment generation programme for the ultra-poor are from non-poor families.

Representatives of local governments, beneficiaries of the social safety nets and officials from different NGOs attended the dialogue.

Speaking at the programme, Tajul Islam MP admitted that there are many anomalies in the government funded safety net programmes. The government wants to correct it and make a database for all types of programmes so that overlapping and anomalies cannot take place anymore.