The National Board of Revenue (NBR) is now examining the tax returns of the owners of 930 luxury cars to find out whether they have evaded tax payment on account of the vehicles.

The tax authority has collected information about all luxury vehicles that were registered between July 2012 and June 2018 with the Bangladesh Road Transport Authority (BRTA). According to the BRTA data, there are 930 registered luxury vehicles in the country.

The taxmen have found that some people have registered 10 to 20 luxury cars, especially BMWs, under a single electronic Taxpayers Identification Number (e-TIN).

Officials said most of the taxpayers, who own multiple cars, show just one car in their tax returns to avoid payment of additional tax.

According to the Income Tax Ordinance1984, owners of more than one car are required to pay 50 per cent higher tax for the second one.

Talking to the FE, NBR Commissioner (Income Tax) Md Asaduzzaman said most of the owners of those luxury cars have more than one car.

"In one case, we have found a total of 20 BMW cars have been registered under the single e-TIN of a businessman."

The Central Survey Zone (CSZ) under Income Tax Wing of NBR has collected data of all luxury car owners to crosscheck the information they furnished in their income tax returns, he added.

The CSZ has collected the details of luxury cars, including name, address and e-TIN numbers of their owners along with other relevant information from the BRTA.

Responding to the FE's query, BRTA Director Sitangshu Shekhar Biswas said the BRTA has provided data of the luxury cars that were registered with it.

He said there is no scope to hide information of a car's chassis capacity, as BRTA officials physically inspect it. Besides, advance tax for a car is collected by the bank on the basis of the engine capacity of the cars.

Of the 930 luxury cars, the number of BMWs is the highest. A total of 407 BMWs are now plying the country's roads, followed by Mercedes-Benz (197) and Audi (185). There are also 56 Jaguar and 38 Volvo brand vehicles in the country.

"The number of registered luxury cars, I guess, should be more than 1,000."

The definition of luxury cars needs to be explained to understand whether NBR refers to European cars or Japanese cars, he also said.

"As a seller, I have found luxury car owners tax compliant," he added.

In October last, the CSZ sought the registration information of cars of various brands, like - BMW, Volvo, Mercedes-Benz, Audi, Lexus, Jaguar, Hummer, Prado, Petrol Turbo Wagon, Discovery and Harrier etc, to detect whether owners of these vehicles evaded tax by hiding actual price and brand of cars in their income tax files.

According to the income tax rules, the owner of a car having the engine capacity of up to 1,500 cc has to pay Tk 15,000 a year as advance income tax during registration or renewal of fitness certificate of the vehicle.

Brand and number of luxury cars in Bangladesh: 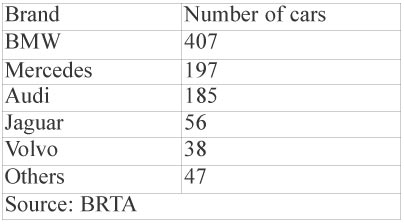