The collection of tax revenue registered a 16.72 per cent growth in the first quarter (Q1) of the current fiscal year (FY) as compared to the same period last FY, thanks to economic reopening after the Covid-induced lockdown.

Increased prices of imported commodities, particularly fuel oil and food items, in the global market have helped enhance the collection of duties and taxes by the customs wing, suggested an analysis of import data.

The average tax revenue collection growth was 11.36 per cent during the last five years.

However, the overall collection fell by Tk 63.43 billion short of the period's target, according to provisional data of the National Board of Revenue (NBR). 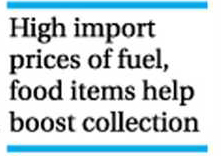 In the July-September quarter, the NBR collected Tk 583.51 billion in tax revenue against its target of Tk 646.95 billion.

Director General of the NBR research and statistics wing Md Anwar Hossain expected the revenue collection to increase further in the coming months and achieve the target, which is too high compared to that of the last FY's actual collection.

He informed that trading, retail and some other important sectors have contributed to the higher tax collection growth this time. "This is a provisional figure. The actual growth will be even more after final data compilation," he added.

Of the total Q1 collections, customs revenue posted an impressive 21 per cent growth, highest among the other wings, due to increase in global commodity prices.

Import of revenue-generating products including higher prices of fuel oil and food contributed to the higher customs revenue growth in the first three months of the current FY.

According to Bangladesh Bank data, the value of imports as measured by the settlements of letters of credit (LCs) surged by 30.62 per cent to US$ 5.17 billion in August 2021 from $3.96 billion in the previous month.

The opening of import LCs also increased by more than 48 per cent to $6.29 billion in August from $4.25 billion a month ago.

The VAT collection also grew by 16.45 per cent in the period under review as consumption of goods increased following resumption of economic activities and domestic tourism.

However, the income tax wing suffered a collection shortfall of Tk 19.78 billion, followed by VAT Tk 19.47 billion and customs wing Tk 24.17 billion as compared to their respective targets for the period.

The government has increased source tax in some key points where it would be able to mobilise higher revenue with less effort, he said.

However, the tax officials said the collection of source tax also needs intensive monitoring as many of the tax deducting authorities refrained from depositing tax properly that they deducted from the service seekers.

In the last FY, the NBR's revenue collection was poor due to the lockdown imposed to contain the spread of coronavirus.

Following the sluggish economic activities since March 8, 2020, the VAT collection growth dropped to 1.25 per cent, followed by income tax 2.04 per cent and customs duty 6.79 per cent.

The government has set a Tk 3.30 trillion tax revenue collection target in the current FY against actual collection of Tk 2.61 trillion in the last FY.