The unemployment rate among the university graduates in Bangladesh is 38.6 per cent, according to a recent study, conducted by the Bangladesh Institute of Development Studies (BIDS).

A total of 1,574 students were interviewed for survey of the study - 'Tracer Study of Graduates of Universities in Bangladesh'. 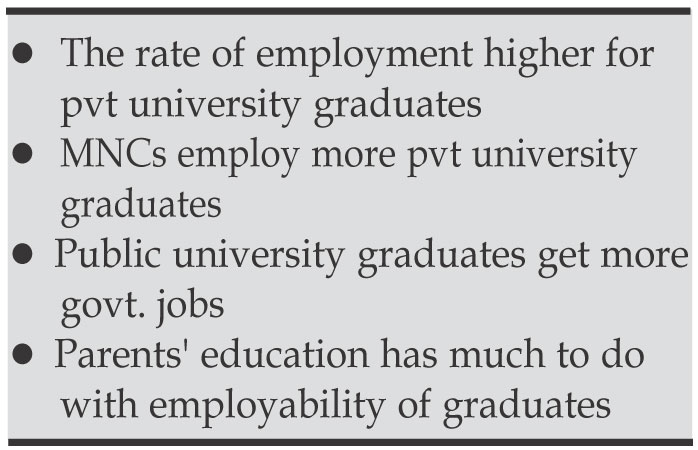 For the graduate survey, randomly selected students - who graduated in the 2015-16 academic year, were traced out and surveyed. The study ended up surveying 975 graduates to trace the unemployment scenario.

The study highlighted the factors behind such a large-scale unemployment, and revealed that the graduates are not getting suitable jobs as per their expectation.

The graduates prefer to be cadres of the Bangladesh Civil Service (BCS), so they need to wait for a long time to complete the employment procedure.

Besides, the students of engineering and other technical subjects face difficulties in getting jobs due to the mismatch between university qualification and demand at workplace.

The study also disclosed that employability varies according to the type of university. Nearly 44 per cent students of the private universities get employment. The rate which is higher than that of the public universities (32 per cent).

Besides, 34 per cent of the graduates get jobs within two to three years after completing their graduation, according to the state-run think-tank study.

About 70 per cent of the graduates think that proper training is needed for improving their skills to hit the job market, it added.

The BIDS conducted surveys among present students, most recent graduates, institutional or departmental heads, and employers of university graduates to perceive the graduates' current employment status and to assess their competencies from different perspectives.

More than 50 per cent of the self-employed graduates said they want to be entrepreneurs and begin their career in business, the BIDS study added.

Some 15 per cent said they have set up own businesses as an alternative to 'good job.' It seems that 80 per cent of the students, who decide to be entrepreneurs, wish to continue with the entrepreneurship in the future.

About 15 per cent of the university graduates pursue further academic degrees either on full-time or part-time basis. About two-third of the full-time/part-time students do some part-time income-generating activities (tuition, own business etc).

Interestingly, there is a strong correlation between parents' education and graduate employability in Bangladesh, according to the study.

Siban Shahana, Research Associate of the BIDS and a team member of the study, told the FE that more than 40 per cent of the graduates, whose parents have completed master's degree, got a job after completing their university education.

The rate is almost half (21.9 per cent) in case of the graduates, whose parents do not have any formal education.

The study drew sample of academic departments/institutes from the list of 40 Academic Fund Innovation (AIF)-receiving public and private universities of Bangladesh.

Out of the 40 universities, 36 were selected as the sampling frame of the study. Of the 36 universities, the numbers of public and private universities were 27 and nine respectively.