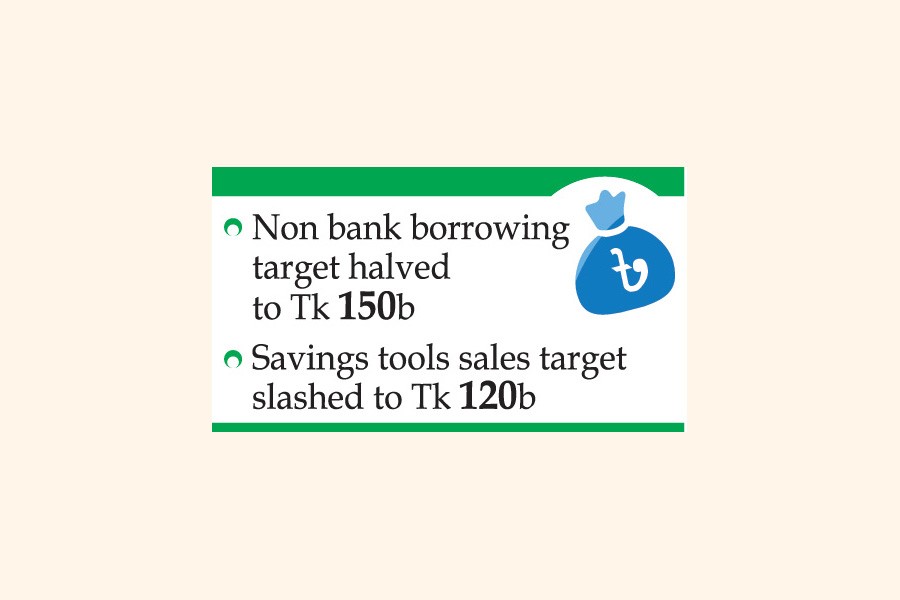 The government has slashed its non-bank borrowing target by half to Tk 150 billion to finance the budget deficit of the current fiscal year ending on June 30, officials said.

The government's net non-bank borrowing target has been revised at Tk 150 billion, an official familiar with debt management said.

The ministry of finance has revised, in fact, has been forced to revise downward, the target mainly because of the lower net sales of the government saving instruments in the recent months, the official explained.

The target for net sales of savings tools had also been slashed by 55.55 per cent to Tk 120 billion from the original one of Tk 270 billion, according to the officials.

The officials expected the revised target of the national savings certificates (NSCs) sales to be achieved by the end of the next month.

"The sales of NSCs normally increase during the May-June period of each fiscal year as taxpayers want to get income tax benefit," another official familiar with the savings scheme said.

Meanwhile, the government's net non-bank borrowing sank by more than 68 per cent to Tk 85.67 billion in the first-half (H1) of this fiscal from Tk 267.98 billion in the same period of a year earlier, according to a central bank report.

"The net sale of government saving instruments has significantly declined and stood at Tk 54.33 billion during the July-December, 2019 compared with Tk 249.94 billion at the same period of the preceding year due mainly to the automation of the selling process and submission of TIN certificate," the Bangladesh Bank (BB) said in its monthly report on "Government Borrowing from Domestic Sources."

However, the net domestic borrowing of the government covering both banking and non-banking sources reached Tk 535.14 billion in the first half, which was 69.2 per cent of the original budget target for the outgoing fiscal.

Meanwhile, the government has lifted its bank borrowing target by more than 54 per cent to Tk 729.51 billion from the original target of Tk 473.64 billion for the FY '20, compelled by lower revenue collection and sluggish sales of NSCs.

During the H1, the actual non-bank government borrowing stood at Tk 85.67 billion, which was 28.6 per cent of total original budget target for the fiscal 2020, according to the BB report.

Talking to the FE, a private banker as well as an investor in the savings tools, said the government's reform is a welcome step, but some restrictions on sales should be eased to encourage the savers.

"Individuals are not allowed to invest a maximum of Tk 5.0 million in different schemes, but the ceiling is not specified in the government's notification," the banker explained.

The government has already installed an online database under the Public Expenditure Management Strengthening Programme to see whether the savings opportunity is abused by savers exceeding the investment limit or making 'benami' (fictitious) investments.

Under the programme, the savers will require to produce national identity cards, bank accounts, mobile numbers and tax-identification numbers while purchasing the national savings certificates and bonds.

Even those who have already invested in the savings certificates and bonds will need to submit the similar documents to draw yields or encash matured investments.

Besides, the savers will be required to make payment in cheque for purchasing saving certificates of over Tk 50,000.

Regarding such reforms, the global credit ratings agency Moody's said the administrative reforms have begun to dampen demand for NSCs, which are social savings instruments that offer an interest rate premium over domestic instruments.

However, economists have been opposed to high yield rates of savings instruments as those heighten the domestic debt burden of the government and create distortions in the financial market.