Non-RMG exporters to get bond facility 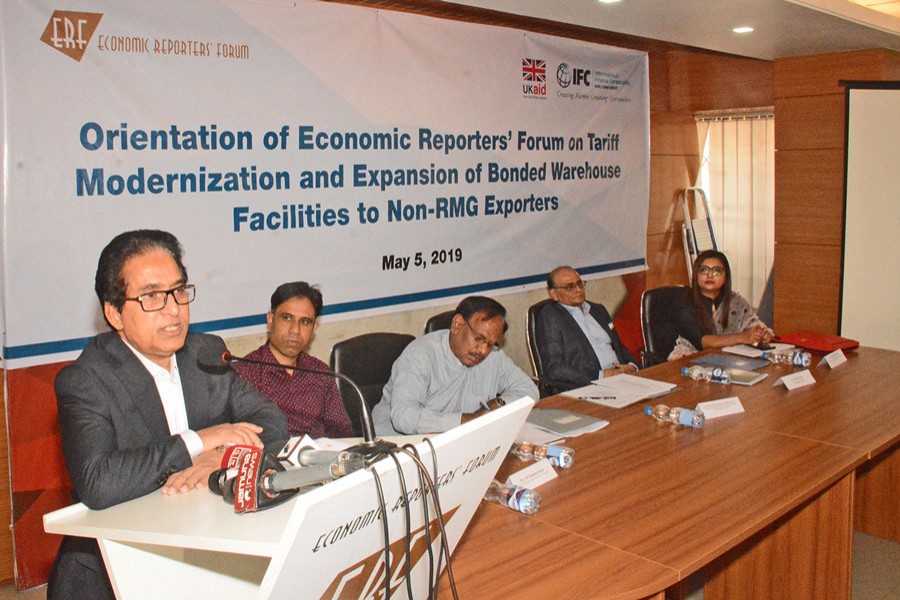 The National Board of Revenue (NBR) has started a thorough review of the existing bonded warehouse facility as part of its move to extend the same to non-apparel exports, its chief said Sunday.

Readymade garment (RMG) makes up around 85 per cent of the country's exports, thanks to the policy support of the government, chairman Md Mosharraf Hossain Bhuiyan said.

"Now time has come we diversified export-basket and expand the duty-free facility to other export-oriented sectors," he said.

The NBR chairman's comments came at an orientation programme arranged for the members of the Economic Reporters Forum (ERF).

The programme titled 'Tariff modernisation and expansion of bonded warehouse facilitates to non-RMG' exporters,' was organised by the ERF in collaboration with Bangladesh Investment Climate Fund II (BICF) of the International Finance Corporation (IFC).

The NBR chairman inaugurated the programme at the ERF office.

The NBR boss said leather and jute exporters are on the priority list of the potential recipients of bonded warehouse facility.

He urged reporters to unmask the identities of abusers of the duty-free benefit under bonded warehouse facility.

He said local industries are bearing the brunt as duty-free products are sneaking into the market due to the abuse of the facility by vested quarters.

Responding to a question, he said punitive measures have been taken against some 30 companies in Dhaka and 29 companies in Chattogram for the abuse of the bonded warehouse facility.

"The bond licences of the companies that failed to show exports using the relevant duty-free items might be cancelled," he said.

Dr Sattar said high protective duty is working as disincentive to export as industries focusing more on domestic-market than on overseas sales.

"Economic growth is not possible on the basis of only domestic market expansion. Employment would not be generated if export market is not expanded," he added.

Domestic market accounts for just 0.5 per cent, or $300 billion, of the $75 trillion international market, he added

He said high protective tariff, averaging 26.6 per cent, is also responsible for hike in prices of consumer goods.

Many of the consumer goods in Bangladesh are pricier than that of other countries, he added.

"RMG sector fetches $32 billion of the total export earnings of $37 billion. Export diversification is not satisfactory due to unfriendly tariff regime," he said.

Tariff escalation ratio is the highest in Bangladesh, at 3.5 per cent, compared to other countries, he said.

She said the country could have increased its export earnings by $4.2 billion to $ 8.4 billion between 2013 and 2017 period if it could expand the bonded warehouse facility to non-RMG exporters.

Higher incentives for the domestic market are discouraging exports, she added.