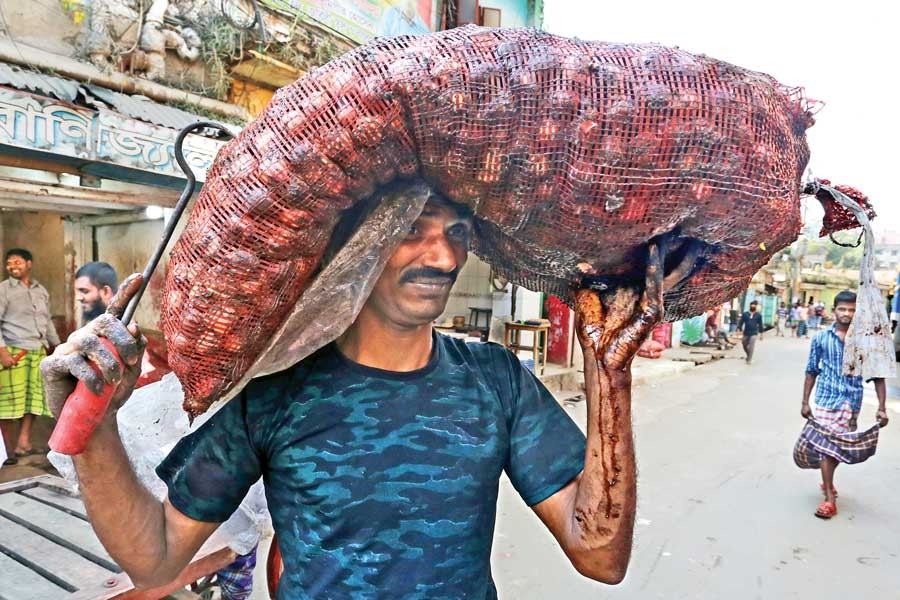 Some large importers of the country have been engaged in the battle against the runaway onion price as the fight has taken to the air route.

For the first time in the country, the importers are procuring the spice item by airways in a bid to cool the overheated local onion market.

The prices of the local variety of the item have crossed the Tk 200 mark. The rates are creeping up every day.

The importers are procuring the widely-consumed cooking ingredient from Egypt, China, Turkey, Pakistan, Afghanistan and the United Arab Emirates.

The private sector business behemoth S Alam Group has joined the band of importers procuring it through air routes. It is importing 500,000 tonnes of onion to pull down the prices.

Mohammed Saiful Alam, chairman and managing director of S Alam Group, told the FE that they were procuring onion from Egypt and Turkey initially through air routes to ensure supply of the key essential to the local market in the shortest possible time.

"Our first consignment of onion by air is expected to reach Dhaka in the next couple of days," Mr Alam said.

He said his group would continue importing the most-consumed item through the air routes as long as it takes to stabilise the local market.

The private sector initiatives came as the government's efforts taken so far to rein in the prices of onion proved unfruitful.

The Ministry of Commerce on Friday said that such imports would help cool down the skyrocketing prices of the spice.

It said the government was also importing onion through its trading arm Trading Corporation of Bangladesh (TCB) which sells the commodity in the open market at a subsidised rate.

The MoC in its statement issued on Friday afternoon said that many importers were procuring onion through sea routes also. Onion is usually imported from neighbouring India and Myanmar through land-ports.

Abul Bashar Chowdhury, chairman of Chattogram-based BSM Group, told the FE that they were also procuring onion through the sea route.

"I don't usually import onion, last time I did it in 1993 but this time we are doing the same to stabilize the local market," Mr Chowdhury said.

He said a total of 3,000 tonnes of onion would arrive within a couple of weeks, provided that there is no transshipment delay.

The local variety of onion sold at an extortionate rate of Tk 250 a kg in Dhaka's retail outlets on Friday, signalling a further rise unless any palliative steps are taken to this end.

According to traders and consumers, imported varieties (China and Myanmar) retailed at Tk 220-230 a kg.

Customers alleged that even rotten onion from imported varieties was priced at Tk 120 a kg at the Shyambazar wholesale market.

The prices of the local onion were Tk 200 and Tk 170 a kg on Thursday and Wednesday respectively.

An FE correspondent visited Motijheel, Khilgaon, Kaptanbazar, Jatrabari and Shantinagar kitchen markets and found that the local variety was selling at Tk 250. The imported varieties were traded at Tk 220-230 a kg.

When asked, retailers said they had to purchase onion from wholesalers at higher rates, compelling them to raise the price at the retail level.

A retailer at the Fakirapool kitchen market told the FE that the Shyambazar wholesalers did not sell any quantity of onion below five kilogrammes to the retailers on the day.

Some Shyambazar traders showed to the FE their empty godowns as their stocks had emptied.

They said imported onion from Myanmar was sold at Tk 150 a kg at Teknaf, Cox's Bazar, on Friday.

The cost of onion stands at Tk 200 a kg at the wholesale level when transportation and other expenses (to reach Dhaka) are included.

In another development, the government's monitoring teams raided various kitchen markets on Friday to contain the vicious spiral of the onion prices.

The consumers in the city markets expressed their utter disappointment over the excessive prices of onion.

Letting out frustrations, they said all the government measures to check prices proved futile.

The frustrated buyers urged the government to act promptly to stabilise the market and also suggested more open market sales of onion.

The state-run TCB has been selling onion at Tk 45 a kg in Dhaka for months.

"We can't understand why and how the onion price is rising despite its plentiful supply in the market," private job-holder Yunus Ali told the FE on Friday.

Meanwhile, the Bangladesh Competition Commission (BCC) served notices on some wholesalers and importers asking them to give reasons behind the ongoing onion price hike.

Md Mofizul Islam, chairperson of the Commission, said the country had an onion stock of 300,000 tonnes, when India imposed a ban to export to Bangladesh and the price was only Tk 30 a kg.

"The onion inventory in the country was adequate when the Indian ban came. To my view, it was quite adequate to meet demand for onion for at least two months," he added.

"I don't understand how the price of the same shot up to the present level. So we issued the letter to the market players asking them to respond quickly, the BCC chief said.

The BCC, formed at least four years back to ensure competition in the country, said that it would take punitive action against the wrongdoers.

A lack of timely action is partly blamed for the astronomical rise in onion prices as the commerce ministry paid no heed to businesses' apprehension about a possible price spiral.

Officials said the ministry sat with stakeholders in its conference room in June to review the supply, demand and price situation of key commodities.

At the meeting, some Shyambazar-based trade leaders said a big bulk of the locally produced onion had rotten because of rainwater during the harvest time this year.

They apprehended a crisis centring on a gap between demand and supply of the spicy kitchen item.

A senior official, who attended the meeting, told the FE on Thursday that the then commerce secretary Mofizul Islam did not pay heed to this apprehension.

Rather, Mr Islam angrily asked the business leaders to place before him the proof that onion rotted.

He accused the tradespeople of preparing the grounds for raising onion prices by spreading false information.

By August, the price of the local onion went up to Tk 50 per kilogram and to Tk 60 by the first week of September.

In mid-September, neighbouring India imposed a minimum export price of onion at $850 per tonne.

Bangladeshi importers said they had been importing the key cooking ingredient at around $300 per tonne before India slapped the minimum export price.

The Indian decision adversely impacted the onion market price in Bangladesh, pushing up the price to nearly Tk 100 per kilogram.

On September 29, India slapped an onion export ban amid the price spiral of the item in its own market.

Due to the Indian action, onion price in Bangladesh then started shooting up.

Another senior official said the ministry is now taking various steps, including onion import through special cargo planes, to tame the price.

"Had the ministry taken steps in line with the businessmen's advice, onion price might have not reached this level," he told the FE.

In the first week of October, he said, 10 joint secretaries were sent to onion production and import zones to monitor the stock, supply and price situation.

On their return from field trips, the officials submitted reports to commerce secretary Jafar Uddin, suggesting immediate steps to import onion to avert an impending crisis.

However, the ministry only last week started studying the reports, competent sources said.

Despite repeated attempts, secretary Mr Jafar could not be reached over phone for comment.