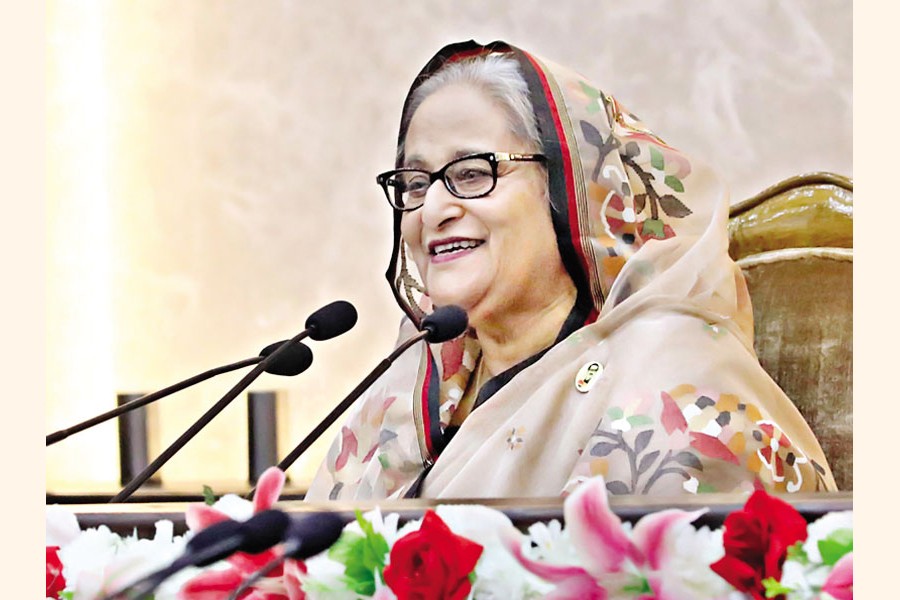 Describing the Padma Bridge as the symbol of national pride, Prime Minister Sheikh Hasina on Wednesday said none can raise question about the standard of the multipurpose bridge which opens on June 25, reports UNB.

"We've not made any compromise over the standard in the construction of Padma Bridge. The bridge was constructed with the world's latest technology and materials. The whole construction process has been completed maintaining the highest standard," she said at a press conference at her office.

"I hope none can raise any criticism regarding the standard of the Padma Bridge," the premier said citing remarks of some critics of the government over the bridge issue.

Replying to a question, she said Bangladesh got back its dignity due to the construction of the country's longest bridge with its own funds in a brave move after the World Bank withdrew from the project.

"I thank them (the World Bank). Since that incident took place and we constructed the Padma Bridge with own fund with courage, today Bangladesh has got back its dignity," said Hasina.

Talking about the cost of Padma Bridge, the prime minister said as per the revised DPP, the total allocation was Tk 301.93 billion (30,193.39 crore), but the allocation for the main bridge was Tk 121.33 billion (12,133.39 crore) (including Tk 10 billion for installation of 400-kv electricity transmission line and gas line).

Besides, the Tk 94 billion was allocated for river training work, Tk 19.07 billion for approach roads (including two toll plazas, construction of two buildings for police stations and three service areas), Tk 15.15 billion for the rehabilitation of the displaced people (caused by the project) and Tk 26.98 billion for land acquisition, she noted.

PM Hasina explained the reasons behind the rise of project cost compared with the old design. Those include increasing the length of bridge from 5.8 km to 6.15 km, changing the bridge design to keep the scope for river vessel movement under its 37 spans not only three ones out of total 41 spans, incorporating steel structures instead of concrete ones in the bridge and enhancing the depth in case of filing works.

The rise in the cost for rehabilitation of the people who lost lands caused by the project and compensation against acquired lands are also among other reasons.

Noting that the road and rail through the bridge will directly connect the country's 21 southern districts with the capital, the PM said it will ease the long-lasting sufferings of the people in this region and will accelerate the economic progress.

Hopefully, the bridge will accelerate the GDP growth by 1.23 per cent and the poverty reduction rate by 0.84 per cent every year, she said.

"Today, we have constructed the Padma Bridge overcoming all conspiracies and obstacles," said Hasina extending her thanks and gratitude to the people of Bangladesh for standing beside her government in this regard.

She said the government is putting emphasis on the development of agro-processing industry in the southern region following the construction of the bridge.

She said her government has continued the implementation of other development projects in the country simultaneously with the construction of Padma Bridge.

The PM said her government takes every project following proper assessment of the returns.

Though the World Bank cancelled its funding to the Padma Bridge project, Bangladesh has been able to get the fund back for other projects, she said.

Lambasting those who criticised the government for construction of the bridge with own fund, the prime minister said they have lack of self-confidence. "But I am the daughter of Father of the Nation Bangabandhu Sheikh Mujibur Rahman. I say what I can do. Inshallah, I must do what I say," she added.

Roads, culverts to be constructed at necessary points to prevent flood in future: PM

Turning to the flood situation in the country's northeastern districts, the PM said the government will construct bridges and culverts on all the identified points of roads for the drainage of flood water in order to prevent such calamity in future.

Noting that the flood affected 11 districts, she said the flood water was channelled smoothly after cutting roads at different points at her directive.

"I will construct bridges or culverts at the points where the roads were cut or damaged so that water does not get stagnant there anymore in future. Because it is also a lesson for us…..I have directed to identify the points," she said.

Hasina said the government has taken timely measures to ease the sufferings of the flood-affected people. "We have taken necessary steps to face the flood….," she added.

She said the entire government administration, including the armed forces and law enforcement agencies, as well as her party members have been working sincerely to support the flood victims.

The officials of the administration reach to the flood victims risking their lives, she said.

The PM said she has also directed to take steps to face the post-flood situation particularly to prevent post-flood diseases and to boost crop production.

In reply to a question over the construction of the 2nd Padma Bridge over Manikganj-Rajbari point, Sheikh Hasina said it must be assessed first how much it is necessary and then the project can be taken.

In reply to another question over the parliamentary elections, the PM said how BNP can say that the 2018 general election was not a participatory one.

She said BNP changed their nominated candidates several times in a constituency due to nomination business.

"Besides, they left the election midway. Can the BNP deny it? If so, how can they say the election was not participatory?" she said.

The country has gained massive development today as there is continuation of democracy, she said.