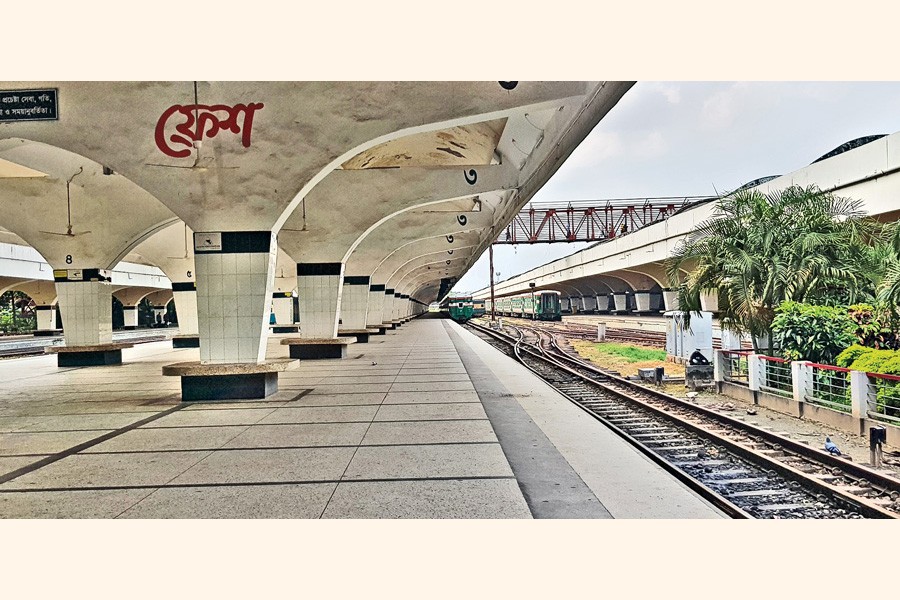 Unusual times, unusual happenings: The bleak and desolate looking Kamalapur railway station on Friday noon. Home-going people in their thousands scramble to ride trains at this station on the eve of every Eid-ul-fitr celebration. — FE photo

Bangladeshis like Muslims around the world are going to celebrate the largest Eid festival in an unprecedented lockdown aimed to thwart the spread of coronavirus pandemic.

Depending on the sighting of the Moon, the Eid-ul-fitr is going to be celebrated in the country either tomorrow (Sunday) or the day after tomorrow (Monday).

The National Moon Sighting Committee meets at the office of Islamic Foundation in Baitul Mukarram this (Saturday) evening to decide on the Eid day.

The meeting will be presided over by State Minister for Religious Affairs Sheikh Md Abdullah, the Islamic Foundation said in a media briefing.

But the fast-spreading deadly virus has cast shadow over the people's religious fervor, enthusiasm and festive mood.

Unlike previous occasions, there has not been any mad rush of home-goers at rail stations, bus and launch terminals or even the airports this year.

Except for a small number, most of the city dwellers are unable to leave the capital to celebrate Eid with their dear and near ones in their respective village homes.

Even there will be no Eid jamaat at Eidgah or open grounds, no socialising, shaking hands or hugging in this Eid-ul-Fitr. Instead, people have been asked to offer Eid prayers at nearby mosques, following special instructions of the ministry of religious affairs.

The religious affairs ministry on May 14 issued an urgent notice listing at least 13 instructions for the people and the mosque authorities to follow during Eid prayers.

The government imposed shutdowns on March 26 in a bid to contain the spread of the novel coronavirus in the country and it has been extended sixth times since.

The infections are breaking record everyday as on Friday the country sees the highest single-day 24 more deaths from the coronavirus and 1,694 new cases of infections after testing 9,727 samples in the last 24 hours.

With this, the death toll from the deadly virus rose to 432 and the number of total infections stood at 30,205.

In normal years, when Eid approached, millions of people decamp from their homes in cities to native hometowns. It all meant they would celebrate Eid together with their family members.

Despite the shutdowns, thousands, if not millions of people are leaving the capital for their hometowns ahead of Eid.

In the absence of public transports, these people crammed onto pickups, trucks and motorcycles to reach their destinations or at least the exit points of the capital, defying all social distancing protocols. Some even set out on foot because they could not find a transport.

Ordinarily, markets would be full of excited parents and happy children, and people would indulge in typical Eid shopping. But this time around, due to the pandemic, the traditionally festive Eid mood has been subdued, though a few shops and small markets still appear busy handling masked customers.

Most of the shopping malls and markets remained closed even the government let them open.

Many shopping malls, shop owner associations kept market and shops shut on their own.

"The government directive for opening shopping malls and general shops before Eid was for small businesses who do not have cash or savings," said Helal Uddin, president of the Dokan Malik Samity.

He said the initiative was to help small businesses not for all shopping malls.

"Now these people have some money and they can continue a few more months," he said.

People mostly stayed at home during the holy month of Ramadan. The pandemic dissuaded devotees from offering taraweeh prayers at mosques, though the government has of late eased restrictions on congregation in prayer houses.

Abul Kashem, an octogenarian who lives at Dhanmondi 15 with his son and daughter-in-law, is celebrating Eid for the first time in Dhaka.

"I have never seen an Eid in my lifetime like this, we celebrate every Eid in our hometown Lakshmipur, but this year we can't go anywhere let alone celebration," he told this correspondent over phone.

"I was in Cumilla during the liberation war. It was limited Eid celebration that year, but that was pale in comparison with this year," he said.

"I may never see a normal Eid again," the elderly Kashem said in an emotionally choked voice.

According to the religious ministry instructions, there will be no carpets in the mosques during prayers, entire mosques should be disinfected before prayers, and everyone will have to bring their own prayer mats (jainamaz).

There should be soap or hand sanitiser at the entrance of every mosque; people will have to maintain distance and follow health guidelines during offering prayers, the instructions added.

The notice also said people have to perform their wudu or ablution at home, and wear masks before going to the mosques.

Elderly people, children, ailing persons and their caregivers should not attend Eid prayers, it said.

The management committee of each mosque, Khatib and Imam will have to ensure the implementation of the instructions.

People have also been requested not to hug or shake hands after Eid prayer.

In case of violation of the instructions, the local administration and law enforcement agencies will take legal measures.

Religious Ministry spokesperson Mohammad Anwar Hossain said the public notice was issued for the people in general and the authorities in particular.

"Local administration and police forces will enforce the instructions," he said.