Bangladesh's per capita income (GNI) went up by US$ 155 to US$ 2,064 in the final quarter (April-June) of the last fiscal year, official data released on Tuesday showed, despite severe adverse impact of Covid-19 pandemic on the country's economic activities during the period. 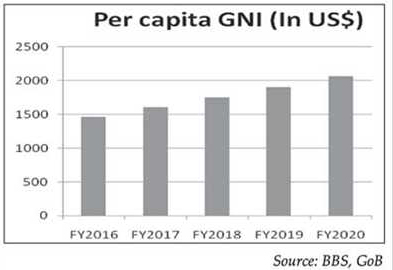 However, the per head earnings of the population at current price was lower than the preliminary target of $ 2,173 estimated before the COVID-19 pandemic.

An official at the BBS said the per head earnings could be much higher than the provisional estimation for the FY2020 if the country was not affected by the devastating coronavirus pandemic.

In the FY2020, the GDP growth increased by 5.24 per cent, according to the BBS estimate.

Meanwhile, the government has targeted the per capita GNI at $ 2,326 for the current FY2021, despite the economic impact of the pandemic.

"The per capita income growth in the current fiscal may not be achieved at an impressive rate that the country has seen over the last few years. But the per head earnings will rise as our both gross domestic product and the gross national income will be rising in this year too," said a finance ministry official.

He said that after bouncing back from the COVID shocks, the GDP growth could return to its impressive trend in FY2021 as the government was expecting 8.2 per cent expansion in the current FY.

Bangladesh has been one of the top five fastest growing economies in the world with its stunning GDP growth rate of more than 7.0 per cent over the last few years.

Then it took only two years to surpass the 7.0 per cent rate in FY2019 when the economy expanded at a rapid clip of 8.15 per cent.

The current fiscal year's target has been eked out at 8.2 per cent GDP growth, but the coronavirus pandemic has made reaching that goal highly unlikely.