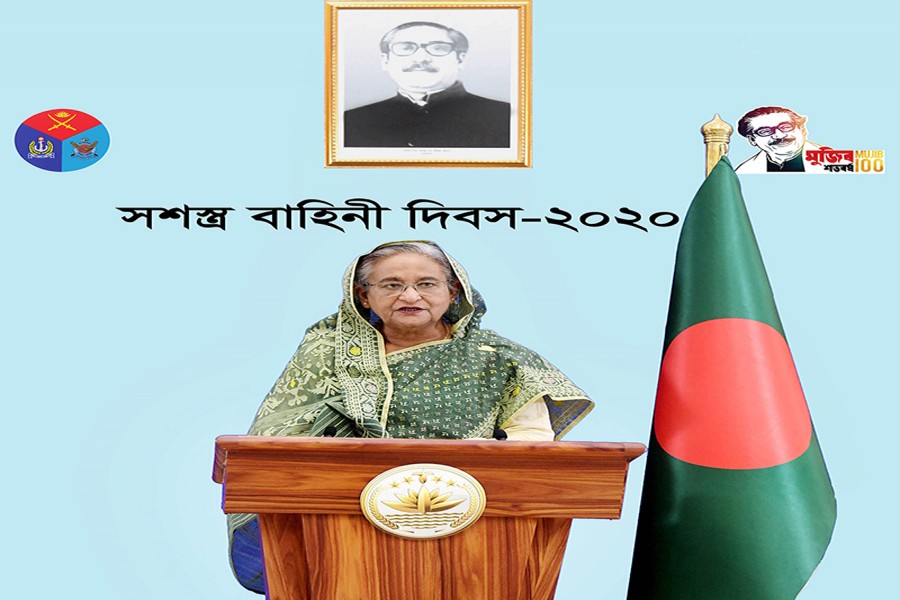 Prime Minister Sheikh Hasina expected on Saturday the armed forces to earn enhanced professional expertise to contribute more to the nation building campaign being imbued with patriotic spirit as it emerged through the process of 1971 Liberation War, reports BSS.

"The armed forces that emerged on a smaller scale in the process of the Liberation War today became a gigantic institution," the premier said in a nationwide televised address on the occasion of the Armed Forces Day 2020.

She added: "I pray to most merciful Allah - let the members of the armed forces contribute more to the country's defence being empowered with professional efficiency."

The armed forces this year celebrate the Day discarding the traditional festivity in view of the Covid-19 pandemic, prompting Sheikh Hasina, who holds the charge of the portfolio of defence ministry, to deliver her address using the virtual platform.

In her nearly 13-minute speech, Sheikh Hasina listed elaborately the armed forces role in different difficult situations in the country and troubled regions abroad as a major stakeholder of UN blue helmet missions over the years and its current response in combating the Covid-19 pandemic.

The premier reviewed the gradual development and modernization and development of army, navy and air force till date since 1971, particularly recalling the formulation of national Defence Policy by Father of the Nation Bangabandhu Sheikh Mujibur Rahman.

"We enriched all branches of the armed forces with modern military hardware and equipment in the past one decade," she said.

Sheikh Hasina added: "I firmly want to point out that the quantum of modernization the armed forces witnessed during the tenure of our government, never happened in any period in the past."

The premier said her government framed the 'Forces Goal-2030' keeping consistency with the 1974 Defence Policy and in line with goal the armed forces were organizationally restructured, imparted to improved training and equipped with specialized defence hardware.