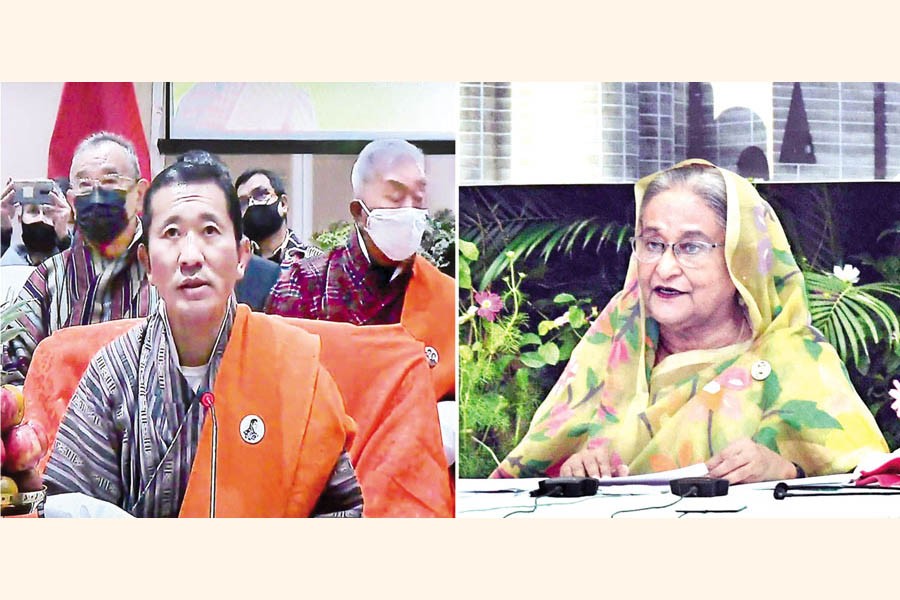 "The PTA which both sides signed today will contribute to further consolidating the relations between our two countries," she said, joining the signing ceremony virtually from her official Ganabhaban residence.

She added that the PTA signing was held Sunday to make the day memorable as on this day in 1971, Bhutan became the first country in the world to recognise Bangladesh's independence and it marks the 50th anniversary of bilateral and diplomatic relations between the two countries.

"It is time to make our extraordinary relations even more meaningful for mutual benefits and for the overall development and well-being of our citizens. It is in this spirit that we have signed today the Bangladesh-Bhutan PTA," said the PM.

Noting that it is a historic moment, she said Bangladesh is signing its first ever PTA with any country in the world and this country is also the first country that recognized Bangladesh as a sovereign and independent state after the War of Liberation in 1971.

Under this agreement, Sheikh Hasina said, a wide range of products from Bangladesh and Bhutan can find duty-free entry into each other's markets, adding that the PTA also has a provision for including an additional list of products through mutual consensus.

"Once the agreement comes into force, I believe more people in Bangladesh can have access to fresh Bhutanese apples and oranges, while the fashion-conscious people of Bhutan can choose from more varieties of quality apparels from Bangladesh," she hoped.

The PM also said that infrastructure projects in Bangladesh can further benefit from boulder stones from Bhutan, while Bangladeshi pharmaceuticals can increase contribution to the health sector in Bhutan.

During the ratification of the treaty, both the prime ministers unveiled a logo virtually, marking the 50-year friendship between Bangladesh and Bhutan.

Both the PMs later cut cakes in celebration of signing the PTA agreement and 50 years of diplomatic and bilateral relations between the countries.

An audio-visual presentation was made on bilateral engagements between the countries marking their 50 years of relations.

On this occasion, Sheikh Hasina offered Bhutan to use its existing ports and newly developed Syedpur regional airport for mutual benefits of the two countries.

She said, "We are developing our Chilmari port and Pangaon Port in Narayanganj. Not only that, if wants, Bhutan can use any of our three ports - Chattagram, Mongla and Payra. We are developing a regional airport in Syedpur. For Bhutan, it is open. If you wish you can use it too."

The Prime Minister, however, said, "As we endeavour to reach our goals, we want valuable cooperation of our friends and neighbors to strengthen our government's initiatives, including regional connectivity designed to make all of us in the region prosperous."

She continued: "The Covid-19 pandemic has opened our eyes to the new realities that we must consider while we strive to move forward."

The Prime Minister added that the world is countering new and deeper fallouts of the Covid-19 pandemic on countries and communities across the globe.

"The evolving pandemic has propagated beyond a health crisis into a growing threat on socio-economic systems and livelihoods. To counter the impact of this unknown enemy, Bangladesh has shared excellent cooperation with Bhutan and other South Asian neighbours and beyond. Stronger regional and international cooperation is necessary in the coming days for mitigating the impact of the pandemic and for the rebuilding phase," she opined.

She came up with the opinion that the next 50 years will witness sustained development and happiness of citizens of the region.

At the outset of the ceremony, the premier paid homage to the Greatest Bangalee of all time, Father of the Nation Bangabandhu Sheikh Mujibur Rahman, four national leaders, 3.0 million martyrs and 0.2 million women who were violated during the War of Liberation in 1971.

"The occasion is further blessed as this is the year, we are celebrating the birth centenary of our Father of the Nation, and the auspicious 40th birth anniversary of His Majesty Jigme Khesar Namgyel Wangchuk," she continued.

Noting that the Kingdom of Bhutan has a special position in the hearts of all Bangladeshis, and a permanent place in the history of Bangladesh, she said, "The unwavering support of His Majesty the Third King and the people of Bhutan to our War of Liberation in 1971, and your country's recognition of the blood-soaked independent Bangladesh, evokes powerful emotions in our hearts even today."

The PM said they have observed with great admiration the transformation Bhutan has undergone under the visionary guidance of the Fourth King, His Majesty King Jigme Singye Wangchuck.

"It is today a democratic, modern and progressive country. His concept of "Gross National Happiness" has won the admiration of the world. His able and wise son and successor, His Majesty King Jigme Khessar Namgyel Wangchuck, the Fifth King, has wisely continued with his father's policies in leading Bhutan," she added.

In Bangladesh, she said that their aim is similar and that is to strengthen democracy, achieve economic growth, and make the citizens happy individuals of a hunger-poverty-free developed-prosperous country as dreamt by the Father of the Nation.

"Today, our democratic institutions are stronger, and our economy is on a sound footing. The rule of law and human rights are well established, and we strictly follow a zero-tolerance policy against all forms of terrorism and extremism," she added.

Mentioning that the 'Vision 2021' and 'Vision 2041' are guided by the dream of Golden Bangladesh as envisioned by Father of the Nation Bangabandhu Sheikh Mujibur Rahman, she said, "Already significant progresses have been made on food and energy security, education, poverty alleviation, empowerment of women, social welfare, and development with sustained economic growth."