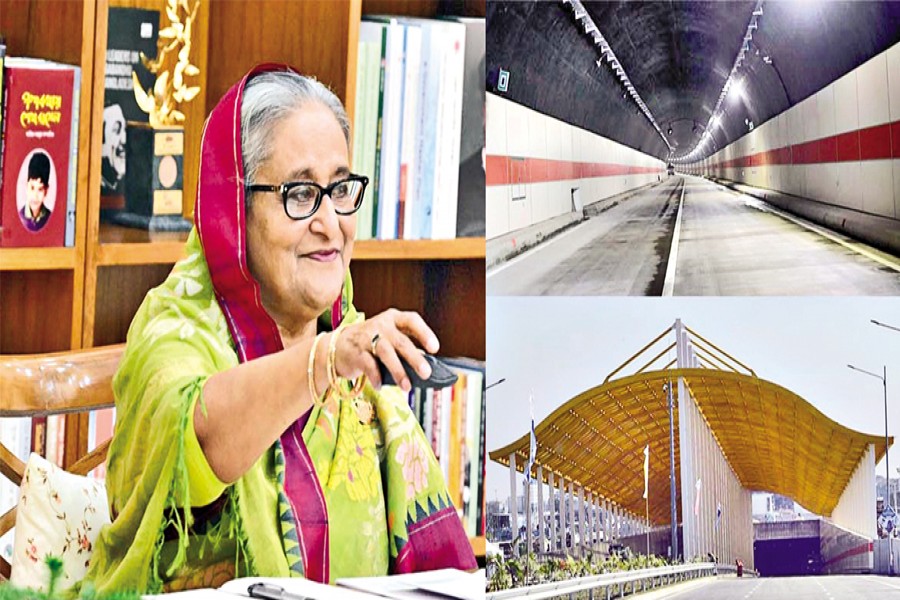 Prime Minister Sheikh Hasina from her Ganobhaban residence virtually inaugurates a function marking the completion of physical work on the south tube (right, top) of the Karnaphuli tunnel in Chattogram city's Patenga area (right, below) on Saturday — PID

Prime Minister Sheikh Hasina urged the countrymen on Saturday to contribute to the development of their own areas as the government is working for the overall progress of the country, reports BSS.

The premier said this while addressing the celebration ceremony of the civil works completion of the south tube of Bangabandhu Sheikh Mujibur Rahman Tunnel under Karnaphuli river in Chattogram.

She joined the function virtually from her official residence Ganabhaban in Dhaka.

Referring to the ongoing development work under the Awami League (AL) government,

she said, "Bangladesh is moving ahead . . . None can stop this stride towards progress anyhow."

Sheikh Hasina, however, suggested the people, who don't see the development works of the government, to go to the eye specialists.

"Our development work is not visible to many people. May be their eye sights are lost. If it is so, they can go to the ophthalmologists. We've established a very good eye institute. After getting treatment from there, they might see the development," she said.

If someone is blind even after having eyes, "then we have nothing to do," the prime minister added.

Sheikh Hasina also said, "Yes, sitting in power, they can devour, smuggle money, smuggle 10 trucks arms and siphon off money. They didn't work for the people's welfare, and even can't do in the future, this is the reality."

At the ceremony, a video documentary on the Bangabandhu Sheikh Mujibur Rahman Tunnel was screened.