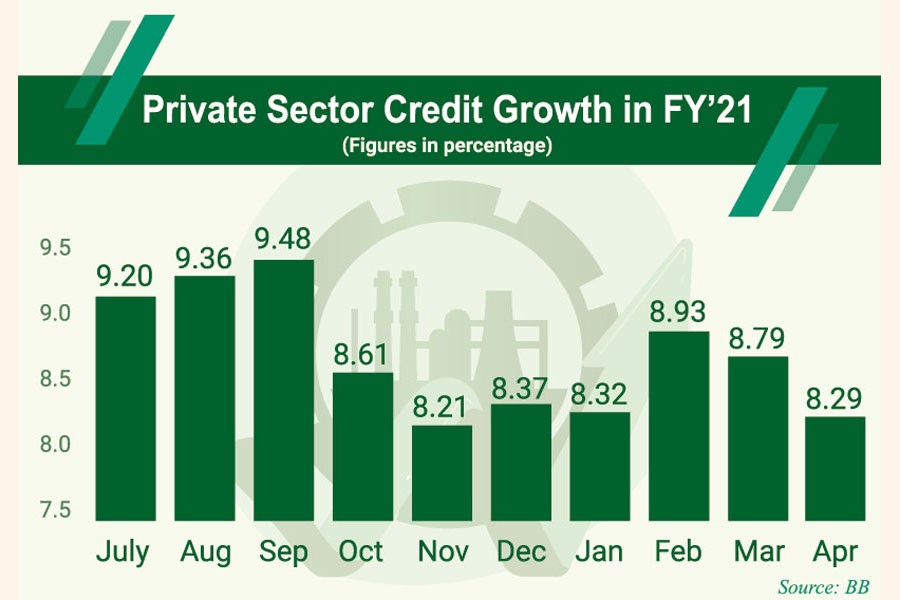 Private sector credit growth decreased further in April, mainly due to the second wave of the Covid-19 in the country, bankers said.

The growth in credit flow to the private sector came down to 8.29 per cent in April 2021 on a year-on-year basis, from 8.79 per cent a month ago, according to the Bangladesh Bank's (BB) latest statistics.

The rising coronavirus infections and deepening uncertainty slashed the private sector credit growth in the last couple of months, according to senior bankers.

Bangladesh's overall imports dropped by more than 10 per cent or US$509.03 million in April, mainly due to the Covid-19 pandemic second wave.

Settlement of letters of credit (LCs), generally known as actual import, in terms of value, came down to $4.36 billion in April, from $4.86 billion a month ago, according to the central bank's latest statistics. It was $4.23 billion in February 2021.

As coronavirus cases continued to rise alarmingly since mid-March, the government imposed a nationwide lockdown for a week from April 5 to curb the coronavirus infections. Later, a stricter lockdown was declared from April 14 to April 21, which was later relaxed and extended until June 16.

Khondaker Golam Moazzem, research director of the Centre for Policy Dialogue (CPD), urged the government to announce a fresh stimulus package worth Tk 300 billion, only for the cottage, micro, small and medium enterprises (CMSMEs), along with the fiscal measures - to bring a positive impact on the country's private sector credit growth in the coming months.

"The scheduled banks as well as non-government organisations (NGOs) and microfinance institutes (MFIs) may act as implementing agencies of the new package for the CMSMEs," Dr Moazzem told the FE.

When contacted, a senior official of the Bangladesh Bank (BB) told the FE that the amount of the private sector credit increased in recent months, but with a falling trend.

"The private sector credit growth will depend on both domestic and global Covid-19 pandemic situations," the central banker said while replying to a query.

He also said imports dropped in April because of lower demand for importable essential items in the domestic market, mainly due to the pandemic. Meanwhile, outstanding loans with the private sector rose to Tk 11,643.31 billion in April from Tk 10,751.71 billion a year ago. It was Tk 10,972.68 billion in June 2020.