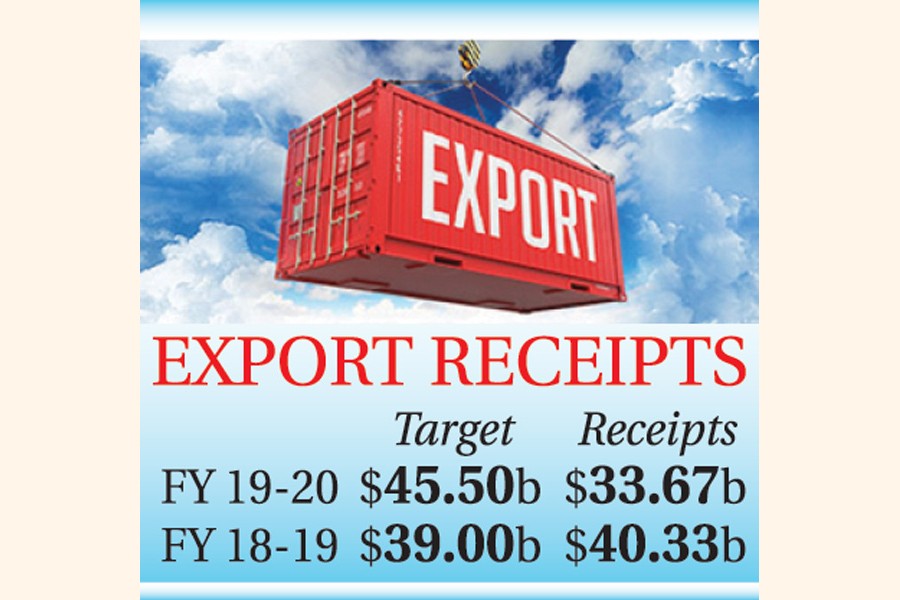 Country's export earnings decreased by a record 17 per cent or $6.86 billion in the just-concluded fiscal since fiscal year (FY) 2001-02.

Export earnings over the decades have been gradually increasing barring the year FY 2001-02 when Bangladesh fetched $5.98 billion against $6.46 billion earned in FY 2000-2001.

The overall $33.67-billion export earnings also fell short of the target by 25.99 per cent last fiscal.

The June earnings also fell short of the target by 31.15 per cent, according to the data.

The ongoing coronavirus pandemic has worsened the overall performance that showed signs of a slowdown before the outbreak, they opined.

The RMG sector contributed about 83 per cent or $27.94 billion to the total export income in FY '20. The sector also witnessed an 18.12-per cent negative growth during the last FY.

Earnings from export of woven garments were $14.04 billion last fiscal, representing more than 18 per cent decline. The earnings were $17.24 billion in FY '19.

Besides, earnings from home textile exports fell by 10.90 per cent to $758.91 million. The figure also fell short of the twelve-month target by 14.82 per cent.

He, however, said it was not unexpected because RMG could not perform well even before the pandemic.

Terming the June earnings 'positive', Mr Hoque said exports would show signs of recovery if the trend witnessed in June continues in the coming months.

"This is a true reflection of the reality. The July-September period is traditionally the lean period for the industry. We will wait to see the impact."

Explaining the overall negative growth, Ms Huq said there has been a fall in global consumption. "We were experiencing a slowdown. The Covid-19 pandemic made it even worse."

Work orders are coming in to the tune of 40-45 per cent compared to the usual flow, she said.

The industry might see sales picking up seasonally during Christmas but a full recovery might take place as late as mid-2021, she observed.

Khondaker Golam Moazzem, additional research director of the Centre for Policy Dialogue, said Covid-19 health risk has put a damper on the economic activities in the importing countries.

As a result, he said, the global demand has slowed down. "This will be challenging if the situation prolongs in the coming months."

He called on global partners, including brands and retailers of the country's exports, for more responsible business practices.

Brands and buyers must give order predictability and assurance of order quantity and they should redistribute their orders to the developing countries like Bangladesh to help them survive the pandemic, he opined.

About the positive growth of jute goods, the researcher said privatisation of state-owned jute mills might help resolve the anti-dumping duty imposition by importing countries for the sector's further growth.

Meanwhile, the jute sector has demonstrated positive growth throughout the last fiscal.

Vegetable export earnings grew by 64.53 per cent to $164 million in the just-concluded fiscal.

Even earnings from furniture grew by 2.03 per cent to $76.41 million last fiscal.

On the other hand, Bangladesh fetched $797.6 million from leather and leather goods exports last fiscal, registering a 21.79-per cent decline over that of FY '19.

Earnings from leather and leather goods were $1.01 billion in FY '18.

According to the data, plastic products witnessed negative growth of 16.09 per cent to $100.52 million.