Record 64 virus deaths in a day 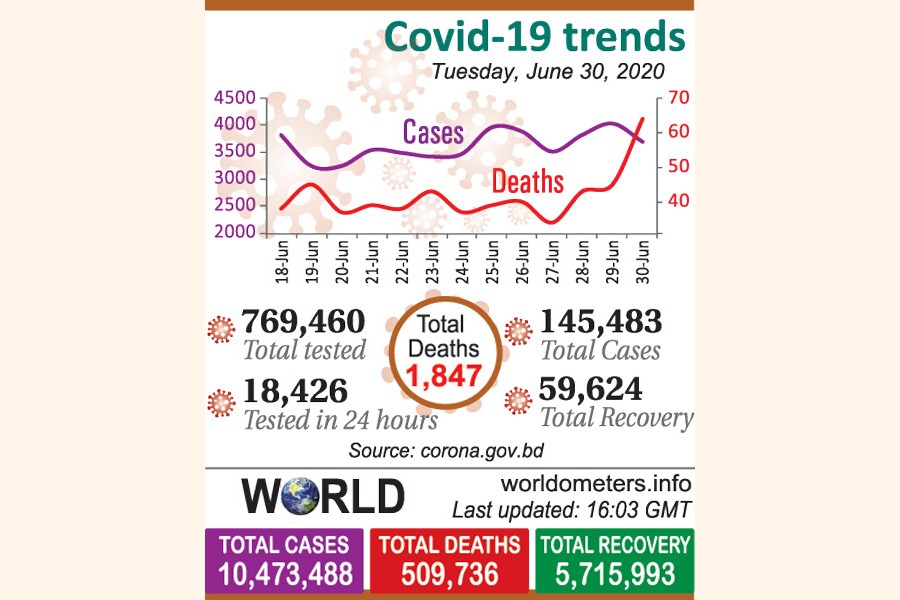 After East Razabazar, Wari is going to be the city's second hotspot where lockdown will be imposed from July 04, 2020, officials said.

The decision came at a meeting with the central committee on implementation of lockdown on Tuesday when the country witnessed the highest single-day spike in the number of fatalities.

The areas in Wari where the lockdown is to be applied are Tipu Sultan Road, Rankin Street, Jahangir Road, Nawab Road, Hore Road, From Joy Kali Temple to Boldha Garden and Wari Road, according to the DSCC source.

Mr Raposh said they will stop all the roads there except two streets which will be opened for light movements of people on emergencies.

"But which roads will be opened have not been decided yet. We will also use Mohanagar General Hospital as an isolation centre during the lockdown days," he added.

Wari was one of the city's 45 areas that the government identified as a red zone considering higher intensity of Covid-19 infections.

East Razabazar under Dhaka North City Corporation was the first place in the city to have been locked down for 21 days as part of the government's zone-based lockdown strategy to contain the pandemic from spreading.

However, the number of infections and fatalities keep ballooning here with registering 3682 new cases along with 64 deaths recorded across the country in the last 24 hours ending on Tuesday morning, the DGHS sources said.

On the day's health bulletin on coronavirus, DGHS additional director general (administration) Prof Dr Nasima Sultana said a total of 18426 samples were tested in 66 labs as two other labs did not submit their activities.

With the tests, a total of 766,460 samples have so far been tested across the country.

Of the tests on Tuesday, some 3682 samples were found Covid-19 positive along with 64 more deaths recorded across Bangladesh during the period, she said.

"With these numbers, the overall tally of confirmed cases and deaths rose to 145,483 and 1,847 respectively," she said.

Thirty-one of the latest deaths were recorded in Dhaka division followed by twelve in Chattogram, seven in Khulna, seven in Rajshahi, three in Barishal, two each in Sylhet and Mymensingh divisions, Dr Sultana said.

The DGHS sources said 64667 people now remain in both home and institutional quarantine while 15147 others in isolation.

Simultaneously, some 1,844 people were recovered from the respiratory disease, taking the overall number of recovery to 59,624, according to the source.

Globally, over 10.4 million people have been infected by the novel coronavirus and 508460 have died until Tuesday 6:30 pm, according to Worldometer info on coronavirus.