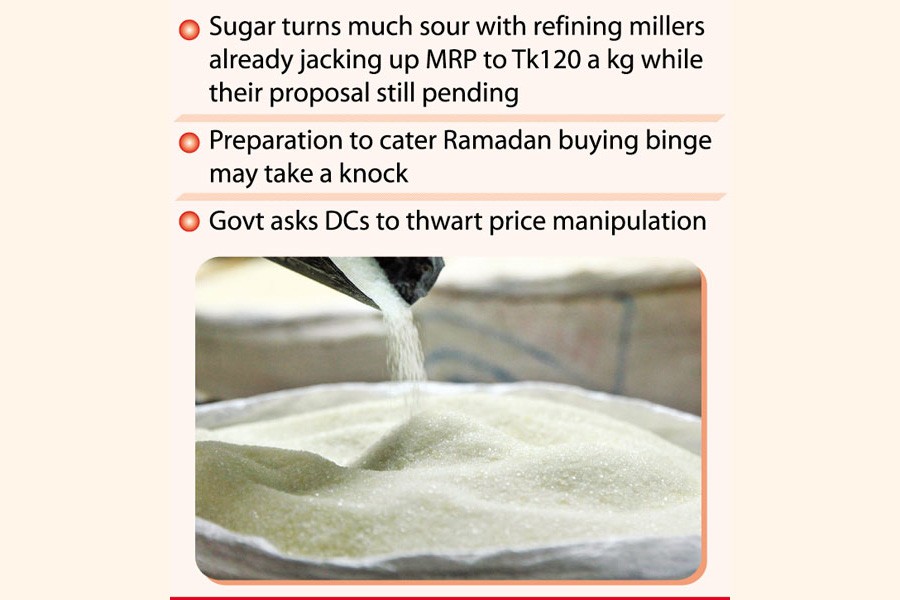 Refiners moved to hike again the price of sugar by Tk 12 per kilogramme, rather preemptively, while the government prepares for adequate supply of essentials during Ramadan buying binge.

Sources said the refiners' association moved to increase the price of sugar -- a most essential item -- amid the existing price spirals and acute shortage of the sweetener in retailing shops. Such move comes while their price-raise proposal is still pending.

Bangladesh Sugar Refiners Association (BSRA) placed the proposal recently by setting the maximum retail price (MRP) of packed sugar at Tk 120 per kg from its present rate of Tk 108 while the MRP of loose sugar proposed Tk 110 from Tk 102 a kg.

The association has already sent a letter to the commerce ministry to inform it about the step, which comes amid flurries of talks over high prices of essential commodities.

"The new proposal has been given to implement by taking the current upward price trend of such items on the international market into consideration," according to the association, whose few members dominate the market with imported sugar refined by them amid a debacle of domestic sugar mills.

They also cite increased dollar price, hike in gas tariffs and production cost counted by domestic refiners as reasons to justify the hike.

Sugar prices already have skyrocketed amid a supply crunch in Dhaka with traders seeing no way out of the problems they see, including a shortage of dollars for import and an increase in gas price.

Market-insiders say if the proposal is implemented by the government, it might encourage others to further increase essential-commodity prices and consumers might be hit hard by high inflation.

On September 17 last, the commerce ministry in a meeting with different traders' associations discussed the recent market prices of sugar and edible oils. The edible-oil prices were revised upward following a proposal of Bangladesh Vegetable Oil Refiners and Vanaspati Manufacturers Association (BVORVMA). But, no decision was taken regarding the sugar price.

The commerce ministry has suggested the NBR to cut the regulatory duty on import of sugar to rein in the abnormal price of sugar.

The ministry has already sent the request to the regulator. After receiving the letter, it has started reviewing the recommendation, a source said.

When contacted, the ministry of commerce (MoC) senior official said, "We have received a proposal from the BSRA recently to increase the price of sugar. But we did not get any approval for implementing the new rates of sugar."

The hardship of common consumers will get intensified further if the prices of the item are hiked, experts concerned said.

There is no alternative to implementing the new rates as prices have been increasing at the international level, including increasing dollar and gas prices, one refiner said.

In November 2022, the government had increased the prices of sugar. The price of packed and loose sugar had been fixed at Tk 108 and Tk 102 per kg.

Currently, the sugar prices are much higher on the retail market, even though the government fixed the maximum retail price of the essential to control the rocketing trend.

There is huge shortage of sugar on the market. No packet sugar is available at shops -- apparently as part of ploy to avoid writing the MRP on the packet. The essential in loose form is still selling at Tk 130/135 at groceries.

Traders said they were still selling their old stock bought at higher prices, forcing them to sell those at high prices.

The Bangladesh Bank (BB) has been requested by the commerce ministry to provide required dollar support from the reserves, if necessary, he added.

The commerce ministry's request to the BB came against the backdrop of prevailing dollar crunch in the county's banking system, for which traders find themselves in difficulty to open LCs for importing required volumes of essentials.

Talking to the FE, former secretary of MoulvyBazar whole sale merchant association Golam Mowla said Monday import of some key commodities was facing a blow due to unavailability of necessary dollars from banks.

There has been short supply of some essentials, he said, adding that "if sufficient amount of such imports does not take place, it might create supply disruption in the market during the holy month".

Meanwhile, delivery of imported goods from some ships at Chittagong port was learnt to have been stalled for want of dollars.

As a result, importers concerned have been counting a significant amount of demurrage charges.

Analyzing government statistics, it is known that, generally, demand for some essential items increases during the month Ramadan. Of these, sugar demand increases manifold. In the first six months of the current fiscal year (FY), around 0.2 million tonnes of more sugar were imported than that of the corresponding period of the previous FY.

The annual demand for sugar in Bangladesh is 2.5 million tonnes. The local mills produce only 100,000 tonnes and the rest is imported. On average, 0.11 million (1.1 lakh) tonnes of sugar are required per month, according to the official data.

On Wednesday, Commerce Minister Tipu Munshi asked the deputy commissioners (DCs) to remain alert and to monitor the commodity market effectively in order to keep essentials' prices stable and supply normal during the upcoming month of fasting.

He put forward the direction while speaking to reporters at the fourth meeting with DCs held at Osmani Memorial Auditorium in the capital.

"We have instructed the DCs to take stern action so that unscrupulous traders cannot manipulate the price of essential commodities during the holy month of Ramadan," he added.

The district administrators have been instructed to take necessary steps to implement the measures taken by the government, he also said.

The commerce minister expected the DCs' efforts required for increasing trade in the country.

A good number of people said government authorities could not ensure fair price of rawhide of sacrificial animals during the last Eid-ul-Azha. So, the DCs have been asked to take steps regarding the matter, Mr. Munshi said.