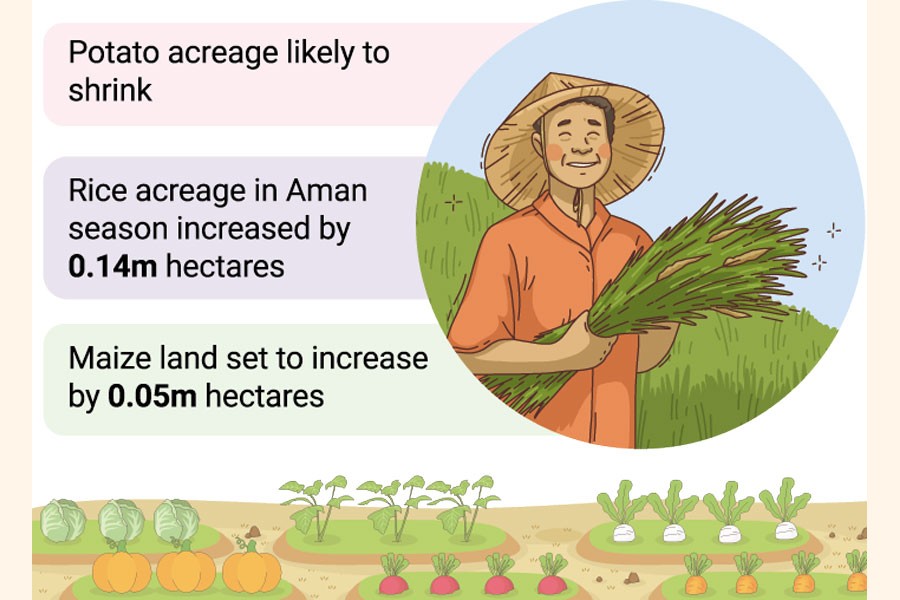 Most farmers in Bangladesh are switching to rice and maize farming for profitable prices amid global supply-chain strain, squeezing vegetable acreage in the country this Robi season, official statistics show.

Scarcity of fertiliser and irrigation in August-October period as well as a food-security concern forced many farmers into grain and corn cultivation, experts say.

Farmers have cultivated vegetables and leafy vegetables on 0.367 million hectares so far in the country against 0.428 million hectares in the corresponding period of last year, the monitoring and evaluation unit of the Department of Agriculture Extension (DAE) data, released on November 22, showed.

Overall target of producing veggie is on 0.61 million hectares for FY'23, of which 59 per cent have been achieved. The achievement was 70 per cent in the corresponding period of FY'22.

On the contrary, paddy acreage in Aman season increased to 5.8 million this season from 5.6 million hectares last year, according to the DAE count.

However, the fall in veggie and leafy production caused a rocketing price trend of vegetables in-between October and November 15 as most of the veggies sold at Tk 60-140 a kg in the city retail markets during the time, according to the Department of Agricultural Marketing and city vegetable vendors.

"Though the price of vegetable declined to some extent from last week amid the beginning of harvest in most of the districts at a time, the condition might change in coming months," says Imran Hossain Master, a Karwan Bazar-based vegetable wholesaler.

He mentioned that the price had declined by 15-20 per cent since last week in Bogura, Dinajpur, Rangpur, Cumilla, Narsingdi, Jamalpur, Jhinaida , Jashore and other hubs.

Supply of advance potato has not increased yet though it normally becomes cool from the third week of November. "We are still sourcing it at Tk 70-72 a kg," he said.

Onion plants have arrived and were selling at Tk 55-65 a kg.

Farm economist Prof Gazi M A Jalil told the FE that concern about food security as well as a rising trend in grain and corn prices encouraged farmers to grow paddy and maize in vast land.

"Shortage of urea and other fertilisers as well as rising costs of irrigation forced most farmers to choose a crop from which they could make profit and which could also enhance their food security," he says.

He says paddy and husked rice prices are much higher this year while maize farmers also gained a notable profit last season. These could further encourage cultivating the crops in the next seasons.

He feels that the trend might help the vegetable market remain vibrant also in coming months, which ultimately would raise sufferings of commoners already in an odd condition for higher inflationary pressure.

Director of horticulture wing at DAE Dr Md Saiful Islam says many farmers have gone for late-Aman or maize this year.

But average yield is much higher this year amid suitable weather which could compensate for total production, he said.

They are hoping for 14 million tonnes of vegetable and leafy from 0.61 million hectares of land this winter season.