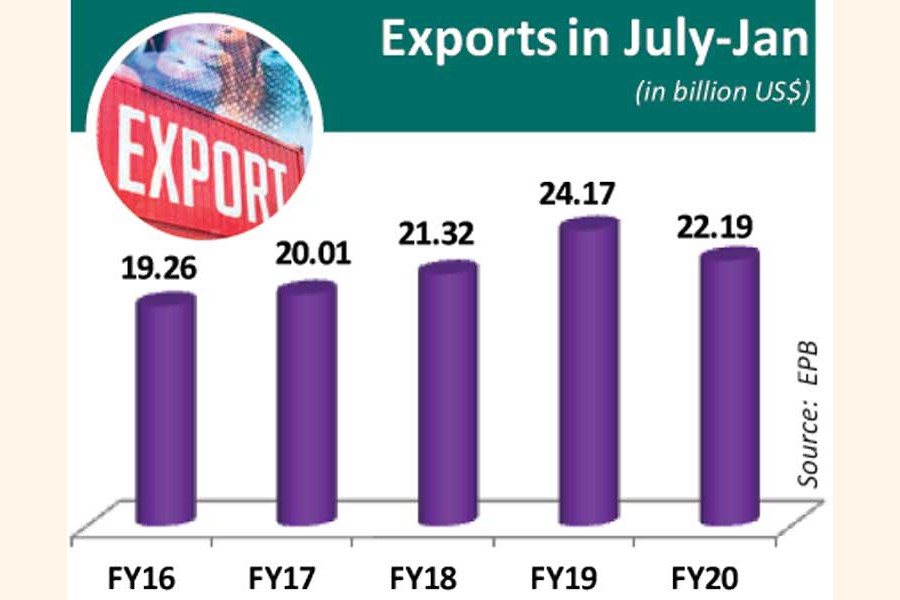 The country's merchandise shipments fell by 5.21 per cent in the first seven months of the current fiscal year over that of the same period of last fiscal year (FY).

The monthly export earnings during the period under review maintained a downtrend except in the months of July and December.

The total export earnings during the July-January period of the fiscal year (FY) 2019-20 reached $22.19 billion against $24.17 billion earned in the corresponding period of the last fiscal year.

The earnings also fell short of the target by 13 per cent set for the period, according to the latest data of the state-run Export Promotion Bureau (EPB).

The single-month export earnings in January last edged down by 1.70 per cent to $3.61 billion.

The ready-made garment (RMG) sector is the country's top foreign currency earner, accounting for more than 84 per cent of the total overseas sales.

Exporters and officials concerned attributed the overall fall in overseas sales to the declining export receipts from mainly apparel items.

Overall export earnings from the garment items, both knitwear and woven, fell by 5.71 per cent during the seven-month period of the current fiscal year.

Earnings from woven garments fell by 6.29 per cent to $9.44 billion, the EPB data show.

Proceeds from knitwear exports during the period fell by 5.13 per cent to nearly $9.62 billion.

The woven and knitwear exports fetched $10.07 billion and $10.14 billion respectively in the July-January period of last fiscal year.

Earnings from other key sectors also fell during the first seven months of the current fiscal year, compared with the period a year earlier.

"Though readymade garment exports in December and January were supposed to peak, they didn't," she said.

The prices did not go up after the minimum wage hike and the sector continued to grapple with the problems of overcapacity, coupled with a strong currency, she noted.

"I am afraid if the anti-export bias and a few perceptions that we are getting sufficient support do not end, then we will continue to be where we are and may expect worse," Ms Huq noted.

The volume of RMG exports, however, increased by 2.48 per cent in January last, compared to that a year earlier, the BGMEA chief added.

According to the EPB data, export earnings from leather and leather goods fell by 10.78 per cent to $558.9 million during the period under review from $626.42 million of the corresponding period of last FY.

Frozen and live fish exports fetched $337.33 million in the first seven months of this fiscal, registering a negative growth of 6.58 per cent.

The country brought in $40.53 billion from goods exports during the last fiscal, of which about $34.13 billion came from textiles and clothing alone, the data show.