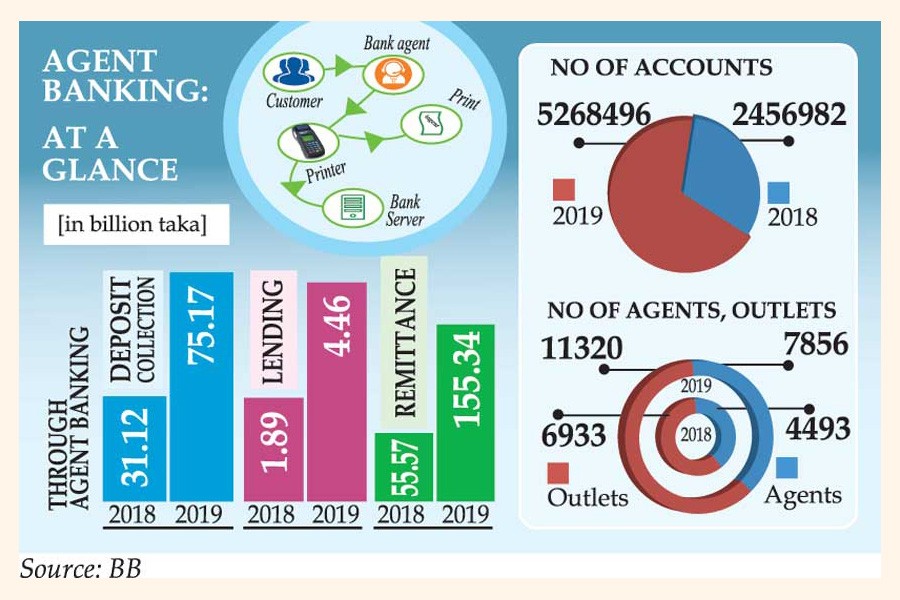 The agent banking is booming, mostly in rural areas, supported by a large inflow of remittances, according to Bangladesh Bank officials.

Agent banking is defined as financial services targeted to the underserved population through engaged agents under a valid agency agreement, rather than a cashier.

An agent banker is the owner of an outlet, who conducts banking transactions on behalf of a bank.

The volume of remittances inflow through this channel was recorded at Tk. 155.3 billion at the end of December 2019, up by 106 per cent over a year earlier.

This is equivalent to over 11 per cent of total remittances Bangladesh pulls in annually.

The bulk of remittances was transacted in rural Bangladesh.

This buoyancy in remittance growth was significantly higher than the total deposits of Tk. 75.2 billion with the system in December in 2019.

The central bank statistics shows that the growth in such banking in urban areas got momentum only in 2019, although the number in cities is still below one-fourth of rural agents.

While 21 commercial banks, mostly private lenders, own licences, 19 are operational.

Cumilla, Chattogram, Kishoreganj, Mymensingh, Jasohre, Noakhali and Munshiganj are the major hubs of the agent banking.

People involved in agent banking said the buoyant remittances, thriving rural farm and non-farm activities are the main drivers of the system's growth in the countryside.

Bangladesh gave the approval for such banking in 2014.

And Bank Asia, a private bank, is believed to be the pioneer of the system, although it existed in many parts of the world, including in Africa.

The people said the dropout rate remained negligible with the banking and this is narrowing the gap between unbanked and banked population fast.

"Roughly, 65 per cent population remains unbanked, our aim is to reach them," said Arfan Ali, managing director of Bank Asia.

Mr Ali said that the lending rate in rural areas is currently poor, but he expressed the hope that it will increase as the system takes root.

Loan disbursement by 19 holders of licences of agent banking strengthened in 2019 with an aggregate disbursement of Tk 4.4 billion.

Agent banking is a system through which a financial institution extends services without opening a bank branch.

A person or institution can open such an outlet by investing between Tk 300,000 and Tk 500,000. He or she has to keep some cash to meet daily transaction.

"If an outlet needs Tk 1.0 million a day, he/she must have such liquid assets," said an officer at the agent banking wing of the Bank Asia.

The banks provide a commission to the agents ranging from 1.0 per cent to 3.0 per cent depending on the nature of the deposits.

Such type of banking in rural areas helps women deposit their money earned from, for example, rearing of domestic animals and cultivation of vegetables.

Owners of agent banking said that they have been operating like full-fledged banks. They provide all kinds of services the banks offer.

Islam Sheikh, an owner of an agent bank at Sirajdikhan Upazila under Munshiganj, told the FE that his outlet has handled over 4,000 clients since 2014.

"People come to us as they can save both time and money by holding an account with."

"They don't need to carry cash and they can withdraw remitted money easily," Mr Sheikh said.

He said so far, no unwanted incidents have taken place as they maintain safety by complying with banks' instructions regarding safety and business continuity plan.

"We've small vaults and we transfer money to a nearby bank branch as soon as we can," he said.