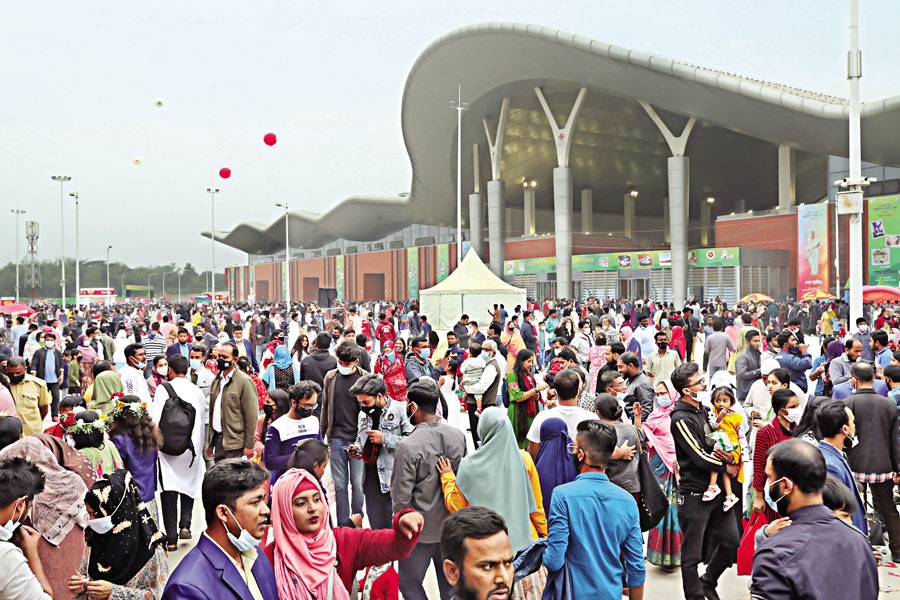 The 26th Dhaka International Trade Fair (DITF)-2022 has yet to raise the traders' expectations mainly due to inadequate sales for lower customer turnout, according to the participants.

On the 14th day of the fair on Friday, weekly holiday, the organisers said as the fair has been organised for the first time at Bangabandhu Bangladesh-China Friendship Exhibition Center (BBCFEC) in Purbachal, it may take a bit time for the visitors to get habituated to the new place.

Meanwhile, traders said due to change of the fair venue from Sher-e-Bangla Nagar to Purbachal, outskirt of metropolitan area, sales dropped to a third for scarcity of customers.

During a spot visit on the day, the FE correspondent found relatively a thin flow of visitors into the DITF which usually was seen jam-packed on the public holidays when it was arranged at its previous site.

Besides, the visitors were seen defying health guidelines at the fair despite repeated requests from the organisers to wear face masks with the resurgence of the coronavirus in the country in recent weeks.

Nahar Binte Yusuf, a housewife from the city's Tejkunipara who came to the fair with her children and two other relatives, said it took her over two hours to reach the venue due to long distance.

"There are no direct public transports to come here (Purbachal), so we had to change vehicles twice to reach the destination," she said, adding they had to come to Kuril Bishwa Road first from Farmgate and then take a CNG-run auto-rickshaw to finally reach the venue.

Another visitor, Md Habibur Rahman, who came from Moghbazar, said the government has arranged BRTC busses from Kuril to DITF venue but the number of the busses is low compared to the visitors.

"Most of the people coming here are hiring CNGs from Kuril that charges Tk200 to Tk 300 which is too much," he said.

The government has deployed 30 BRTC buses for the DITF-goers that operate from 8am to 10pm every day; and the ticket price is Tk25 per head.

The fair, jointly organised by the Ministry of Commerce and Export Promotion Bureau (EPB), has accommodated around 23 pavilions, 27 mini pavilions, 162 stalls and 15 food stalls this year.

However, a number of stalls were seen empty at the fair ground this year while some others were exhibiting fewer items than usual.

Aminur Rashid, a sales person of one such stall named Rajdhani Clothing, told the FE that they have projected that due to the distance of the fair from the main city and Covid-19 situation, sales would be lower this year.

"We have not decorated our stall with excessive clothing items this time on the backdrop of negligible demand," he said.

Dulal Hossain Rocky, a sales person of Jamuna Electronics pavilion, said compared to last year, their sales dropped to a third as the number of visitors is still very low.

However, he hopes that people may come to the fair during the closing week to cash in on different discounts.

According to the Messers Meer Brothers, the ticket leasee at the DITF at the Sher-e-Bangla Nagar venue, said ticket sales would reach about Tk2.0 to Tk3.0 million on Fridays but at Purbachal, it dropped to Tk0.5 million last Friday (Jan 07) while the amount might be the same too this week.

However, many of the visitors have expressed their satisfaction over the management of the permanent venue for the DITF due to its specious walkways, planned and organised placement of stalls, and sufficient toilet facilities.

Though like every other years, visitors complained about the food stalls that mostly sell substandard Biriyani at relatively higher prices.

The BBCFEC, constructed at a cost of Tk8.17 billion, is consisted of about 33,000 square metres of space which will host the DITF the permanent venue from now on.

The gate of the trade fair opens at 10 am every day and closes at 9:00 pm, except for the weekly holiday- Friday and Saturday- when it remains open till 10pm.

The price of a ticket for an adult visitor is Tk40 while it is Tk20 for an underage child.