Saudi cos plan to invest $10b 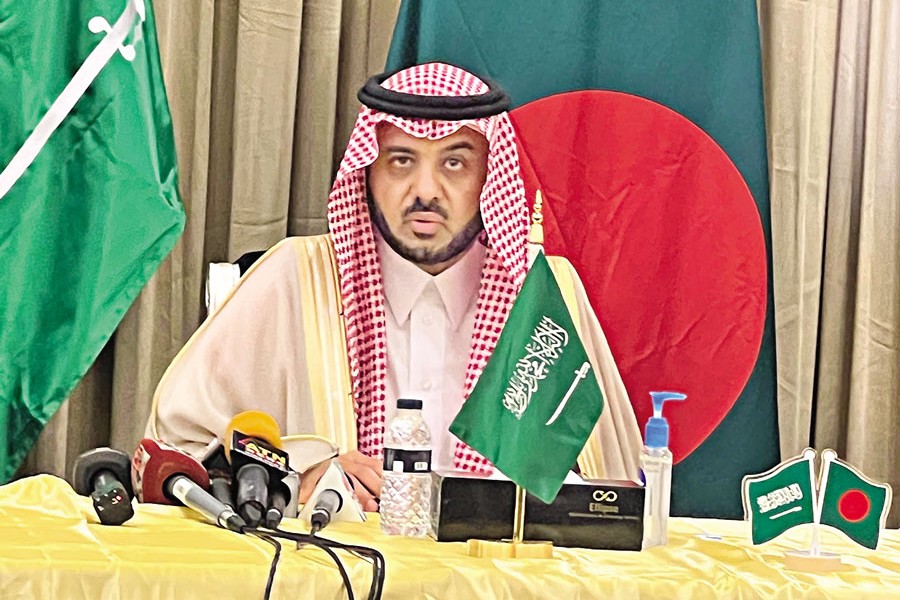 He was briefing in the city a group of journalists on the projects of the King Salman Humanitarian Aid and Relief Centre projects in Bangladesh.

Prominent companies, including Aramco, Aqua Power and Red Sea Gate, from the Kingdom of Saudi Arabia (KSA) are going to invest in several projects in different sectors in Bangladesh, he mentioned.

The Saudi ambassador said that his country is going to sign several MoUs on defence and security cooperation in a bid to strengthen the existing military ties.

He informed that a high level Saudi delegation is coming to Bangladesh soon to discuss in details on how to expand cooperation in different areas.

They will also discuss the issue of energy cooperation between the two countries, the envoy said when asked what steps Saudi Arabia can take to help Bangladesh in getting energy at subsidised prices.

Referring to cooperation in manpower sector, the envoy said his country accommodates over 2.6 million Bangladeshi workers who send more than 3.5 billion dollar back to their country annually.

"Every day we issue 5 to 8 thousand visas to Bangladeshis from our embassy," the ambassador said.

About the centre he said, the Custodian of the two Holy Mosques, King Salman bin Abdulaziz Al Saud, established the King Salman Humanitarian Aid and Relief Center on May 13, 2015 to serve as the kingdom's humanitarian representative to the rest of the world.

The centre's purpose is to provide humanitarian and relief aid outside of the kingdom. Saudi Arabia is the third largest donor country worldwide.

"The King Salman Humanitarian Aid and Relief Center team is here today to monitor the ongoing projects in Bangladesh. The team is collaborating in Cox's Bazar with UNICEF and the Islamic Development Bank, who examined the project's progress to provide primary healthcare for Rohingya health and nutrition," he stated.

"Additionally, the voluntary medical initiative to fight blindness and its causes in Bangladesh was integrated by the King Salman Humanitarian Aid and Relief Centre (recently)," he noted.

The King Salman Center's plans for this year include 100 project under the Noor Saudi volunteer programme to fight blindness in more than 30 nations," he added.

Bangladesh received a significant amount of funding in seven projects of which three have already been carried out and the rest will be completed in the near future, he said.