Seven handed down death, one acquitted

Attack an attempt 'to assassin non-communal character' of Bangladesh 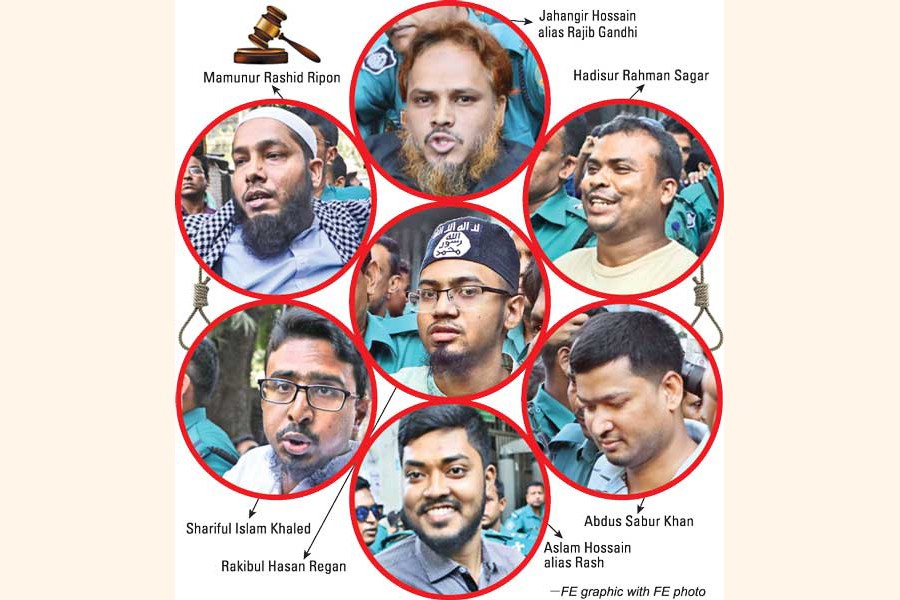 A Dhaka court on Wednesday awarded death penalty to seven accused for their involvement in the 2016 Holey Artisan café attack that killed 22 people, including 17 foreigners.

Judge of the Anti-Terrorism Special Tribunal of Dhaka, Mohammad Majibur Rahman delivered the verdict in a crowded courtroom in the city. The judge ordered that the convicts to be hanged.

Another accused Mizanur Rahman, alias Boro Mizan, was acquitted from the case as allegations brought against him could not be proved.

The judge read out the judgment amid tight security in presence of the convicts, who were taken to the court at around 10:15 am.

In his observation, the judge said, "I tried to ensure justice. The Holey Artisan café attack was an attempt to assassin the character of a non-communal Bangladesh."

"The attack was also an outbreak of insanity, cruelty and brutality of the militancy," he added.

The members of the neo-JMB along with a section of JMB conducted the horrific attack on the bakery to destabilise the public safety and to draw the attention of the international militant organisation ISI, the court said.

After hearing the verdict, all the convicts became upset and started shouting at the judge.

After the verdict was delivered, metropolitan public prosecutor Abdullah Abu told reporters they are "satisfied" with the judgment, but they expressed concern over the acquittal of an accused.

"We will take decision in this regard after the release of the full judgment," the public prosecutor said.

A counsel of the defence team expressed dissatisfaction, saying they would challenge the death sentence verdict.

Lawyer Delwar Hossain said, "We think the witnesses were not without doubt. There are so many contradictions, inconsistencies and the lack of collaboration."

"We will appeal against the judgment with the High Court," he said. The counsel said his clients did not get justice. The verdict was given based on faulty evidence, he noted.

On November 17, the tribunal set November 27 for delivering its verdict in the café attack case after concluding the hearing.

On July 1, 2016, armed militants stormed the café located in the capital upmarket Gulshan area and killed nine Italians, seven Japanese, two Bangladeshis, one Indian and one Bangladesh-born US citizen.

Two police officers were also killed during the 12-hour drive.

On July 4 that year, sub-inspector Ripon Kumar Das filed a case with Gulshan police station under the Anti-Terrorism Act accusing six named and some unknown people of creating "unrest" in Bangladesh and trying to turn it into a "terrorist state."

During the trial process, which ended in less than a year, several witnesses, including former North South University teacher Abul Hasnat Reza Karim, his wife, owner of the café, and top police officials narrated the horrors during the attack.

On November 26, the tribunal framed charges against the eight. And on December 03, the trial in the sensational case began formally with the deposition of witnesses.

North South University teacher Hasnat Karim, who was held hostage, but later detained, got acquittal since there was no evidence of his complicity with the attack, according to the police.

Police investigation later found the involvement of 21 militants in the attack. Five of them were killed in the operations, eight in anti-militancy drives later.

According to the charge sheet, the suspects carried out the attack to destabilise the country. They also wanted to put the government under pressure, force investors and foreign consultants to leave the country while destroying the economy.

Local and foreign observers were present during the announcement of the judgment.

The law-enforcement took extra security measures in the court area as Dhaka's Anti-Terrorism Special Tribunal was set to deliver the verdict.

Hundreds of Rapid Action Battalion and police members were deployed in and around the court premises.