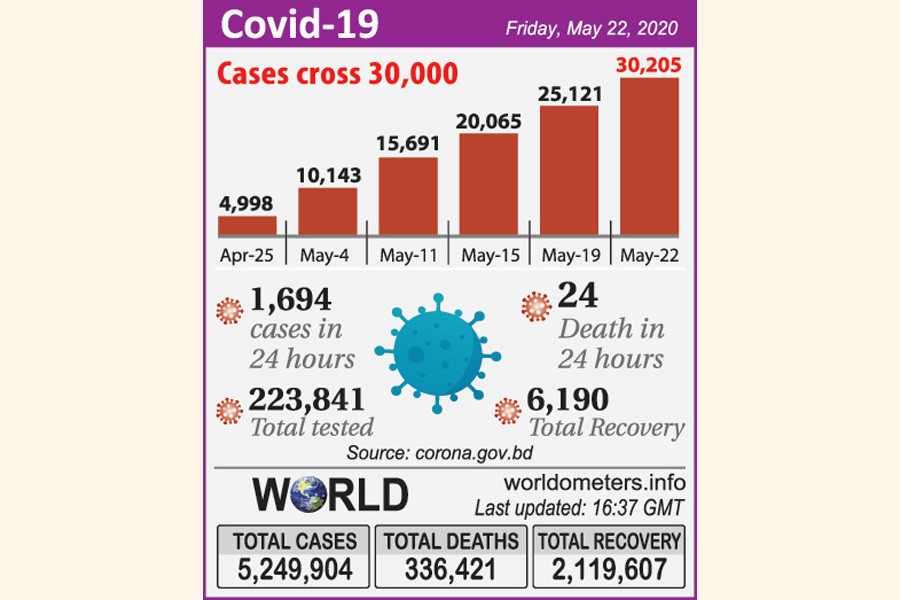 With 1,694 fresh coronavirus cases recorded in the past 24 hours ending on Friday morning, the Covid-19 tally crossed the 30,000 mark in the country, according to the Directorate General of Health Services (DGHS).

During the same period, the densely-populated country also saw the single-day highest number of deaths of 24 people.

The fast growing numbers of fatalities and infections indicate that the country is going through the worst time of the highly infectious virus.

Paying no heed to the alarming spread of coronavirus, Eid holidaymakers, however, started leaving the capital in large numbers by private vehicles which were recently exempted from the shutdown.

Officials and caregivers expressed serious concern over mass departure of people, especially at a critical time when the highly contagious pathogen keeps spreading at an alarming pace.

They feared that it could jeopardise the country's overall preparedness to stem the spread of the viral infections.

At the virtual news bulletin on Friday, DGHS additional director general (administration) Prof Dr Nasima Sultana said a total of 9,727 samples were tested in 47 labs across the country since Thursday morning.

Of the tests, some 1694 samples were found Covid-19 positive while 24 more deaths were recorded across the country during the period, she said.

"This is the highest number of Covid-19 deaths that the country recorded so far in a day. With these numbers, the overall tally of confirmed cases and deaths rose to 30,205 and 432 respectively," she added.

Thirteen of the deaths were reported from Dhaka division, nine from Chattogram, one each from Barishal and Mymensingh divisions.

Also, a total of 588 infected patients recovered from the deadly viral disease in the last 24 hours, she said, adding that a total of 6,190 people have so far recovered.

In the past 24 hours, a total of 225 people have been put under isolation and with that, a total of 4,060 people are now in isolation, according to the DGHS sources.

Besides, 54,923 people are currently on home and institutional quarantine, they said.

Terming it a war-like situation for the nation, director (MIS) of the DGHS Habibur Rahman said people should fight the coronavirus jointly.

"Please stay indoors and don't go outside in this critical time. Your departure could endanger you and your family members. You will get enough time to spend with your family once things improve," he said.

However, Eid holidaymakers along with family members were seen leaving the capital by hiring cars and micro-buses soon after the government lifted restrictions on private vehicles ahead of Eid-ul-Fitr.

People involved in rent-a-car business said they saw unprecedented pressure of booking of vehicles from the early hours of Friday following the withdrawal of the restrictions.

"The inflow of Eid travellers keeps growing even though most of their transport has already been booked," said Mohammad Himel, who runs rent-a-car business.

Globally, over 5.2 million people have been infected by the novel coronavirus and 33,5191 died until 6:30pm on Tuesday, according to the worldometer.