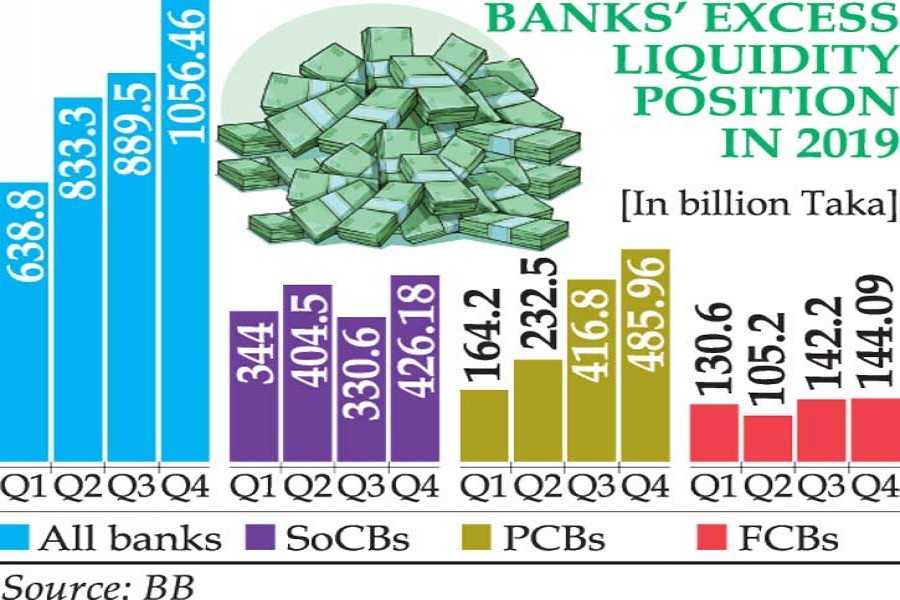 Banks' excess liquidity has crossed the Tk 1.0 trillion-mark again, fuelled by lower private credit growth in a sign that the investment situation has cooled.

The country's banking sector has been saddled with excessive funds since the second quarter of 2019 as the private sector credit growth was slower, according to bankers.

"There is no sign of excess liquidity in the banking system being ebbed, though the government continues to borrow from banks," a senior central bank official told the FE on Wednesday.

But he insisted the extra liquidity does not mean "idle money" for the banks.

"The major portion of excess liquidity has already been invested in government securities as risk-free investments for banks," the central banker noted.

More than 65 per cent of total liquid assets were invested in the government securities, known as unencumbered approved securities, until December 2019, which was 62.62 per cent in May last year, according to the central bank report on the liquidity position of banks.

That is unlikely to push up the private credit growth in near future as most of the banks are reluctant to provide fresh loans, though the government and top bankers had agreed to bring down both lending and deposit rates to a single-digit from April 01.

After a meeting with the chairmen and managing directors of private banks on December 30, finance minister AHM Mustafa Kamal announced the decision.

Senior bankers acknowledged the majority of banks are following a conservative approach to sanctioning and disbursing fresh loans and this has pushed down the private credit growth in recent months.

The sector's credit growth fell to 9.83 per cent in December 2019 on a year-on-year basis from 13.20 per cent a year earlier, the central bank data shows.

Mr. Husain predicted that the falling trend in private sector credit growth would continue until April.

The senior banker also said trade financing may fall further if the outbreak of coronavirus in China smolders on. China is the largest trading partner of Bangladesh.

The private banker said foreign trade-or export and import--with China has hit a bump in the aftermath of the epidemic that has so far killed more than 1,000 people in the world's second-largest economy, after the United States.