It also says some 36 per cent of total domestic product or a sum of Tk 9.15 trillion is excluded from the taxation of a financial year's tax base. 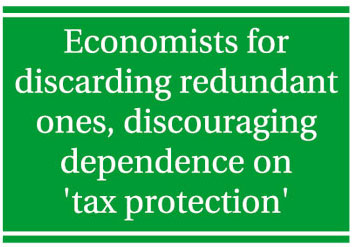 The amount is equivalent to more than three consecutive fiscal years' tax revenue-collection targets of the government, the FE analysis shows.

In the current FY, the government has set a Tk 3.30-trillion tax revenue-collection target, just as the original target of last FY.

Following widespread allegations of the country's poor tax-GDP ratio in South Asia, below 10 per cent, the country's tax authority conducted the study to assess the volume of tax exemptions that have been eating up revenue.

The internal study of the National Board of Revenue (NBR) has compiled the data of tax exemptions taking FY 2018-19 a base year in its report.

A seven-member 'tax expenditure review committee' prepared the report titled 'Tax Expenditure Analysis: An overview of Tax Expenditure through Personal and Corporate Income Tax Policy of Bangladesh'. It was placed with the NBR chairman on November 28, 2021.

"This ratio assumed to be valid in the medium term (3-5 years) because the sectoral share of GDP does not exhibit abrupt change and the tax exemptions are effective for the concerned period," the report says.

The study shows tax-breaks caused losses of about Tk 80 billion per year from transfer of land property.

If tax is exempted for industrialization it can contribute to generating indirect tax such as VAT, customs duties etc, he added.

The NBR has to think on broader aspect rather than thinking on only short-time revenue mobilisation, he noted about the logic behind such taxation measure.

"Loopholes in the system, corruption, tax evasion and other leakages should be checked through effective and efficient supervision rather than tightening grip on growth incentives," the economists says.

Executive Director of the Policy Research Institute (PRI) Dr Ahsan H Mansur suggests that in every fiscal year's budget there should be a tax-exemption analysis to review new one and phase out previous ones.

Reduction in dependence is necessary on tax-protection scheme in the domestic industry as it would not exist after the country would graduate from the least-developed-country status, he said. He feels that the policymakers should discuss the tax-exemption issues and its associated revenue loss in parliament "rather than clapping in the House".

"Time-bound exemption should not be renewed as it prompts infant industry to remain dependent on tax protection," he says.

Talking to the FE, income-tax policy member Md Shams Uddin said he was not member of the committee but there will be another extensive study on tax expenditure as this one has some limitations. The committee recommended a more rigorous study to rationalise the level of tax expenditure.

"There should be no arbitrary exemption. A policy needs to be formulated based on macroeconomic variables in allowing tax exemption. The coverage of cost-benefit analysis should not focus on revenue collection only," the committee recommended.

Protection of moral hazard prior to allowing tax exemption and cautious step to refrain from adverse selection are important.

"As income tax is a tax on income or profit, it should be the last option to give any exemption otherwise it will distort progressivity and equality," the report reads.

"No exemption should be discriminatory and its area should be narrow, well-defined and for a limited period," he added.

It recommended revisiting tax exemption in fisheries sector, further analysis of the tax breaks for BEZA and BEPA to check whether it is creating economic distortion and affection of competition.

The committee recommended not using tax exemption as a primary tool to attract foreign direct investment but removing other hurdles.

It says the tax exemption should be reviewed periodically following a set of guidelines.

"A 2.28-per cent tax expenditure-to-GDP ratio can be a concern for a growing economy like Bangladesh."

The committee recommends using the result of the study at the policy level.