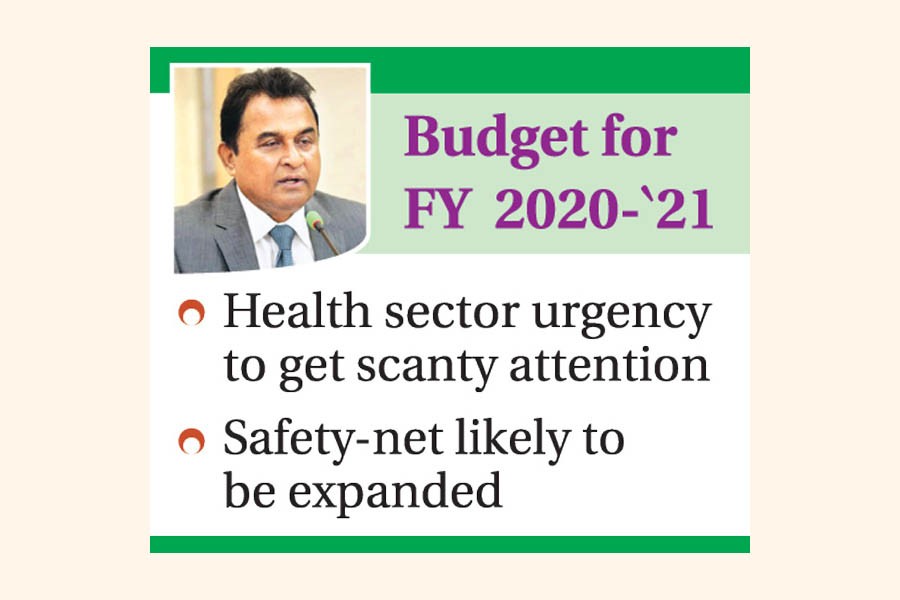 The government unveils the budget for fiscal year 2021 today (Thursday) expanding the social safety-net, but the health sector, as indications are available, is likely to get scanty attention despite the pandemic-spurred public health emergency.

Finance minister AHM Mustafa Kamal is set to place the budget proposal for the next fiscal in parliament at 3:00pm.

Officials involved in the budget preparation insisted areas like health sector, social safety-net, food and agriculture have been prioritised as a strategy for keeping the deadly virus at bay.

But the slight increase in health allocations is unlikely to give a boost to the fight against lethal virus.

Mr Kamal is set to place the fiscal blueprint before Jatiya Sangsad with a record outlay of Tk 5.68 trillion. Last year's budget size was Tk 5.23 trillion.

The budget, which will be the country's 49h since Independence, aims to allocate 3.0 per cent of GDP for social safety net programmes, over 1.0 per cent of GDP for the health sector and Tk 1,070 billion as subsidies for agriculture. It is the 12th budget in a row by the ruling Awami League government.

The businessman-turned-politician's budget speech will be brief, finance officials told the FE.

Of the Tk 5.68 trillion, the authorities will chase Tk 3.82 trillion coming from the National Revenue Board (NBR), non-NBR and non-tax revenue. The NBR alone is supposed to contribute Tk 3.30 trillion.

The budget deficit will break away from its traditional 5.0 per cent band of GDP, with the imbalance reaching 5.8 per cent after many years.

The GDP growth rate may be targeted at 8.2 per cent while the rate of inflation at 5.4 per cent, people familiar with the matter said on Wednesday.

A senior official at the finance division said the budget has focused on the areas which are relevant to cope with the challenges of the pandemic. He said the title of the budget will also reflect theme of how to recover from the coronovirus impact.

But economists said Mr Kamal is going to present his second budget at a time when the economy faces both external and internal pressures amidst outbreak of coronovirus that has so far claimed over 1,000 lives.

The Centre for Policy Dialogue, in a recent budget programme, said that the government should explore new opportunities abroad for financing its budgetary spending.

He said if the government does so, that will not be effective in minimising the sufferings of the vulnerable people.

Dr Mansur said there is a need for special programme for the people, who became unemployed as a result of the pandemic.

He said the government may collect the numbers of unemployed people from different organisations.

"They should be paid through the mobile financial system," he told the FE. He was critical of preparing the list of vulnerable people by local representatives. "We need to identify genuine sufferers and feed them," he argued.

Dr Mansur said the future of economy will depend on how efficiently the government tackles the coronovirus crisis next year.

Dr AB Mirza Azizul Islam, a former finance adviser said the priority areas of the government look appropriate, but there is a need for curbing corruption in the social safety-net programmes.

Referring to the recent irregularities over the distribution of relief stuffs, he said the government should pay more heed to combating corruption, otherwise the genuine people will starve.

Like the previous years, the budget this year too will be presented on power point and all 10 fiscal documents will be made available on the website of the finance division -- www.mof.gov.bd.

Mr Kamal will speak at a post-budget press conference through virtual platform tomorrow (Friday) at 3:00 pm.