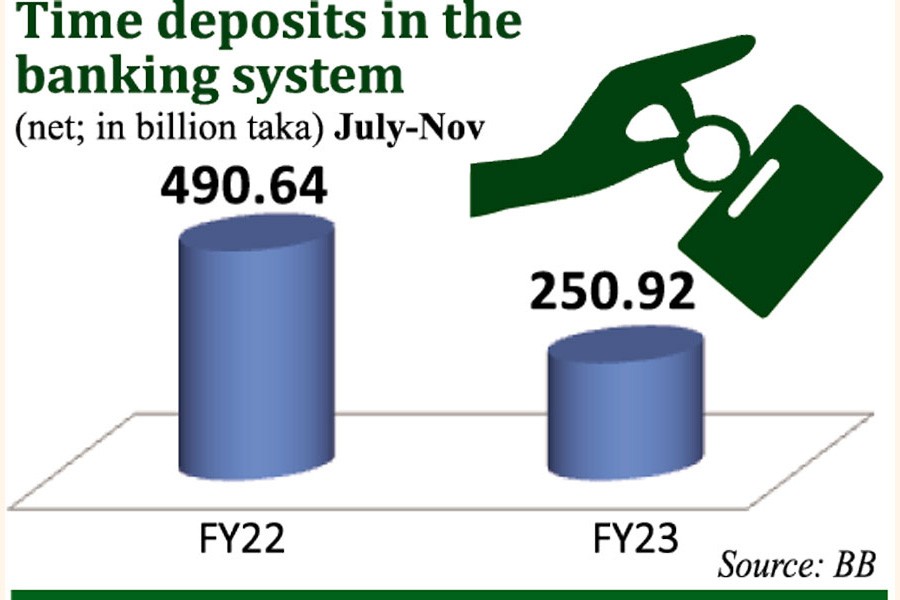 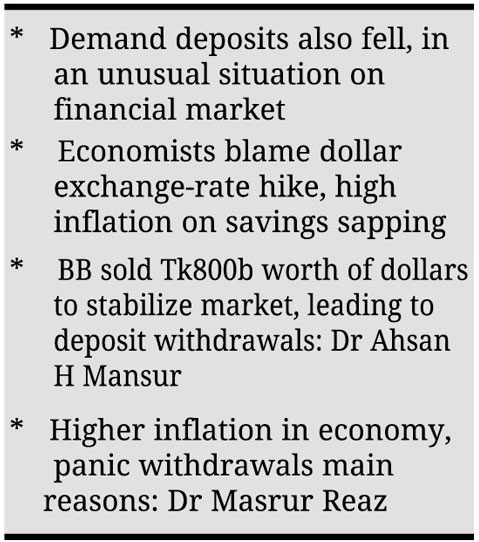 Time deposits in Bangladesh's banking system dropped by nearly 49 per cent or Tk 250.92 billion during July-November 2022, year on year, in a situation that usually does not happen on the financial market.

The usual trend of such accounts is that both aggregately expand by double digits-by 15 per cent or above.

People in the industry told The Financial Express that such downturn in the banking system is mainly due to massive drain on the fixed deposit-category accounts.

The state-owned organisations, for example, Bangladesh Petroleum Corporation (BPC) and Bangladesh Chemical Industries Corporation (BCIC), withdrew money from their FDR accounts to meet their cash requirement to purchase the US dollar amid a crunch.

Bangladesh Bank Governor Abdur Rouf Talukder recently told the media that there was huge withdrawal of funds from the banking system by the state-owned institutions. The Governor, however, said the growth was still around 8.0 per cent.

One senior central banker told the FE Wednesday that the government institutions need such money mainly to purchase the dollar the exchange rate of which has shot up over 14 per cent over the past six months since June.

They, however, said the funds found way into the central bank's coffer.

Economists, however, argue that the main reason is higher inflation forcing many to draw on their savings.

They also point out that the government has sold out a huge amount of dollar to the market, leading to the withdrawal of money from the banking system.

Dr Ahsan H. Mansur, executive director at the Policy Research Institute of Bangladesh or PRI, told the FE that Bangladesh Bank (BB) sold out at least Tk 800 billion worth of dollars to stabilize the market, leading to withdrawal from the deposits.

He also pointed out that financial account of the balance of payments (BoP) usually had a surplus. Last year, the financial account had over US$14 billion in surplus, which now turns negative. This means people who used to send funds to Bangladesh refrained from doing so.

"Financial account being negative means the expected funds did not come into the country from outside the country," the economist says.

Many non-resident Bangladeshis, and even foreigners, used to send funds to get financial benefits from Bangladesh's financial market.

On the other hand, Dr M. Masrur Reaz, chairman at the Policy Exchange of Bangladesh, cites two main reasons: higher inflation in the economy and panic withdrawals.

He said people cannot afford it on their present income. "They have been withdrawing money from their deposits," he told the FE.

Dr Masrur also mentioned that there was panic withdrawal as there were some scams in the banking sector.

When contacted, officials of a number of SOEs told the FE that they used to share their profits with government as "non-tax revenue". This is one of the reasons behind the withdrawal of money from the deposits.

One senior official at BCIC told the FE that they withdrew funds from the banks to deposit with government exchequer.

"We have to share out profits with the government exchequer, and this is one of the reasons for such withdrawal in November," he said, wishing anonymity.